Each year, the Department of Agriculture, Food and the Marine (DAFM) in collaboration with Met Éireann, UCD, Teagasc and Animal Health Ireland advises farmers of the predicted risk of disease caused by liver fluke (Fasciola hepatica) infection in livestock for that autumn and winter. Read more here

High risk in the west, little risk in east

This year’s forecast is based on meteorological data gathered between May and October 2021 by Met Éireann, as well as other sources, as outlined below.

The Ollerenshaw Summer Index 2021 indicates occasional losses with the exception of the west and northwest where a high prevalence of the disease is predicted. In contrast, little or no disease is anticipated in parts of the east.

The low values for the summer index are due to the dry conditions that occurred generally in June and September 2021, and particularly in the east. Somewhat wetter weather conditions prevailed in the west and north. 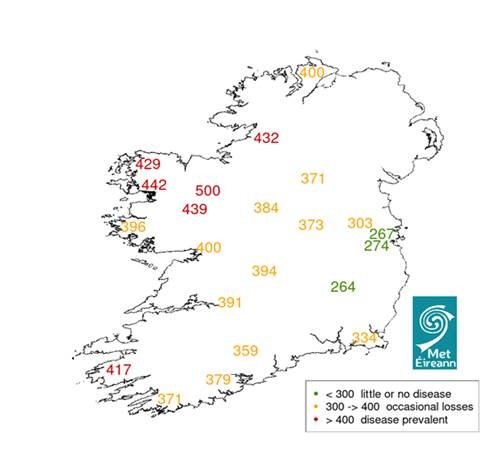 Figure 1. Ollerenshaw Summer Index values 2021, and the risk of disease due to liver fluke

Since 2015, from June to December, DAFM has collected blood samples from lambs in meat factories from a proportion of flocks at the time of slaughter. These have been tested for the presence of liver fluke antibodies to determine the timing and geographical spread of liver fluke exposure in grazing lambs. The number of flocks selected for sampling from each county is intended to be proportionate to the sheep population of that county over the entire sampling period (June to November 2021). A number of samples are taken from each selected flock and these are pooled at laboratory level. The presence of liver fluke antibodies in 2021 born lambs is therefore a sentinel for exposure to liver fluke in the wider sheep population in the region, as by definition these lambs must have been exposed during the 2021 grazing season.

Blood samples from 466 flocks from July to September 2021 across 26 counties were tested for the presence of liver fluke antibodies (Table 1). Data from this survey indicates that the majority of infected flocks are from counties on the western seaboard. Some positive and inconclusive results were found in counties outside of the West and the Northwest in the August testing, possibly associated with a high summer rainfall level. By October, as well as a lot of positive and inconclusive results in counties on the western seaboard, there was substantial evidence of fluke exposure in lambs from the border areas, midlands, South and in Leinster.

The Beef HealthCheck programme, run in partnership with Meat Industry Ireland, collects and reports liver fluke information in cattle at slaughter from participating meat factories. Overall, this year’s levels of liver fluke challenge were slightly lower than those reported in 2020. To date, an average of 45% of herds showed at least one animal with liver damage due to liver fluke at slaughter and live liver fluke parasites were seen in 13% of herds. Counties in the northwest of Ireland were more heavily affected, with 70-80% of herds in Sligo, Donegal and Leitrim reported to have signs of liver fluke at slaughter. It is important for farmers to know whether liver fluke is present on the farm and to treat accordingly to avoid production losses. The Beef HealthCheck reports on livestock from particular holdings and can be a useful tool to understand liver fluke on-farm and are available to farmers on ICBF . Visit Animal Health Ireland for further details on the programme.

In order to assess the risk of liver fluke disease on any particular farm, various environmental factors, particularly climate, landform and soil type (especially whether soils are heavy or free draining) must be taken into account. This is because the intermediate host of the parasite, which is a mud snail (Galba truncatula), occurs in soil that is slightly acidic and muddy. Thus, areas of fields with rushes or wet patches (e.g., around gates, troughs) are particularly important with regard to liver fluke risk for maintaining a population of the infective stage of the parasite.

In addition, livestock owners should factor in prior liver fluke history on the farm as this is an important indicator of future disease risks.

Liver fluke infection tends to be chronic in cattle, resulting in ill-thrift and poor performance. Though chronic disease can also occur in sheep, infections may also result in more acute clinical signs, and sudden death in cases of heavy challenge.

Livestock owners should continue to be vigilant for any signs of illness or ill-thrift in their animals and should consult with their private veterinary practitioner (PVP) if they are concerned. In cases where the cause of death is not obvious, it is recommended that carcasses be referred by a PVP to the local Regional Veterinary Laboratory for post-mortem examination/necropsy.

Information from abattoir examination of livers of previously sold fattened stock is also a valuable source of information for livestock owners on the prevalence of liver fluke infection on their own farm or on the efficacy of their control programme.

In areas of high risk and on farms where liver fluke infection has been diagnosed or where there is a prior history, livestock owners should consult with their PVP to devise an appropriate treatment and control programme.

When using flukicides to control and treat liver fluke infection, particular attention should be given to dosing cattle at the time of housing or shortly thereafter, and sheep in autumn or earlier in the year, where indicated by faecal examination results or prior disease history. For sheep, a drug effective against early immature as well as late immature and mature flukes should be used to protect against acute disease. In addition, sheep should be moved from affected pasture to prevent re-infection. If the flukicide given to cattle at housing is not effective against early immature fluke, then faecal samples should be taken six to eight weeks after housing and tested for the presence of liver fluke eggs. This will determine whether a follow-up flukicide treatment is necessary.

Given that flukicides do not have a persistent activity, any cattle or sheep that are out-wintered are at risk of further infection post-treatment and follow-up flukicide treatments may be necessary. This is especially so if they remain on high-risk pastures. In this case, it is advisable to monitor livestock for the occurrence of re-infection.

Veterinary advice should always be sought on treatment protocols and on the appropriate interval at which such treatments should be given. Testing faecal samples for the presence of liver fluke eggs can help determine both the need for and success of flukicide treatments. This is especially important given that resistance to flukicides is becoming increasingly widespread. In addition, bulk milk testing for liver fluke antibodies may be useful in dairy herds to monitor variation in exposure.

Where feasible, and as a long-term control option, areas of farms that provide suitable habitat for the mud snail such as wet muddy areas should be either fenced off or drained. This will result in a permanent reduction of snail habitat.

What about Rumen Fluke?

The rumen fluke, Calicophoron daubneyi, which has become more prevalent in Ireland over the last number of years in both cattle and sheep, uses the same intermediate host as the liver fluke. The pathogenicity of rumen fluke is mainly due to the activity of the juvenile stages in the intestine, while the presence of adult flukes in the rumen is not associated with clinical signs.

Further details on liver fluke and its control and information on flukicide selection for cattle along with information on the Beef HealthCheck programme are available at http://animalhealthireland.ie/?page_id=405.

Please note that from January 28, 2022, farmers will require a veterinary prescription in order to be able to purchase antiparasitics for use in food-producing animals.