The aim of the programme is to demonstrate to beef farmers how they can produce a quality product as efficiently as possible to make beef farming more profitable, while also making it more environmentally and socially sustainable.

At this stage all cows and store cattle have been turned out to grass. Some U16 month spring born bulls have been drafted for slaughter, with the majority expected to be killed before the end of June on the Future Beef farms. Grass growth was slow on some farms during April, but most farms are on at least their second rotation by now and plan to cut silage from mid to late May. Breeding has started on the spring calving herds and calving is almost complete.

James Skehan from Ballynevin, O’Briensbridge, Co. Clare is farming 34ha of grassland in two land blocks. He has 24 spring calving suckler cows and started his breeding season on 26th March as he wants to calve all his cows between January and April next year. James is focusing on breeding all his cows to a high terminal index bull and plans to buy in future replacements. He is using a 2016 born Limousin stock bull on the farm with a terminal index of €132, a beef cow calving difficulty of 3.6% and beef heifer calving difficulty of 10.4%. His carcass weight figure is 25.4 kg which is higher than the breed average of 23.65kg, and his carcass conformation is 2.47 which is also higher than the breed average of 2.17. James does not plan to breed or keep any replacement heifers from the bull as his replacement index is only €97. When he looked at his ICBF Eurostar report, the bull’s daughter milk figure is -0.3kg and the daughter calving interval is +3.76 days. His beef heifer calving difficulty is also high. Therefore he is not suitable for breeding replacements.

When buying replacements, James is looking for a balanced cow, he wants a cow that is at least +15kgs on carcass weight, have at least +4kgs of milk and then has a negative figure for gestation as we do not want to make the calving interval any longer.

To ensure all is going to plan and that the cows and bull are fertile, James records all serves. After 18 days he watches for repeats, if there are > 35% repeating there is an issue and he will have to investigate. To give the May calving cows a chance at breeding, the bull will be left with the cows until 16th July (13 week breeding season) so that the latest calving date should be 3rd May in 2023. The cows can be scanned from 30 days after the bull is removed (after 15th August), or 30 days after a serve is recorded to check if they are in calf.

As the farm is heavy in nature and growth is slow to start growing in spring, breeding could be delayed until 16th April next year (start calving 1st February) and it could finish on 25th June to give a 10 week breeding season, or on 9th July to give a 12 week breeding season. This would help cows to calve to grass so that they could be turned out sooner after calving, and would also help compact both the breeding and calving seasons on the farm. 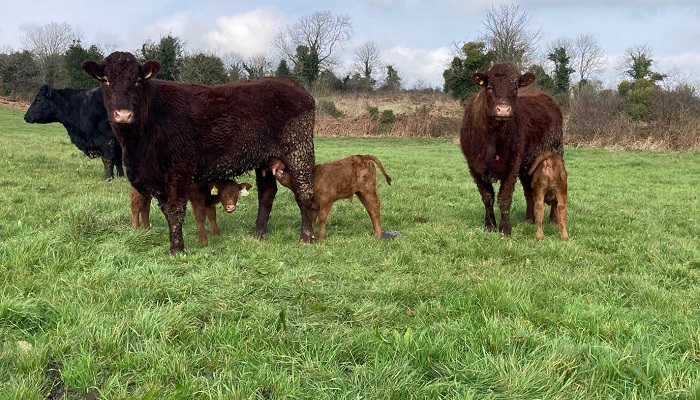 William Kingston along with his son Mark are farming their 33 cow autumn calving suckler to beef enterprise in Drimoleague, Co. Cork. They farm 28.13 ha in two land blocks and began measuring grass on the farm for the first time this year in mid-March. They have been routinely measured since then using a combination of the plate meter and visual assessment to assess grass covers on paddocks and are recording the information through PastureBase Ireland. They have recorded that just under 1.5 tonnes of grass dry matter/ha has been grown on the farm between mid-March  to the end of April this year, ranging from 0.9 to 1.8 t DM/ha in different paddocks.

William and Mark measured grass on the farm on 1st May. There was an average farm cover of 960 kg DM/ha, with a growth rate of 41 kg DM/ha since the previous over on 24th April and a demand of 42 kg DM/ha. There were 23 days of grass ahead on the farm.

The grazing targets at this time of the year are to have an average farm cover of 700-800 kg DM/ha and 12-14 days ahead. Corrective action is advised if the days ahead are over 16 days, so William and Mark will be taking out paddocks for silage in the coming weeks. As the land is quite hilly and stoney in parts, they are limited as to what paddocks can be cut for silage and will have to choose these carefully. As two paddocks on the farm are already closed for silage they can be cut at the same time, which is planned for mid to late May.

The paddock sizes on the farm are about 1ha on average. There are two groups of stock grazing there – the autumn calving cows with heifer calves and the autumn calvers with bull calves. The largest group consists of 3 yearling heifers (~450kg), 18 suckler cows (~700kg) and 18 calves (~300kg). The ideal paddock size for these cattle to get 3 days of grazing at a pre-grazing yield of

1400 kg DM/ha is 0.85ha. William and Mark are very diligent about moving stock along quickly and allocate grass to the grazing groups on a daily basis by using temporary fencing, which amounts to around 4 divisions per paddock. This protects the grass re-growths and allows grass to recover quickly. It also helps the Kingstons to avoid poaching of land during bad weather and keeps fresh grass ahead of the cattle at all times. 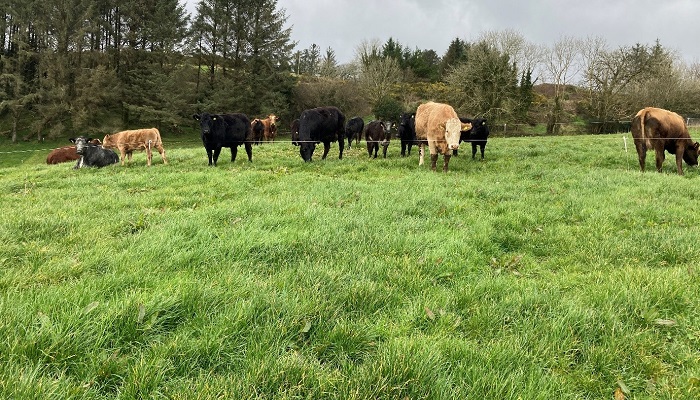 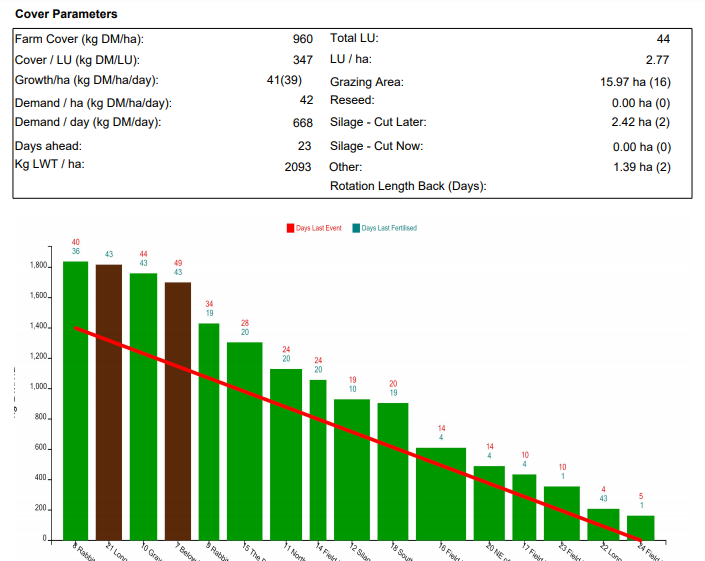 Meanwhile Kay O’Sullivan is running an organic spring calving suckler to store/beef system along with a lowland ewe system in Mourneabbey, Co. Cork. There are currently 25 cows, 11 heifers & 75 ewes on the farm.

As Kay is an organic farmer it is compulsory for her to have an animal health plan. She cannot routinely dose animals for worms and fluke, but instead uses methods like rotational grazing, mixed grazing of cattle and sheep and other methods to reduce the potential worm burden. To assess the effectiveness of these methods, she faecal samples stock on the farm. If these samples show a rise in the worm count above 150 eggs per gram for cattle and 250 eggs per gram in sheep she discusses with her vet what treatment is required. Medicines can only be used on the farm if she can show a requirement and the vet can sign-off the appropriate treatment on the organic certification record book.

Faecal egg samples were taken from the weanlings in January and they came back clear for coccidia, rumen fluke, liver fluke, lung worms, tape worms and stomach worms. They were sampled again in early April and the results came back at 150 eggs per gram of strongyles (stomach worms).

This level indicated a need to treat the cattle and after consultation with her vet, Kay dosed them on 9th April. She used an ivermectin product which was administered by injection and covers lung worms, stomach worms and lice. The typical withdrawal period of this product is 28 days but because Kay is an organic farmer she is legally obliged to double this (56 days). However the meat processor further requires the withdrawal period to be tripled to 84 days.

A faecal egg count reduction test (FECRT) will be carried out on the farm to ensure that the dosing product worked. To do this, Kay will take a further FEC sample from the same treated cattle 14-16 days after dosing to see if the egg burden has reduced. If the burden has reduced by over 95% (i.e. less than 7 eggs per gram) it would indicate that there is no anthelminthic resistance to the ivermectin ingredient (macrocyclic lactone family) on Kay’s farm.

She has also signed up for the Parasite Control TASAH consultation with her veterinary practitioner which is available for the first time in 2022. A farm visit and two faecal egg counts will be funded through the programme. The purpose is to allow farmers and vets to discuss best practices around parasite control with the long view of minimising the further development of anthelmintic resistance. This is a free and voluntary programme supported as part of the Rural Development Plan 2014-2020, co-funded by the Irish government and the EU. Further information is available from Animal Health Ireland at Parasite Control TASAH Consult (Cattle & Sheep) 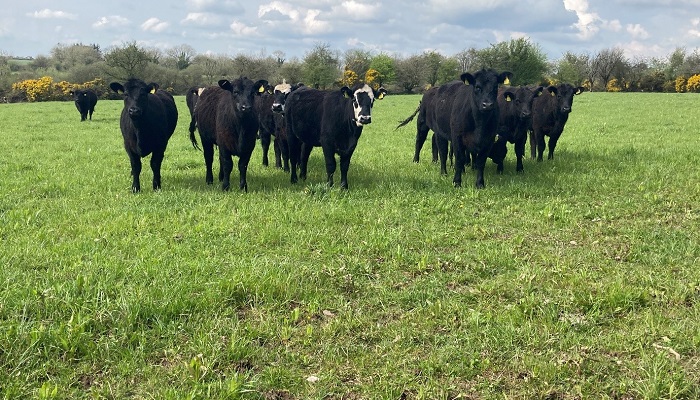 The Teagasc Beef Specialists issue an article on a topic of interest to Suckler and Beef farmers every Wednesday here on Teagasc Daily.  Find more on Teagasc Beef here  Teagasc provides a Local Advisory and Education service to farmers. Find your local Teagasc office here