Newford Farm drafts the first of its Beef Bullocks for 2021


Michael Fagan, Teagasc Technician on the Newford Suckler Demonstration Farm and Jerry O'Brien, Newford Farm give a brief update on the beef bullock sales so far. Paul Nolan, Group Development Manager, Dawn Meats also gives an overview of the carcasses of 9 bullocks and their sale potential.

The first nine bullocks which were finished off grass and meal supplementation. There were 39 2020-born beef bullocks available to be slaughtered on Newford Farm this year. All of the bullocks were sired by 5-star terminal bulls. Fiston, Bivouac, Hideal, and Mullary Intrepid were used on the mature herd, and Ewdenvale Ivor was used on the first calvers.

All of the 39 yearling bullocks were turned out to grass on the 2nd March at an average liveweight of 433 Kgs. The yearlings had achieved an average daily gain of 0.63 Kilograms per day over the winter period.

On the 2nd of September concentrates were introduced at a rate of 2Kg per head to 12 beef bullocks at grass and they were gradually brought up to 5 Kg before slaughter. The bullocks were brought into a concrete yard each day for feeding to prevent paddock poaching. The bullocks liveweight on the 7th September was 622 Kg.

On the 18th of October 9 beef bullocks were drafted for slaughter and their average liveweight was 697 Kgs. These bullocks were 230 days at grass before slaughter and achieved an average daily gain of 1.01Kg or a total of 264 Kg live weight from turnout to slaughter.

On average each bullock consumed 194 Kilograms of a 12 % crude protein ration before slaughter costing €61 per bullock at a cost of €314/t. The 9 in-spec bullocks graded on average U - 3 - with an average carcass weight of 372 Kg with a 53 per cent kill out percentage. 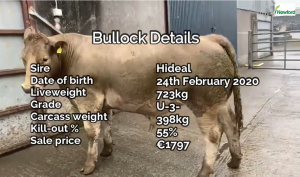 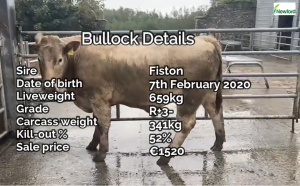 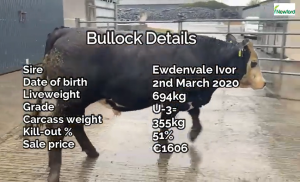 Paul Nolan, Group Development Manager of Dawn Meats has been examining the 9 bullocks carcass and their sale potential. Paul states how they are superb carcasses, all R's and U's, weighing 350/380 kilos which is ideal for their market requirement. The cattle are finished at under 19 months of age which means Newford Farm have lowered their carbon footprint considerably in the last two years. These animals are ideal for the consumers of today as they are going to produce steaks that the consumer wants and can afford.

So the remaining 29 beef bullocks were housed on the 20th of October at 583 Kg live weight. They were started off on 2 Kg of concentrate and this has been increased to 4 Kg for the moment.