There were 46 2019-born, beef bullocks on Newford farm to be slaughtered this year. All of the bullocks were sired by 5-star terminal bulls. Fiston, Gamin and Mullary Intrepid were used on the mature herd and Tow Thorpe Dubai was used on the first calvers. All of the 46 yearling bullocks were turned out to grass on the 22nd March at an average liveweight of 437Kgs. The yearlings had achieved an average daily gain of 0.75 kilograms per day over the winter period.

The first three bullocks were sold off grass on 2nd September. The bullocks, were 19 months of age, and were 164 days at grass before slaughter. The bullocks weighed 675Kgs liveweight and killed out at 55% to deliver a carcase weight of 369Kgs with an average grade of R= and fat cover of 3-. The average sale value was €1,427 per head. For the remaining 43 bullocks, meal feeding at grass started on the 4th of September and continued until they were housed on the 2nd of October. Up until housing the bullocks had consumed on average 136 kilos of concentrates per animal at grass. 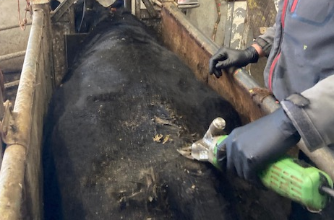 As part of the Newford Farm housing plan and best practice procedures, the backs and tails of bullocks were clipped. The farm has found this routine helps to keep the animal cooler during the winter months when temperatures are higher than normal. It also helps to keep the bullocks cleaner and prevents hide contamination at slaughter time.

Between the 28th of September and the 5th of November, two more groups of 23 bullocks were sold. On the 24th of November, Iarlaith drafted another nine bullocks for slaughter. These bullocks were well-fleshed but at a lighter liveweight as compared to remaining 20 bullocks left in the shed. These 23 bullocks were 621 kg liveweight going up the ramp of the lorry. With a kill-out of 54% the average carcase weight was 332kg. They grade R = 3 -. The average sale price for the bullocks was €1,298. These 23 bullocks received 4.8Kgs concentrates per day for an average of 44 days before slaughter at a cost of €60 per bullock. Their average live weight was 677Kgs at 21 months of age and their average carcase weight was 363Kgs, with an average 54 % kill out per bullock. They graded R=3= with all animals receiving the 20c/Kg QPS in spec bonus. Three received an additional 6c/Kg by merit of grading R+ while one bullock received an additional 12c/Kg. So the average sale price for the 9 bullocks was € 1,453. This batch received meal feeding for 82 days before slaughter and on average consumed 5.3Kgs of concentrates per day along with high-quality 75DMD silage. The concentrates cost €113 per head.

The average daily gain of these bullocks from housing on the 2nd of October to the 24th of November, which is 53 days, was 1.31 Kilograms per day. In total Newford farm has now sold 35 of the 46 bullocks or 76% of 2019-born male progeny. The 35 bullocks average carcase weight is 343Kgs, average sale price is €1,350 per head and the average age at slaughter is 20 months. 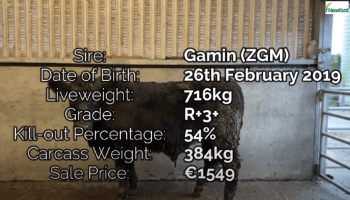 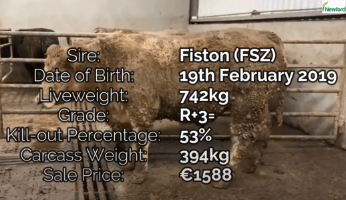 This Fiston-sired bullock was born on the 19th Feb out of an AA cross cow. His liveweight on the sale day was 742Kgs while the carcase weight was 394Kgs with an R+3= grade profile. His kill out percentage was 53 % and his sale price was €1,588. 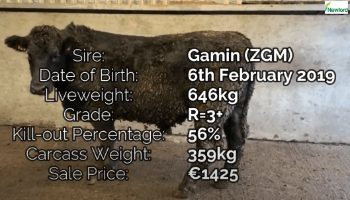 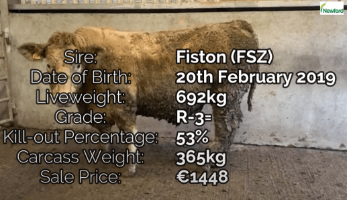 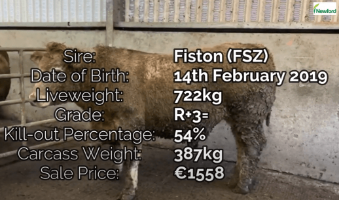 This grey Charolais bullock sired by Fiston was born on 14th Feb out of an AA cross cow. His liveweight on the day of sale was 722Kgs, the carcase weight was 387Kgs and the kill out percentage was 54 %. The bullock graded R + 3 = and sold for €1,558 on the day

There is 11 bullocks remaining on the farm at the moment and nine of these bullocks are receiving 6Kgs of concentrates. The target slaughter date for these animals is 20th of December. We predict these nine bullocks will be roughly 690Kgs live weight leaving the farm for slaughter. The two remaining lighter bullocks will be sold early in the New Year. The bullock’s drafted to-date in Newford farm have all satisfied market requirements. The farm is reasonably pleased with the average carcase weight of 350kg given the average age of slaughter is just 20 months.

The farm is focused on achieving the best balance between outputs and finishing costs and at present there is no benefit in feeding additional concentrates just to hit higher carcase weights. The farm is making the best use of its natural resources – namely grazed grass and this will no doubt add to Newford Farm sustainability credentials. This is important given the growing focus on the carbon footprint of output and reducing greenhouse gas emissions.