Drafting of beef heifers has commenced at Newford. Michael Fagan, Technician of the Newford Suckler Demonstration Farm, Athenry, has details of the 5 finished Fiston heifers. The suckler cows and calves were weighed for BEEP S - see weights here; and get the current grassland situation on-farm

Newford farm tested the waters by drafting the first of its beef heifers on the 6th of August. 5 in-spec heifers were selected (Summary as follows)

At the moment there are 42 heifers being fed concentrates at grass; 3.5 Kgs/day costing 5 cent/Kg and the next draft will be in mid to late September. Troughs have been set up in the yard to prevent paddock damage. 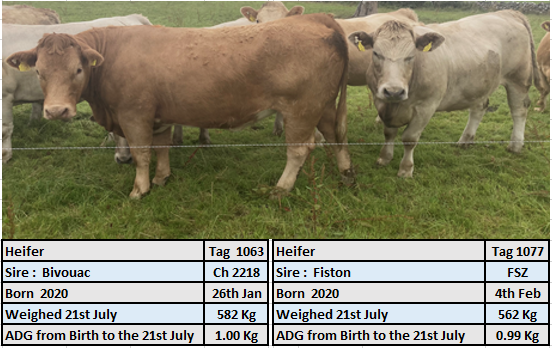 All of Newford suckler calves are thriving well with no health issues to report. All the calves and their mothers were weighed on the 28th of July as part of their BEEP-S scheme.

Meal feeding is fully in progress with all the calves to prepare them for weaning and also part of the BEEP-S scheme. The calves are encouraged to creep graze forward ahead of the cows by simple raising the electric wire in one section of the paddock with two horse PVC plastic posts

* Cover carried out on the 23rd August