Iarlaith Collins, Farm Manager and Michael Fagan, Teagasc Technician to the Newford Suckler Demonstration Farm give an insight into how the farm is preparing for the 2021 calving season. There are 92 cows to calve down this year on the farm and are all in-calf to 5 star terminal bulls.

The 5 star terminal bulls used on the herd include:

The first of the cows is due to calve down on the 7th of February and we are excepting 80% of the herd to be calved down by the 17th of March. At the moment, we are on full alert as the first calf could arrive at any time on the farm from now on. The farm has a full list compiled of the cows due dates based on their AI and scan dates. 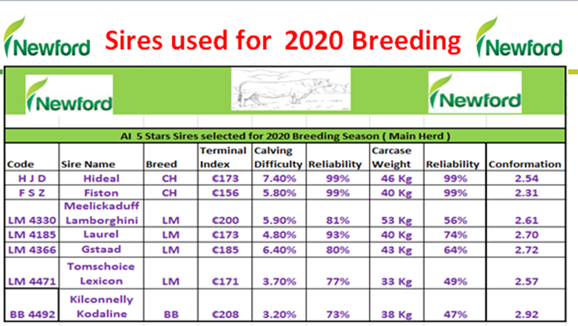 As part of the pre-calving routine, all the cows have been getting 100 grams pre-calving mineral every day since the 1st of December 2020. These minerals are been spread on top of the cow’s silage every morning. Also as part of our pre calving routine all cows were body condition scored in early December 2020. 7 cows were identified with a low body condition and were penned together and receive 2 Kgs of soya hull each day. Over the last 7 weeks, their body condition has improved and feeding of the soya hulls stopped on the 15th January.

One of the main goals for our suckler cow’s in January was to vaccinate all the early calvers with Rotavec. Corona was given to protect against rotavirus, coronavirus and E.coli. This vaccination needs to be given 3 weeks before the first cow is due to calve. The second round of the Rotavec Corona for the later calvers will be administrated on the 15th of February.

As the farm uses 100% A.I. it is possible for us to have an accurate calving date so we can vaccinate according to the AI dates

Iarlaith has been busy during the month of January cleaning, power washing, disinfecting sheds, placing disinfecting foot baths at all sheds entrances  and checking all the calving equipment, so it’s at hand if any of it is required at short notice. Iarlaith has the calving checklist complete well in advance of the pre-calving and developed a shopping list of what the farm might need to have on standby such as spare calving jack ropes, gloves, stomach tube, notebook, Dept. tags, thermometer, navel spray, just to mention a few items. 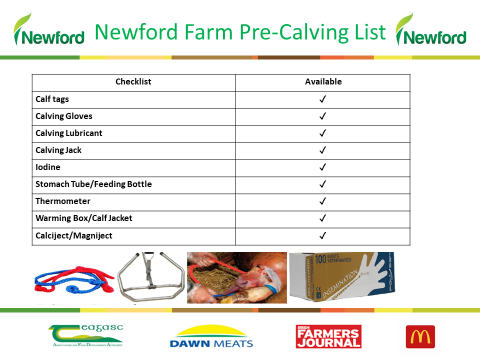 As part of the daily routine to reduce infections a light layer of lime is spread on top of the suckler cows slats. The reason for this is that it will help to reduce the risk of mastitis and it also helps to keep the cows udder and teats cleaner. As the first of the cows begin to show signs of a springing udder on the slats and according to her AI due date, these cows are then taken off the slats and moved to the calving shed where we can house up to 15 cows on straw. There also 9 individual calving pens waiting. The majority of the cows will calf unassisted in the large pen but we have handling facilities in the individual pens should we need them. All cows and calves get a period of 24 hours in the individual pen to allow the cow and calf to bond. It also help us to keep a closer eye on them, and, if there are no further issues, the calf is then tagged and weighted before the cow and calf is moved off to a bigger straw bedded shed.

Lime will also be spread on top of the straw where these calved cows and calves are, the idea behind this is too keep the bedding cleaner and dryer. Which will help to reduce the spread of mastitis and scour infections and weather depending we will aim to get these cows and calves out to grass as soon as possible. We aim to use the paddocks which are the nearest to the yard and has the best shelters for the calves.