Getting management of the suckler cow right in the January to April period will be critical in determining the success of the 2021 breeding season. Most Spring calving suckler cows are either just freshly calved or will calve in the next 8-12 weeks. Aidan Murray Beef Specialist has all the advice

Your management decisions now could well dictate how well your breeding season will progress later in the spring.

Why should I worry about condition?

Simply the condition of the cow at calving will determine her ability to calve down. Too thin and she will struggle to calve, rear the calf and go back in calf on time. Too fat and you are adding to the calving risk and she will be more predisposed to metabolic disorders.

Mind the first calver – First calvers are the future of the herd and should have better genetics than the older cows in the herd in an ideal world. Asking a suckler farmer what age they calve down their heifers can often open up lively debate. Irrespective of age at first calving ICBF work has shown that heifers will need more assistance at calving, typically just over half will need some degree of intervention.

Once calved if turnout is delayed they will need some level of supplementation along with good silage. In Teagasc Grange heifers that typically calve at 2 years old will receive 1.5kg concentrate along with good quality silage ad –lib until turnout. Supplementation after calving has been shown to reduce the level of weight loss in the heifers, improve over feed intake, increase milk yield in the heifers and calf average daily gain. It is essential that they are fed to stop too much loss in condition pre turnout otherwise their ability to come back in heat quickly could be delayed. In a housed situation heifers will often be lower down in the peaking order if mixed with mature cows and if feed space is restricted can lose condition quickly post calving. If you have a big enough first calver group consider penning them together.

There is a temptation in the run up to calving try and restrict cows in an effort to reduce calf birth weight and therefore reduce calving difficult. It is important to understand however that the factors affecting calving difficulty are multifactorial.

Research has shown that you ‘cannot starve calving difficulty out of cows and heifers’. (Table 1 below) The table below shows the outcomes of feeding cows and first calvers varying levels of grass silage or straw plus concentrates pre calving.  If anything over doing any restrictions pre-calving could lead to other problems and severe weight loss pre calving will only further delay rebreeding in the spring. All your efforts should be focussed on having cows in the correct body condition in the 4-6 weeks pre calving. It is also the period to supplement with a good pre-calving mineral that will help improve the cows ability to calve but more importantly will greatly improve calf vigour and viability. 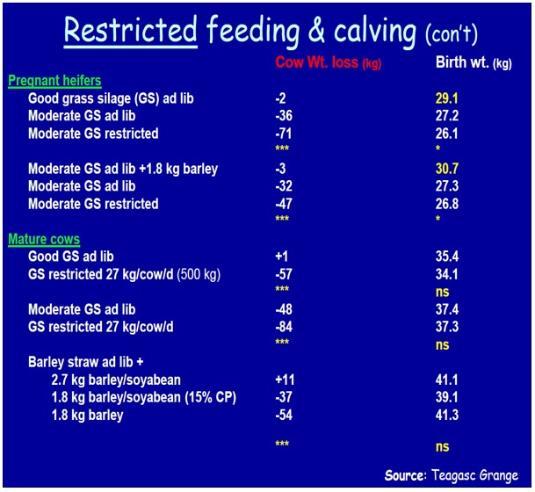 Getting your vet to check out cows that had twins, retained afterbirth or had a difficult calving at least one month pre breeding could pick up on potential problems such as infection which can then be treated. Cows will often be grouped pre breeding anyway if you are vaccinating for the likes of Lepto, BVD, IBR etc.

Don’t forget the bull. For those of you running a stock bull he should not be forgotten for the next few months. May sure they get their vaccines well in advance of the breeding season. If they need their feet paired get it done now as opposed to the week before he goes out to work.

Keep them in good fit condition without overfeeding them. If buying a new young bull get him in 2-3 months before he is needed so that they can become acclimatised and weaned off any heavy concentrate feeding and vaccinated to match what is going on in your herd.

It is hard to believe but what happens in the next few months could well determine the calf crop of 2022!