Drafting cattle for slaughter when they are actually fit to kill is a key management component of successful calf-to-beef systems. At a fat score of 3+, the carcass weight potential of Holstein Friesian steers is maximised. Sean Cummins Teagasc Green Acres Advisor has detailed advice here

Moving too early or too late can result in penalties for cattle either being under or over finished. There is also the cost associated with holding on to finished animals longer than necessary – a factor often overlooked in times of a rising market.

Once cattle reach the desired fat score, their efficiency in terms of average daily gain diminishes significantly. Any decision on holding cattle for longer must be made on the basis of the animal’s performance, the costs associated with keeping the animal and the potential increased return achievable from the market.

Another area that warrants consideration is the actual age of the animals. Where animals are fit and there’s the potential of surpassing the 30-month mark at slaughter, any increase in price or carcass weight may be wiped out through a reduced quality assurance payment and/or additional feed costs.

Moving cattle off grass in Kilkenny

A total of 51 Holstein Friesian steers were slaughtered during the summer months without any concentrate supplementation. An average carcass weight of 326kg was achieved; a fat score of just under 3+ was recorded, while conformation was intermediate of P+ and O- across the group.

Below highlights the performance of four steers slaughtered off the farm during the summer months, with images and weights taken immediately before animals were transported for slaughter, while carcass images were taken in the slaughter plant.

Born on February 1, 2018, steer 10072 weighed 611.5kg prior to slaughter and produced a 293kg carcass. Typical of some of the plainer-type Holstein Friesian steers, the animal was a little light for fat on the rib and loin, while the steer’s tail head was sufficiently covered, which resulted in a fat score of 3-. 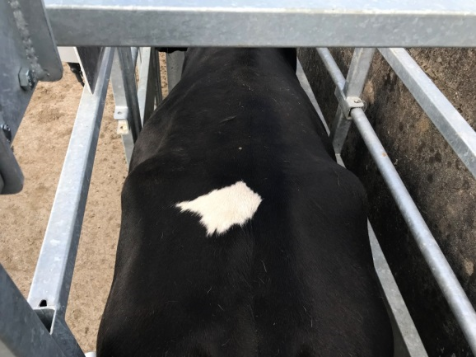 This steer produced a carcass of P+ as a result of being very narrow along the shoulder and being concave in his hind quarter.

Standing at 700kg prior to transport, steer 41106 produced a 362kg carcass (51.7% kill out) and was above target in terms of the Teagasc beef production guidelines for a 28-30 month Holstein Friesian steer. 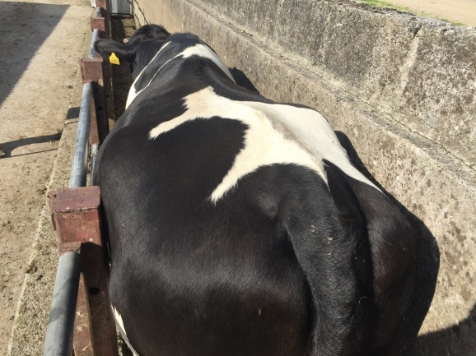 This steer produced a carcass of 3+ for fat – the optimum level for carcass weight performance. A good handful of fat was present over the tail head, while the loin, rib and shoulder were all soft to the touch – an excellent indication that the animal was sufficiently covered for slaughter.

Although still narrow on the shoulder, 41106 had sufficient carcass depth to produce an O- carcass at slaughter.

Focusing on carcass conformation first, steer 60798 was one of the worst animals produced on farm this summer. The steer below produced a P= carcass of 326kg (50.5% kill out).

The relative width of the carcass (both across the shoulder and hips) was a major contributing factor to his poor carcass grade. Unlike some other Holstein-influenced animals, the steer was also lacking height, which resulted in a narrow and shallow carcass upon slaughter. 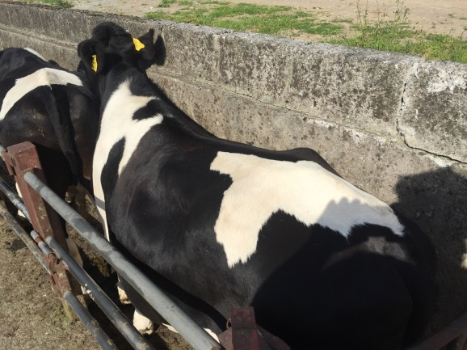 In terms of fat score, 60798 was well finished at 4-. The steer’s rib, loin, shoulder and tail were all ‘warm’ and a good ‘soft’ layer of fat could be felt along these key points prior to slaughter.

Although weighing 700kg prior to slaughter, 70078 was another steer to produce a P+ grade carcass. Again, like 60798, this steer was lacking carcass width and was narrow across both the hips and the shoulder. The width between both the front and hind legs is a good indicator on an animal’s ability to carry meat and, as can be seen from the images below, 70078 was very narrow set.

Despite being of P grade, the steer still produced a heavy carcass of 356kg at a fat score of 3+. A good degree of fatness was evident along the loin and ribs, while the tail head was sufficiently covered.

Bridging the gap on lost performance

Although the O’Hanrahans’ steers graded sufficiently for fat, the group average in terms of carcass weight is running approximately 20-30kg/head behind target.

To correct this, we first must understand where the kilograms of live weight are being lost from the system.

The O’Hanrahans’ farm is very dry, and in most years, it facilitates the early turnout of cattle. As yearlings, these animals were turned out on February 11, 2019; they did not see a shed again until November 6, 2019. Over this period, the Holstein Friesian steers gained 207kg or 0.77kg/day – an underperformance of 0.13kg/day (34.84kg) over the grazing season. This reduced level of gain represents a potential carcass weight loss of 17.42kg at slaughter.

To resolve this issue, a more aggressive approach to grassland management has been taken this grazing season. Previously, there was a tendency to force cattle to graze too heavy of covers and this had a knock-on effect on animal performance. Now, instead of being asked to graze heavier covers, surplus bales are now being taken from the grazing platform in order to maintain pre-grazing yields at optimal levels.

The level of performance recorded over the animals’ final winter was also below target at 0.16kg/day. The target for these animals over the final winter on farm is 0.5kg/day. All-in-all, given the length of time in which these animals were housed, approximately 48kg of live weight gain was lost over the winter months. In carcass terms, this equates to a loss in performance of 24kg.

By making simple changes to the system, there’s potential to improve the quantity of beef sold at farm level. If grassland performance can be maximised and animals can gain these desired weight gains over the final winter, the O’Hanrahans will be in a strong position to maximise the carcass weights achieved from a 28-30 month Holstein Friesian steer system going forward.