The profitability of the dairy beef enterprise depends largely on the quality of calf that is purchased. Alan Dillon, Teagasc Beef Specialist advises purchasing from reliable suppliers, and ensuring to purchase calves that are good weight for age, as this is crucial to limiting calf mortality.

Poor calves lead to poor feed efficiencies, weight gains and thrive, and potentially high mortalities. High mortality within the first four weeks of arrival on the new farm is significantly associated with both the calf supplier and the calf bodyweight on arrival.

Since the commencement of the programme, an increased focus has been placed on the way in which calves are being purchased. An approach where calves are being acquired directly off dairy farms has been implemented – for the most part – by the majority of farms in the programme. This approach is working at farm level and farmers who have made the switch from sourcing calves in marts and through calf agents have noticed significant reductions in disease and illnesses in calves at farm level. Buying the calf directly off farm gives the buyer the opportunity to gain information around the rearing regime of the calves and to greatly reduce the risk of introducing diseases or illness into the herd. However, in some cases, this was not possible, mostly on the farms that purchase autumn calves due to lower availability of calves in larger groups at this time of year. As a result, some farmers sourced their autumn-born calves through agents and calf marts, resulting in sourcing from a higher number of herds than hoped.

The details of each farm are outlined in table 1. Overall, the total number of herds from which calves were sourced from fell by 14, following on from the drop of 47 witnessed last year. 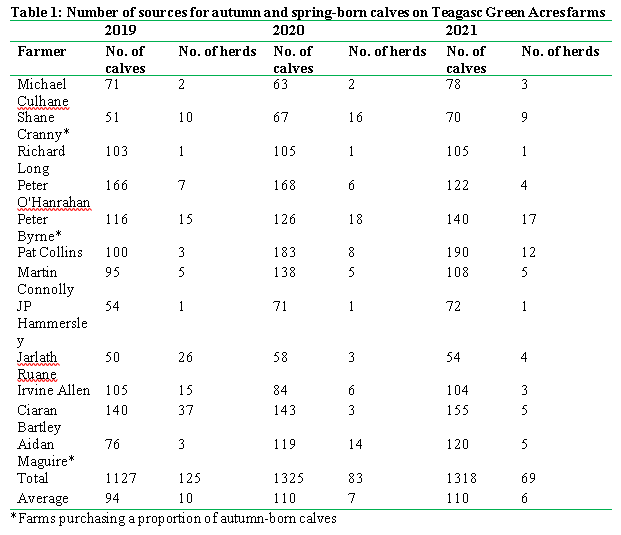 On a number of the farms which had a very large number of source herds, issues arose with pneumonia outbreaks, scour and higher than normal levels of mortality. The effect on profitability was evident in larger vet bills and some stock not hitting target weights. The issues have subsided to a great degree on these farms since the number of source herds reduced.