In recent weeks herds participating in BDGP and in ICBF’s Herdplus have been issued with a 5 Year Trend Report. The report tracks the performance of an individual’s herd on 6 Key Performance Indicators (KPI’s) over the last five years. Aidan Murray Teagasc Beef Specialist, examines two of these here

The ICBF 5 Year Trend Report, as the name suggests, tracks the performance of an individual’s herd on 6 Key Performance Indicators (KPI’s) over the last five years. The herd actual performance is then compared with the national average, and with the top 10% for each KPI.

Some of the KPI’s such as Replacement Index for cows and 1st Calvers have shown a gradual improvement since 2016 with the 1st Calvers showing the biggest improvement increasing from €72 to €87. Six weeks calving rate also improved slightly going from 51% to 53%.     Other KPI’s such as Calving Interval, Calves/Cow/Year and Heifers calved at 22-26 months have bounced around over the last 5 years and progress has been fairly flat. It is noticeable for example how calving interval was lowest in 2016 at 392 days it peaked in 2019 at 402 days and dropped to 395 days in 2020. It is one of those KPI’s that is likely to continue to bounce around at national average level as it is impacted on environmental factors as the drought of 2018 impacted on the 2019 figure.

Two KPI’s however, that I think we can and should look to work on, is Heifers calving at 22-26 months and Six week calving rate. With good management and planning both can be improved.

Heifers calving at 22-26 months is taboo with many farmers while other farmers regularly achieve this. Concerns centre around too small at bulling, too difficult to calf, they won’t calve down again as second calvers or it will stunt them. 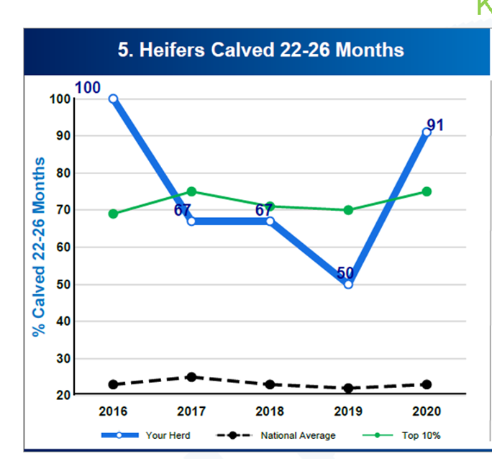 Let us take a look at some of the arguments. Firstly we are not asking people to take a step into the unknown. The blueprints are there in terms of target bulling weights, weight at first calving etc. If you can have heifers at 60% of their mature weight at bulling they are on target. So a mature cow weight of 700kg will need heifers to be around 420kgs at bulling. The notion that calving at 22-26 months will stunt there growth is simple not true. Time and time again at open days and farm walks we have demonstrated heifers that have calved at 2 years old have matured into 700kg plus cows and they are able to calve down again as second, third and fourth calvers.

I do have to concede though that heifers are more troublesome at calving. However that is true of all heifers as ICBF figures have shown. It is not uncommon that over 50% of all heifers calving need some level of assistance at calving irrespective of their age at first calving. But we have a level of control here by having them sufficiently well grown at calving, but more importantly we breed them to the correct bull. We need to use proven easy calving bulls with no greater heifer calving difficulty than 7.5%. We also need to keep heifer condition up after calving particularly if they are housed for a number of weeks before going to grass, so supplementation will be needed.

It is one of those KPI’s that will improve overall costs and will deliver on environmental efficiencies. So if you go out to look at your yearling heifers ask yourself are any of them on target to reach the targeted bulling weight by early May? Should I push them on a bit more while they are housed? or better still how quickly can I get them to grass?. 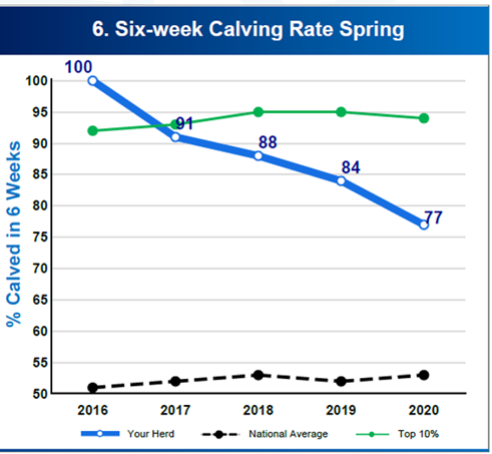 Currently in spring calving herds only 53% of cows are calving in the first 6 weeks, with the top 10% of herds achieving over 90 -95%. It might seem a bit daunting to have a big number of cows calving in such a short space of time but if you have reasonable  facilities it can be done, and bear in mind our average herd size is only around 18 cows. If you are working part time it can often make more sense to do it this way as it will streamline your labour demands around calving and subsequently when it comes to dehorning and dosing stock. For every weanling producer it will mean heavier calves at sale time. Every month earlier that the calf is on the ground before sale time gives you an extra 30-40kgs liveweight to go to the ring with.

If you are interested in improving any of these KPI’s it is well worth having a discussing with your advisor as to the practical steps you should take.