Many of the late September/ early October crops are well established at this stage and attention has now turned to decisions regarding weed control and BYDV control. Shay Phelan, Crops Specialist, takes an in-depth look at post-emergence weed control in winter cereals and crop assessment for aphids.

Drilling of winter cereals has progressed well this year in contrast to 2019. Some growers are finished drilling with the usual exceptions where crops of beet or potatoes have still to be lifted. Many of the late September and early October crops were drilled in almost ideal conditions with most fields rolled, something we could only have dreamed of last year. Indeed these crops are well established at this stage and decisions regarding weed control and BYDV control will now be on growers to do list.

While pre-emergence herbicide applications will generally give best control of a variety of weeds, most growers concentrated on drilling, with the result that the majority of crops have yet to receive a herbicide. The likelihood is that most will receive an application with an insecticide in the coming days or weeks where conditions allow.

Target grass weeds early as the best control will be achieved when they are small. Grass weeds such as annual meadow grass (AMG), bromes etc. are problematic on almost every farm but can be controlled if treated early. Broadleaf weeds (BLW) such as cleavers, groundsel, poppy and fumitory can be difficult to control in the autumn and may need a tidy up in the spring depending on the products used.

Post emergence herbicide applications work best when they are applied early at the 2-3 leaf stage of the crop. You should then assess weeds when spring growth commences. The table below lists the available herbicides options for winter cereals this autumn. 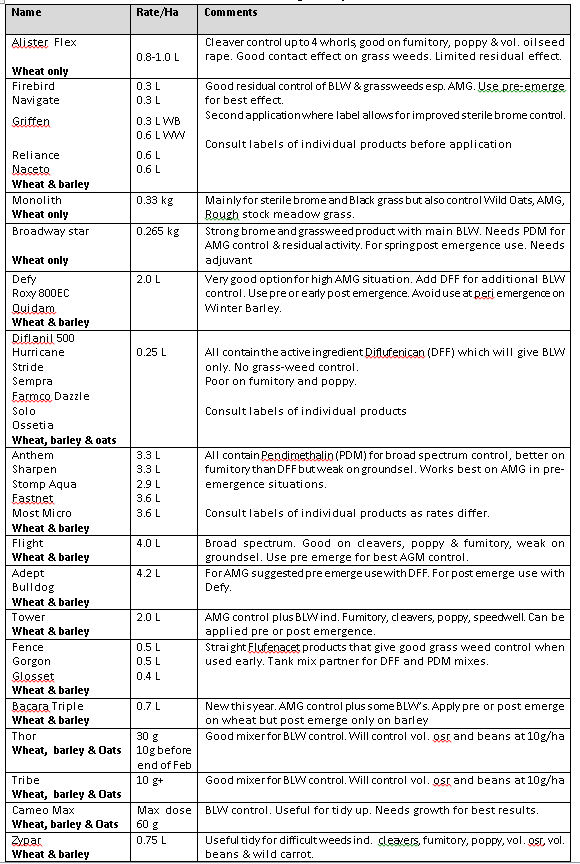 You should always check labels for more specific information and consult your agronomist for options.

There are no herbicide options to control grass weeds in winter oats as the herbicides are limited to broadleaf weed control only.

Reports of blackgrass cases are on the increase in this country, Teagasc are now aware of cases in almost all counties in Ireland that grow cereals and we have seen cases where crops had to be destroyed before the weed set seed in June. Avadex Factor is a new herbicide that is available this year but it must be applied pre emergence for best effect as it only claims to reduce populations rather than control it. With this in mind, we should learn from the UK experience where the reliance on herbicides failed to control the spread of the problem.

Implementation of Integrated Pest Management (IPM), including cultural techniques, is the only sustainable way of getting control of blackgrass. The key IPM solution is fallow or grass ley, but others such as spring cropping, crop rotation, stale seed beds, machinery hygiene etc. all can play a role in controlling the weed.

Many early sown crops will soon need to be assessed for the presence of aphids which may carry Barley Yellow Dwarf Virus (BYDV). The grain aphid is the main carrier but can be difficult to identify. Aphids in general react to temperature and where temperatures are above 8OC they will fly from field to field. Once temperatures drop below 8OC their movement is usually restricted, this temperature drop normally happens in November and so crops emerging then are at a lower risk that those that have emerged in October. The recently launched BYDV Assist App for your mobile phone measures temperature over a period of time and could be a useful tool in determining your risk of aphid movement within crops and subsequently BYDV.

Check crops for aphids, they are usually easier to find on the headlands and if you see them then consider applying a pyrethroid insecticide, this can be included with the herbicide. Early drilled crops, coastal sites and crops in the south are usually at a higher risk than those sown late and in the midlands. However many crops received no insecticide last year as conditions were too wet yet the levels of BYDV in crops was generally very low.

Where you do apply an insecticide check the crop 5-7 days after application to see if there are any aphids present, if you see wingless aphids then you may have a resistance problem, as these didn’t migrate into the crop from somewhere else. If this is the case don’t re-apply a pyrethroid, they will have little effect and will increase the risk of resistance. Flonicamid (Tippekki) which is an active ingredient with a different mode of action may be an option in high risk situations. However research has shown that resistant aphids are more likely to be parasitized by predators, as they don’t have an alarm pheromone and this may help to control populations as well.