Dealing with blackgrass is a challenge and one that no farmer or agronomist should underestimate. Blackgrass, similar to other weeds, can spread in many ways on machinery, in straw, by animals or birds, in seed or mixtures. Crops specialist Shay Phelan has information and advice

One of my first experiences of blackgrass was almost twenty years ago as I was flying into East Midlands airport on my way to the UK Cereals event. Looking down from the plane I could see fields with areas burned off with Roundup as a last ditch attempt to control the dreaded weed. It was easy to spot the other farmers on the plane as they were all pointing and staring at the afflicted fields. A common question was being asked as we got off the plane “how could they let this happen?”.

From talking to many farmers and agronomists in the UK over the intervening years there are many reasons why this problem was allowed to develop to the extent that it did. The key among of them was a lack of information. We don’t have that excuse.

Do not underestimate the challenge

Dealing with blackgrass is a challenge and one that no farmer or agronomist should underestimate. At the start of the Enable Conservation Tillage (ECT) project Teagasc and the project partners organised a blackgrass event to highlight the issue, we had a very small attendance for many different reasons. I suspect mainly it was because people were embarrassed to be seen at such an event. While this attitude has since changed we are still dealing with people who are unaware or in denial that they have the problem.

Are you on top of the problem?

Over the last two to three years I have had many conversations with people about blackgrass. They have told me, in a laid back way, that they have had the problem for say ten years but that they are “on top of it” using herbicides.  My general reply to this is that if you are dealing with it that long then you most definitely are not on top of it.

Indeed we now have confirmed cases in all of the main tillage growing counties in Ireland with one exception so far, which is Wicklow. We are getting new reports of cases all the time, so to say it is only a problem in other parts of the country is simply not true.

Learning from the UK experience

What we have learned from the UK experience is that repeatedly treating blackgrass with the same chemicals year after year in the same crops is a recipe for disaster. As part of the ECT project we have tested numerous populations of blackgrass in Oak Park.We have found that we already have populations of blackgrass in Ireland which are resistant to multiple herbicides. Deciding to grow a crop not knowing if the grass is resistant or developing resistance to a particular herbicide or group of herbicides is like playing Russian roulette. Unless the problem is down to a level where you can hand rogue them and prevent seed return, then the problem is very likely to get worse. 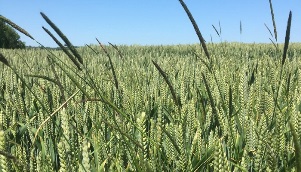 Blackgrass, similar to other weeds, can spread in many ways on machinery, in straw, by animals or birds, in seed or mixtures, indeed we have personal experience of the latter in Oak Park. We found blackgrass in a wild flower mixture. Luckily our farm manager, John Hogan, spotted it in time and we were able to deal with the problem. This will be an ongoing chore over the coming years of monitoring the area to make sure that there are no seed left.

While we often resort to blaming others for the spread of the problem, this is of limited use. We all have a role to play in stopping seed spread. One of the common methods of spreading in the UK was in straw as it was being transported up and down the motorways from farm to farm. The idea of exporting the seed in straw to grassland farms where it would not be a problem fails to recognise the risk of it spreading during transport. Just think of the trail of loose straw on every road and motorway after harvest.

The best way to stop the spread of blackgrass is to confine it to the field or fields where it currently resides. This may mean some unpalatable decisions like burning off crops as they do in the UK. By deciding to harvest a crop with blackgrass in it, you simply cannot eliminate the risk of it spreading in machinery, grain or straw around the country.

There are farmers who have taken the responsible decision to put fields into grass for a number of years as a way to stop the spread, this is the best way of stopping the problem. On farms where this is not an option then every tool should be used to prevent the spread. This involves:

All of these increase costs.

On a recent ECT webinar Conor O’Callaghan from Teagasc calculated that it had cost almost €1,900 per hectare to get on top of the problem in one particular field. To prevent this tillage farmers should walk all their crops before harvest to make sure that they don’t have the problem. If you see something suspicious or a grass you can’t identify simply call your agronomist, they should be able to help you out.

A bigger threat than the new CAP

Travelling the country over the last few weeks it is obvious that we have failed miserably to control many other grass weeds like wild oats in the past, this simply cannot be allowed to happen with blackgrass. There is a lot of talk recently about the threat of the new CAP to tillage farmers, if we treat blackgrass control in the same way as wild oats in the past, then it will present the single biggest threat to tillage farming in this country, not the bureaucrats in Europe. We are lucky to have the benefit of the UK experience, so as I said before we have no excuse.