Complete drilling as soon as possible


For most areas drilling of winter cereal crops has progressed quite well with some growers completed at this stage. In the areas where drilling is not complete the question is when to stop drilling? Crops specilaist Shay Phelan has some advice and guidance on this also BYDV and a recent workshop.

In parts of the northeast and northwest there are still some wheat crops that have yet to be planted.  There are also some potato and beet crops which still have to be lifted with the intention of drilling them afterwards. The question that these growers will have is when to stop drilling?

This can be a difficult question to answer as it depends on location, soil conditions and most of all weather. That said once November comes, drilling crops becomes riskier that would have been the case in October. Research work from Teagasc has shown that while it was possible to get good wheat crops from November drilling, yields tended to be lower than October drilled crops.

Issues such as slugs, crows, waterlogging poorer seed beds and lower germination all can have a higher a bigger impact on crops the later into the season you drill. Many crops drilled in October were rolled which helps to reduce the impact of slugs and birds while it can also increase establishment percentage. Rolling is simply not possible in November so the crops are more at risk of slug and bird damage, in many cases an application of slug pellets will be required. Seed rates will also need to be increased to compensate for the lower establishment rate. Both will increase the cost of growing a crop with lower yield expectation.

So in short coming back to the original question when to stop drilling, as soon as possible would the answer but certainly once the end of the first week of November has passed, then the drill should be put away until spring. 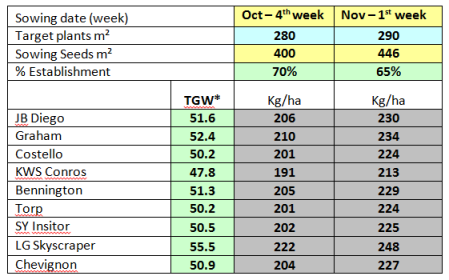 Grain Aphids are the main vectors of Barley Yellow Dwarf Virus which can have a serious impact on crop yield. Trials from Teagasc have shown a 3.7 t/ha yield loss in severe infections. However controlling these aphids is not an exact science.

Firstly, we have to make sure that they are actually in the crop before applying an insecticide, remember insecticides will also have a detrimental effect on other insects, not just aphids so we need to be sure that we are controlling the aphids.

Thirdly aphid movement depends on temperature i.e. > 8OC. If temperatures remain mild as was the case in the autumn of 2018 then aphid flight will be prolonged and you may get aphids entering the crop after an insecticide application. These aphids will not be controlled by an application that was applied weeks earlier.

At a recent field workshop Shay Phelan showed growers and agronomists the effect of different desiccation strategies on a trial crop of Rooster which was desiccated in September. He also carried out trials on another crop of Rooster in August and he compared the results of these two trials.

In summary it could be seen that the earlier that you desiccate the crop with the available desiccants the better the results were, however the crop needs to be already starting to senesce itself to get best effects. This implies that management of the crop throughout the season is an important factor in having the crop ready to desiccate before September.

A video of the results from the workshop is available at;

On this week’s Tillage Edge podcast Michael Hennessy talks to Fiona Doolan, and ASSAP advisor in Teagasc.  Fiona explained ASSAP stands for Agricultural Sustainability Support and Advice Programme which is tasked with working with farmers in a free and confidential advisory service to help improve water quality.

Decreased water quality issues are widespread across Ireland regardless of area or farming system  in that area however the supports behind the programme enable a disentanglement of the source of the problem whether agricultural or non-agricultural.

Fiona told the Tillage Edge that nutrient leaching especially nitrates and phosphorus (as soil sediment) is the main problem in tillage areas.  Fiona and her colleagues have a variety of very practical solutions which can go a long way to mitigating these challenges coming from tillage areas

Listen to the podcast here