The annual sunflower, native to North America, has a long history as a source of medicine, food, oil and dye. Andy Whelton, Teagasc Horticulture Development Unit, explores the growth of this popular annual for sale as a mono bunch cut flower or as a farm feature to a horticultural business.

The annual sunflower, Helianthus annuus, is native to North America and has a long history as a source of medicine, food, oil and dye. We are familiar with it as a popular cut flower where flowering stems can be cut as required and sold in mono cut flower bunches or as an eye-catching centrepiece in mixed bunches.  Sunflowers are a summer grown field crop but also grow well under protection; tunnel grown flowers offer a longer season due to increased protection from wind and rain damage. Sunflowers can be an attractive product offering in a variety of businesses. They can be sold alongside a range of other products and if the potentially long flowering season is exploited the selling season can stretch into the autumn to coincide with pumpkins in the run up to Halloween. The phenomenon of Instagram ‘moments’ with flower fields as a backdrop can be an additional attraction for open farms and mixed Horticultural businesses.

When grown outdoors, a sheltered south facing site is desirable which warms up rapidly in the spring. Sunflowers are deep rooted and will have significant water and nutrient needs although they can be grown in a wide range of soil types

Sunflower planting can be worked into a variety of schedules to suit different marketing models. Sunflowers planted at the end of April are likely to start flowering from mid-July if conditions are favourable or later into early August for larger headed varieties. Successive harvests of flowers can be achieved by new plantings every 7 – 14 days during the spring. Plants sown at the start of April will be ready for harvest in 14-17 weeks depending on cultivar and conditions and will be ready for harvest between mid-August and early September. Crops grown under protection will mature a lot faster.

A wide range of cultivars are available offering different head sizes and growth habits. Cultivars will either produce a single head (grandiflora) or multiple heads on a single plant (multiflora). Flower colours range along a spectrum from bright orange to cream or dark amber.  The main seed supplier for the specialist cut flower species are Takki seeds (www.takiiseed.com), Evanthia (www.evanthia.com)  or Johnny seeds (www.johnnyseeds.com). Proveg seeds (www.provegseeds.com) have been developing the Galilee series which suit the Irish climate.

For the outdoor summer crop most cultivars can be grown in the field between late spring and early winter. Seed can be sown directly into the soil when temperature reach at least 6-8°C. Seed should be sown to a depth of 2-5cm with a greater depth if the soil is dry. The optimum density is on average approximately 10/m2.  A spacing of 20 – 30cm between plants is generally used for standard types but a wider spacing of 50cm and above can be used for larger multi-head cultivars. Higher pant density generally reduce head size. Good seed bed preparation is essential with a fine firm texture.  For larger areas cereal or precision drills can be used (e.g. disk, belt or pneumatic) but accuracy of drilling is essential as the crop will not expand to fill gaps.

For early or late season cut flowers, sunflowers can be grown to maturity in tunnels.  Tunnel-grown flowers will be taller than those in the field meaning that it may be better to choose more compact cultivars. For earlier production, seed can also be sown in modular trays for germination and transplanting from late March onwards.  These should be kept warm if possible (24°C) and will be ready for transplanting after 3 – 4 weeks once the second true leaf has been formed.  Sunflowers can also be pot grown and the restricted rooting volume can reduce cropping times but will require careful feed and irrigation. Sunflowers are not normally supported although some growers find a layer of mesh useful when grown under protection.

The deep rooting nature of sunflowers will provide access to nitrogen from deep in the soil so suitable yields can be achieved from even low nitrogen soils without fertilisation. High soil nitrogen can reduce yield by encouraging vegetative growth so caution is advised. A low level of phosphorus and a relatively high level of potassium will be required to promote flowering. A maintenance application of phosphate and potassium of 40 – 60 kg/ha is recommended to maintain levels.

Very acidic soils (below pH 5.0) will also put the crop at risk of micronutrient deficiencies especially molybdenum, copper and manganese. Boron deficiencies can pose a significant risk on calcareous or sandy soils. It’s always sensible to get a soil analysis done prior to sowing or planting and Teagasc can then provide tailored recommendations.

Weed control after establishment can be difficult due to few approved herbicides for sunflower so an overwinter fallow period before planting can be useful in controlling grass and broadleaf weeds using non-selective herbicides. Weeds are unlikely to create a problem once the crop is established as the broad canopy and tall height will out compete the majority of weeds. However, the crop is very susceptible to weed competition during early establishment from as early as the fourth week post-emergence. Pendimethalin in the form of Stomp Aqua has off label approval and can be used before emergence . Stratus Ultra has an off label approval for grass weeds in the crop prior to stem elongation. Mechanical weed control can also be very effective especially given the wide row spacing that is best for sunflower.

A range of pests and diseases can pose a problem for sunflower. Slugs can be a particular problem in early establishment. In the field crop, larger pests (pigeons & rabbits) can be a problem during establishment and during ripening. While some insect pests may cause minor damage (e.g. tortrix larvae, leaf miners and thrips) these are unlikely to be a significant problem and few control options are available.

Sunflowers are at risk from some disease problems. Botrytis can cause head rot and is common if the crop is grown in damp, cool (15-25°C) conditions and this can discolour the back of the head and spread to the petals. Petal spotting can be an issue, the cause of which is still unclear. The spots or blemishes produced can become brown and necrotic and is serious enough to render stems unsaleable. 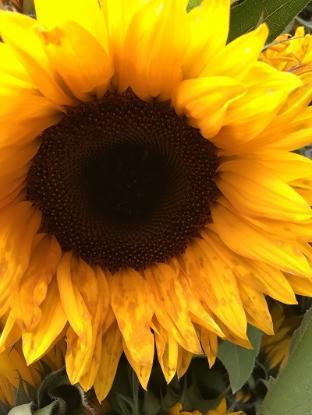 Petal spotting can sometimes be an issue, the cause of which remains unknown.

While sunflowers are more robust than other cut flowers, care must be taken during picking and sale. Additional storage and transport space will be needed and greater labour to handle the crop compared with other crops. Cut stems will need to be put into water as soon as possible after picking to avoid rapid wilting. On a small scale, irrigation shortly before picking can improve shelf life after harvest. Recommended picking stages vary from cutting tight when the ray florets are barely visible to almost completely open. A useful compromise is to pick when the ray florets are between half and fully expanded usually when the petals are perpendicular to the flower head. If picked too tight and stored cool, they may not open properly. Stems with blemishes or spotting on the flower heads are unlikely to be acceptable. Remove all but 3-4 leaves as leaves will reduce shelf life significantly.  Cut stems can be kept for up to a week in a cold store. A shelf life up to two weeks can be achieved by using suitable flower foods such as ‘Chrysal CVBN’(sodium dichloro-s- triazinetrione, hydrated). 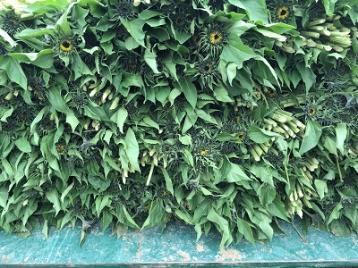 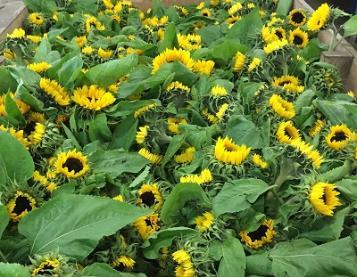 Harvest stage is critical – too tight as on the left and they may not open. Ideal stage on the right.