Vincent Macken mainly grows winter and spring crops. He has completed the winter barley harvest with yields averaging at 9 t/ha at a moisture of 15 %. Quality was generally very good. He also farms collaboratively with a neighbour sharing both machinery and labour. Get his latest farm update here

Vincent farms owned and rented land. He also farms collaboratively with a neighbour sharing both machinery and labour. The main enterprise is winter and spring crops. Price volatility and input costs are their main challenges.

Vincent grows a variety of winter and spring cereals as well as oilseed rape and spring beans. Vincent works a min-till system for establishment and is also using cover crops to trap nutrients and to improve soil structure.

Vincent describes his system in the video below speaking with his Teagasc advisor Shane Kennedy. 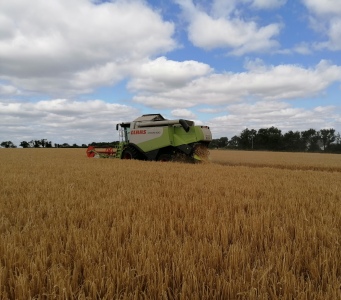 Vincent has completed the winter barley harvest with yields averaging at 9 t/ha at a moisture of 15 %. Quality was generally very good. Winter barley straw is normally baled as Vincent has a good local market so once fields are cleared thoughts will turn to establishing GLAS and non-GLAS catch crops where appropriate. Extra thought will have to be put into species selection this year as oilseed rape is now in the rotation on Vincent’s farm and the risk of club root build-up with brassica cover crops will have to be taken into consideration.

The oilseed rape has been desiccated pre-harvest with glyphosate but Vincent has done some experimentation whereby certain areas of the crop were left untreated particularly the ‘less green’ areas. The first of the oilseed rape was harvested at 10.5 % moisture at the time of writing however the undesiccated areas were still at 12-13 % moisture so Vincent will hold out on harvesting those for now. A similar approach was taken with nitrogen application earlier in the year whereby the first application was made only to thinner parts of the field using liquid nitrogen.

The winter wheat crops are ripening fast with the first wheat after beans looking better than the continuous wheat. Zero nitrogen fertiliser plots were established earlier in the year in both the continuous wheat and first wheat fields and will be analysed pre harvest to try and get to grips with what nitrogen the beans are delivering to the following wheat crop. Also, in the continuous wheat, a three way variety mixture (LG Astronomer, Costello, Graham) was planted to have a look at whether mixtures can provide enhanced septoria control. Alongside this a simple treated vs untreated fungicide demonstration was carried out and differences are clear to see perhaps indicative of the high septoria pressure in the area this season. Wheat straw will be chopped and incorporated in this field to try to enhance soil structure and add organic matter.

Spring beans are looking very well and seem to have benefited from the preceding over winter cover crop of phacelia and tillage radish which was established in August of 2021 after winter barley. They received a two spray programme with the first spray applied at flowering and the second applied three weeks later. Some downy mildew and chocolate spot are present in the crop but the heavy soils are helping to keep it going during the dry spell.

Vincent Macken features as one of three Signpost farmers in the August Teagasc Signpost Programme e-Newsletter | You, A friend or colleague can subscribe to this e-newsletter by clicking the subscribe button below

The Teagasc Signpost Programme e-Newsletter will issue monthly and you can read it here each month on on Teagasc Daily. 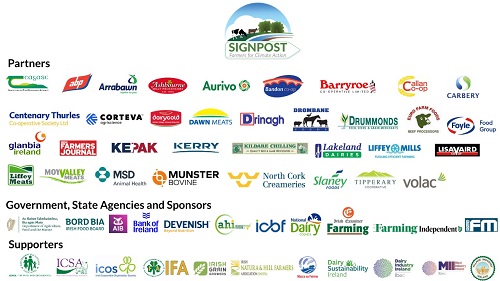 The Signpost Programme is a collaborative partnership of farmers, industry and State Agencies, working together for climate action.