The challenges of herbicide-resistant grass weeds


Grass weeds are a growing problem in tillage fields and herbicide resistance is adding massively to the extent of those challenges, writes Vijaya Bhaskar, Teagasc Researcher. Problem grass weeds such as wild oats, sterile brome, Italian ryegrass and black-grass can cause yield losses of over 80%

Problem grass weeds such as wild oats, sterile brome, Italian ryegrass and black-grass are increasing in tillage fields. They are very competitive and can cause yield losses of over 80% in severely infested cereal fields. If allowed to grow unchecked, they reproduce, explode in numbers, and return an incredible number of seeds to the soil seedbank for future infestations.

Weed control challenges are dealt through herbicide and cultural tools. The ACCase (Group A) and ALS (Group B) herbicides are the most commonly used modes of action for selective grass weed control (Table 1).

There are a number of chemical control options for wheat, but no herbicide options to effectively control sterile brome or black-grass in barley, and virtually no control options for oats. Furthermore, the limited herbicides belonging to the ACCase/ALS groups pose a very high risk for the development of herbicide resistance.

As a part of the ECT programme, grass weed samples were collected from a number of problem fields across the country between 2019 and 2020 for glasshouse resistance testing.

Field populations of seven wild oats (R1 to R7) were collected in Wexford, Kilkenny, and Cork prior to the 2019-harvest. Their response to ACCase herbicides was tested, in comparison with four susceptible populations (S1 to S4).

Plants were sprayed at the 3-4 leaf stage, with rates ranging from 0.25 to 8.0 times the recommended label rates of Axial, Falcon and Stratos Ultra. Herbicide effectiveness was measured by estimating the effective dose rates (ED90) required to kill 90% of the treated plants.

For Axial, the recommended label rate of 30 g/ha did not kill 90% of the plants in populations R1 to R5 and R7. Instead, 1.2 to 3 times the recommended rate was required to achieve that level of kill. This conformed that these six populations are pinoxaden-resistant (Figure 1A).

Similarly, for Falcon, the effective dose rates required to kill 90% of the plants in all seven populations ranged between 2.5 and > 8.0 times the recommended rate of 100 g/ha (Figure 1B).

For Stratos Ultra, the effective dose rates causing 90% mortality was about 1.5 to 2.6 times the recommended rates of 150 g/ha in populations R2, R3, R4 and R7 (Figure 1C). While population R5 was extremely cycloxydim-resistant.

Overall, the resistance pattern profile indicates R2, R3, R4, R5 and R7 were resistant to all three ACCase actives, R1 was cross-resistant to Axial and Falcon, and R6 was resistant to Falcon only. Different cross-resistance within a single field (for populations R1 to R5 and R7) limits the options of changing or alternating actives belonging to the ACCase group.

For R6, adequate control may initially be achieved by using ACCase-Axial or Stratos Ultra. Nevertheless, ALS-Pacifica Plus at recommended rate was found to be highly effective on all seven ACCase-resistant populations, when used at the correct plant growth stage.

Furthermore, of 78 field populations of wild oats screened to date, ACCase resistance was identified in 10 populations, while there was no evidence of ALS resistance (Pacifica Plus or Broadway Star). However, growers must note that ALS resistance has already been reported in spring-germinating wild oats in other countries. 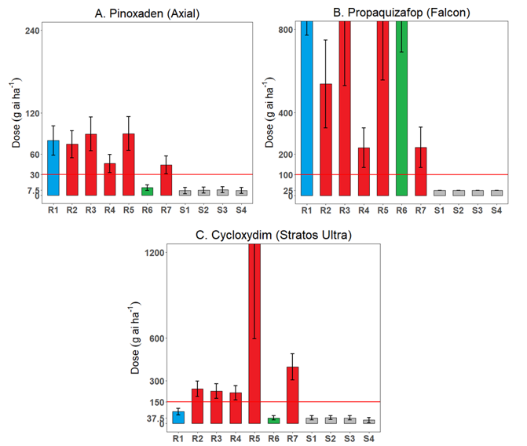 Figure 1: Estimation of effective dose rates required to kill 90 % of the treated plants for resistant (R1 to R7) and susceptible (S1 to S4) populations of wild oats to each of the three ACCase herbicides pinoxaden (A), propaquizafop (B) and cycloxydim (C). Vertical bars indicate standard errors. Recommended label rates of pinoxaden (30 g/ha), propaquizafop (100 g/ha) and cycloxydim (150 g/ha) is represented by the horizontal red line.

Seeds from 18 field populations of sterile brome were collected in 2020. Plants were sprayed (2-3 leaf stage) with half or full recommended label rates of ALS/ACCase herbicides.

With the ACCase-Stratos Ultra, some populations (28%) recorded a lower level of tolerance, with survival from half rate dose varying from 4% to 26%.

These results confirm early stages of resistance evolution within and among sterile brome populations, which may be hastened by the repeated use of reduced rates. However, ALS-Broadway Star and ACCase-Falcon (both half and full rates), and Stratos Ultra (only full rates) were found to be highly effective on all ALS/ACCase-tolerant populations when used at the correct growth stage.

From a total of 35 populations screened to date, no full herbicide-resistant sterile brome has been confirmed. However, there is a high likelihood that tolerance to ALS-Pacifica Plus may be widespread, which might reduce product efficacy and seems likely to get worse in time.

The introduction of herbicide-resistant black-grass in recent years is likely to pose a significant challenge. But some native populations may also carry a degree of resistance if they were regularly treated with herbicides that are active against black-grass.

Samples from 12 black-grass field populations were collected in 2020. Plants were sprayed (2-3 leaf stage) with ACCase-Falcon and Stratos Ultra, as well as ALS-Pacifica Plus and Monolith at recommended label rates.

Only some of these populations showed resistance. One population (R1) from Cork survived the ACCase treatments only, while three populations (R2 to R4) from Dublin, Meath, and Waterford survived all ALS/ACCase.

To quantify the levels of resistance in these four populations, dose-response experiments were carried out to each of the ACCase/ALS herbicides.

Symptoms of resistant (R1 to R4) and susceptible (S2) populations of black-grass, with dose rates from 0.25 to 8 times the recommended rate of ACCase-Falcon and Stratos Ultra and ALS-Pacifica Plus and Monolith are shown in Figure 2.

For population R1, adequate control may initially be achieved using ALS-Pacifica or Monolith. However, for multiple-resistant populations R2, R3 and R4, no chemical control options are available in any tillage crop and the clear recommendation would be to put it down to grass for a minimum of five years to help eliminate the seedbank. 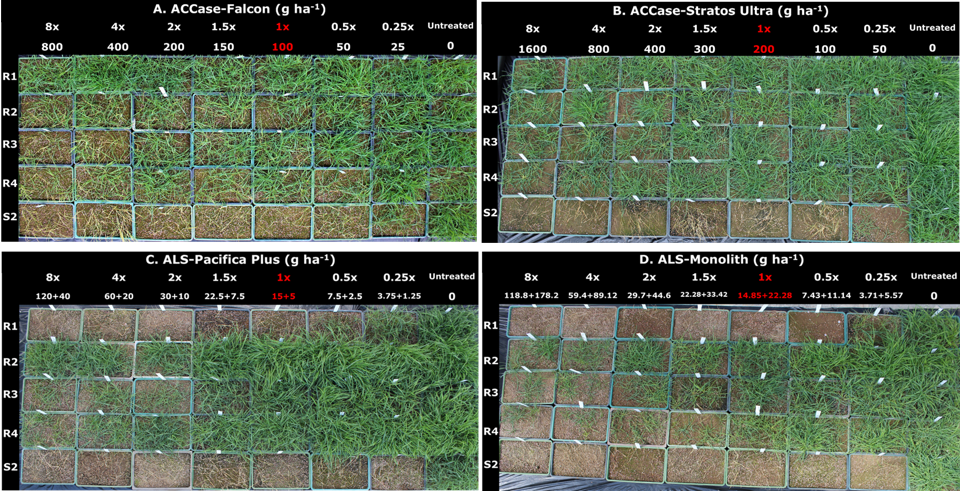 Italian ryegrass is not a major weed in winter cereals but infestations in cereals are an issue in places and some growers are experiencing control difficulties.

Field populations of four Italian ryegrass were collected in 2020. Plants were sprayed (2-3 leaf stage) with ACCase-Stratos Ultra, Falcon and Axial Pro and ALS-Monolith, Broadway Star and Pacifica Plus at recommended rates.

Herbicides from the same group can behave differently in the same field because:

Studies indicate that most cases of weed resistance occurred in situations where herbicides with the same mode of action have been used repeatedly in the same field. Also, earlier sowing of winter cereals, non-inversion tillage and use of rates lower than recommended rates have contributed.

However, there are solutions within every grower’s reach, with the adoption of integrated weed management (IWM) to help manage both resistant weeds and minimise further resistance development. These include:

Where resistance is present, you must consider your best options for autumn versus spring grass weeds and use this to guide on whether to plant autumn or spring crops in a specific fields.

Watch the videos as Vijaya Bhaskar talks about...

Effect of herbicide rate on Black-grass here below: