This weeks update has information on the likely impact of the drought. There are also updates from specialist Mark Plunkett on winter crops, spring crops, spring beans, beet and maize.

Listen to the latest episode of the Tillage Edge Podcast where Francis Bligh, Teagasc Health & Safety Specialist discusses machinery safety for young drivers and also other safety areas around the farmyard.

Rainfall over the last number of days and forecasted rain is very welcomed to ease the drought conditions country wide and reduce the large soil moisture deficits. This rainfall will be very important for many crops to reduce the drought impacts to some degree. It will help sustain plant growth by keeping plant root systems functioning for crops that are not severely drought impacted.

A recent report estimate the output from the cereal sector in Ireland is expected to reduce by at least €100 million this year following the effects of the prolonged drought which has severely affected crops in the eastern half of the country. Total output of grain this year is expected to drop from the normal 2.3 million tonnes to under 1.9 million tonnes. Straw yields are also predicted to reduce by close to 25% of normal quantities with an estimated 1.6 million less bales available in the country this year.

Winter wheat crops are in full flower currently and broken weather will increase the risk of ear blight. It will be important to treat crops with a suitable fungicide for ear blight control if not already treated, products include Prosaro, Gleam or Magnellow. Septoria levels are relatively low in the majority of varieties but forecast rainfall may increase pressure in crops. 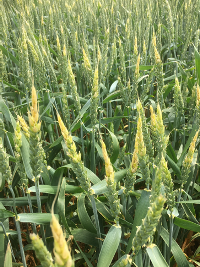 Spring crops are from ear emergence to grain fill.  The dry conditions are now becoming very evident in many fields.  For example on lighter / drier parts of fields crops are shorter with reduced plant counts and reduced yield potential. See picture on the left showing drought damage on a crop of spring wheat where plants are stunted with the tip of the ear is bleached / blind grain sites.  At this stage the majority of spring barley crops may have received a final fungicide depending on yield potential and drought impact as disease levels are very low and absent to date in many crops. Spring wheat crops are flowering and with the current broken weather ear blight is a risk.  These crops should be treated with a suitable fungicide to control ear blight if not already applied.  Spring oats crops are at the heading stage and will require a final fungicide to control rusts.

Spring bean crops to date look good with good plant stands and seem to be tolerating the dry conditions compared to other crops. The recent rain will help these crops as crops are going through a very important stage at present – Flowering / yield development.  There are reports of low levels of disease at present but crops should be monitored on a regular basis and treated at the first signs of disease in the crop.

Crops of fodder beet are tolerating the dry conditions quite well with good development over the last number of weeks. Some crops will have full canopies (meeting in the row) by the 21st June which would indicate that crops are on track in terms of growth and development.  Watch crops for minor nutrient deficiencies such as Manganese / Magnesium over the coming weeks.

Maize crops again are performing quite well in the south east despite the very dry soil conditions. Recent rain coupled with good soil temperatures at present will further drive plant growth and development over the coming weeks.

Francis Bligh, Teagasc Health and Safety Specialist joined Michael Hennessy on this week’s Tillage Edge podcast to discuss machinery safety for young drivers and also other safety areas around the farmyard. Francis told the Tillage Edge there was no change in legislation regarding young drivers operating larger and faster tractors. Francis also touched on other areas where farmers can improve their practice such as workshops. Listen in here The Tillage Edge Podcast

This EU research programme is looking at a number of bio based organic fertilisers and their role in supplying valuable N, P, K & S for tillage crops.  This trial is being conducted on Sylvester Bourke’s farm, Arklow Co. Wicklow. Find out more in the below video.