Mark Plunkett, Soil & Plant Nutrition Specialist reports from a number of tillage fields with Martin Bourke, Tillage Advisor, Wicklow. A lot of progress has been made over the last number of days & weeks with the planting and establishment of winter cereal crops

Autumn is very much upon as the leaves turn from yellow to golden brown and the autumn winds and rains blow them from the trees.  Significant rain has fall over the last 2 days (Monday & Tuesday) which will have halted the planting of winter cereals across the country. Winter barley planting will be near complete at this stage with areas of winter wheat and oats remaining.  Increase seeding rates to take account of seedbed conditions and time of sowing.

In the Fields Crop Update

Oil seed rape crops are developing well with good establishment in both early and late sown crops. Good control of weeds have been achieved in many early sown crops, some crops will require volunteer cereal control. Watch crops for phoma disease (stem canker) development over coming days/weeks.  The benefits of applying N, P & K is very evident in later sown crops of OSR. See picture below showing with and without N, P & K at sowing time (fig. 1).

Winter cereal crops range from just sown to crops at the 1 leaf stage.  Early sown crop have one fully emerge leaf at this stage with good plant establishment in both barley and wheat.  Min-tilled winter barley crops following spring barley are now showing the presence of volunteer spring barley plants (fig. 2).  Monitor these crops over the coming weeks for pests and diseases.  There is a nice flush of weeds (chickweed) appearing in many crops and will require treatment over the coming weeks. 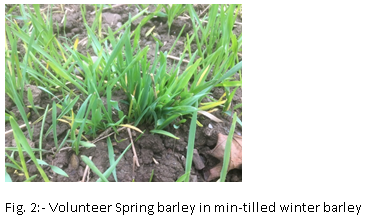 Watch crops over the coming days & weeks as the weather is turning colder and wetter.  This will help reduce the activity of aphids and BYDV transfer but also increases the risk of slug activity on emerging crops, especially in cloddy seedbeds. Monitor crops for slug activity by placing some slug traps in emerged crops.  Make slug traps with a 0.5m x 0.5m piece of plywood and place some breakfast cereal underneath as slug bait. Where there are more than 5 slugs found in a trap, treat crops.

Crops planted in the last 7 to 10 days are emerging quite rapidly and should be emerged over the coming days. Pay particular attention to emerging crops after oil seed rape crops as the risk of slug damage tends to be higher. Where seedbeds are not rolled and are cloddy will increase the risk of slug attack under the current moist soil conditions.

(There is no Tillage Edge podcast this week)