Shay Phelan, Teagasc Crops Specialist brings us this week's Tillage update on winter crops of barley, wheat and oats. He also has the latest details on sowing spring crops here. Plus a chance to catch the latest Tillage Edge podcast: A Farming View from Poland

Growth in winter barley has increased in the last few days despite cool temperatures. Most crops are approaching GS 32 with earlier developing varieties like KWS Joyau approaching flag leaf. The recent dry weather has slowed disease that was in crops a few weeks ago and most crops are relatively clean. Fertiliser is largely complete but frosty nights has delayed plant growth regulator and fungicide applications.

Some crops recieved a fungicide (targeting Rhynchosporium) at late tillering and are now on a three spray programme. The majority of crops have only recently had a fungicide application so will be on a two spray strategy. Recent dry weather in combination with a recently applied fungicide should keep the main foliar disease at bay.

Wheat crops are starting to move through the growth stages now despite the cold temperatures last week, most crops are at GS 31 and are in need of growth regulators and the main split of nitrogen. Disease levels vary with yellow rust prone varieties still showing signs of infection, septoria is evident in all crops at various levels.

Crops are in stem extension and so will require a PGR in the coming week with other jobs like wild oat control also needed in the coming weeks. The addition of a leaf 4 fungicide will depend on whether or not yellow rust is present, for prone varieties control is warranted however in varieties that are not susceptible such as Costello or KWS Conros then no fungicide is needed. 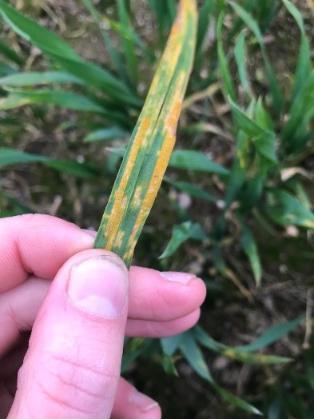 Winter oats have grown considerably over the past 10 days despite the cool conditions.  Crops are generally looking well and growth stages range from GS30-GS32.  Disease levels have reduced again due to the cool conditions with little disease on the new growth in most crops.  There are still a small number of crops where mildew is a problem.

Many crops are now approaching growth stage 32 which is the best timing for a plant growth regulator, apply a suitable fungicide as well to control mildew and or crown rust.

Practically all spring cereals crops are planted with the exception of the north-west where persistent wet weather has delayed drilling. Spring barley crops have emerged relatively well and many have already received their full allocation of nitrogen. For most spring cereal crops the next job will be weed control, there are plenty of options for each crop with most crops receiving a mixture of an SU product e.g. Cameo Max etc. and a mixer product e.g. Galaxy. Teagasc trials have shown that where you get a few days of good growth before applying a herbicide, control is improved even at reduced rates.

The Tillage Edge podcast is joined by Tim Bergin, a Dubliner, who is farming in Poland close to the Baltic sea.  Tim started farming in Poland in 2002 and is now farming close to 1,200 ha of sandy loam soils.  The total rainfall in the area is similar to Ireland but its drier than he would like in April and May.

Tim grows a mix of winter wheat, oilseed rape and potatoes as his main crops on the farm.  Farm yields of potatoes and oilseed rape are similar or higher than Ireland and winter wheats are lower yielding, at 8t/ha, but this is milling quality. Potatoes mostly grown for processing making chips for McDonalds (variety Russet Burbank) and Tim would like to start growing more seed as it’s a good area for high quality production.

Tim runs a min-till system with four full time staff and maintains his machinery outlay is smaller than a similar farm in Ireland however he still thinks the costs are too high.  The Tillage Edge will get an update from Tim later in the year to see how farming is going in his area.

Catch up with this episode here

For more episodes and information from the Tillage Edge podcast go to: www.teagasc.ie/thetillageedge