Mark Plunkett, Soil & Plant Nutrition Specialist reports on tillage crops and how they are developing in the southeast. To date June has been a relatively good month with large increases in day & night time temperatures with good levels of sunshine.

This has favoured crop growth and development especially for crops of spring barley with many crops developing rapidly in the last 7 to 10 days.

In the Fields Crop Update:

Spring barley crops have developed very rapidly over the last 7 to 10 days with many crops now at or approaching the correct stage for the final fungicide application (T2).  The correct time for the final fungicide is when crops are at awns emerging (GS 49).  A recent trials at Oak Park showed that this was the most effective timing for effective disease control of major diseases such as ramularia.  Assess crops for diseases such as Net Blotch, Rhyncosporium, Ramularia & Powdery Mildew and apply a suitable fungicide programme.  Diseases such as net blotch for example are very dependent on the variety type and weather conditions currently and over the next month.  While diseases such as Ramularia, levels very much are linked to crop stress factors such as cold / wet weather / poor soil structure or anything event that may stress the crop.  In 2021 spring barley crops have encountered much stress for example the cold and wet weather in the month of May where we exceeded national monthly rainfall amounts.  Therefore, inspect crops for diseases present and select suitable fungicides to protect crops for the remainder of the season.  Include a multi-site fungicide to give activity on ramularia with an azole based product such as prothioconazole (Proline).

Winter wheat crops have developed well over the recent weeks and again the improvements in temperatures and sunshine levels favoured the development of the crop.  Many crops are now at ear emergence (GS59) to flowering (GS65) for the crops that I visited.  Crops have remained relatively clean on my travels mainly due to the variety type and well timed fungicide programmes.  There are many reports of yellow rust re-appearing again in susceptible varieties currently.  It is important to assess crops for diseases at present and select suitable fungicides to control major diseases over the coming weeks.  The aim with the final ear spray is protect crops from major yield robbing diseases such as fusarium which can be a problem if wet weather is encountered during flowering.  Select fungicides to give effective control of septoria, rusts and ear blight (fusarium). See main image above: Winter wheat at ear fully emerged (GS59) ideal timing for ear spray.

Spring Beans are developing quite well and again the sunshine and heat in combination with damp soil conditions have resulted in good growth over the last few weeks.  Crops that I visited were flowering and with no signs of disease present such as chocolate spot.

Aim to treat crops with a fungicide and continue to monitor crops for chocolate spot and downy mildew as diseases can develop rapidly especially under warm humid conditions. 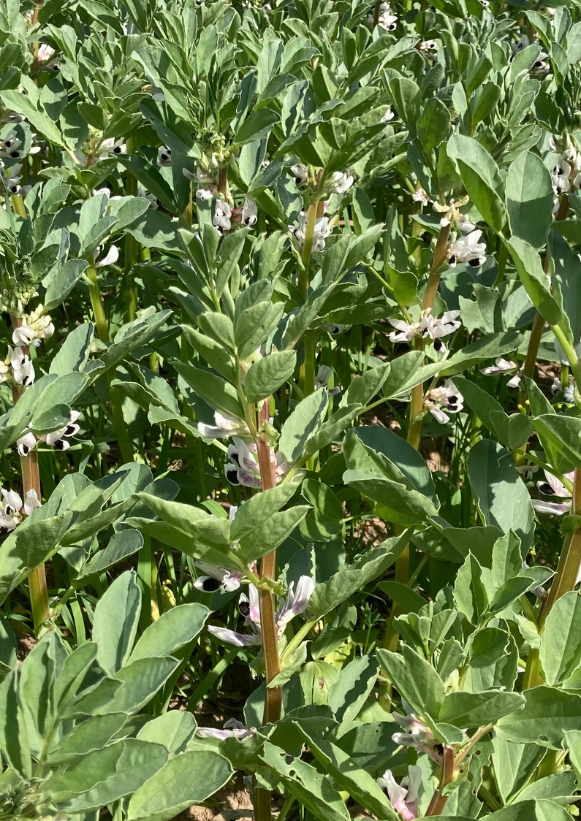 Andy Mahon, the Dubliner who is a farm manager in the east of the England re-joins Michael Hennessy on this week’s episode of the Tillage Edge with an update on his year so far.

Andy started planting a little later than normal in early April however the wet spring forced Andy to reflect and perhaps ponder whether he should have using a tined machine would have been a little better as it would have allowed more drainage compared to the disc (Horizon) drill which was used.  Crops on Andy’s farm are looking well with good yield potential.  This reflects an overall trend in the east of England and Andy thinks there is excellent potential in the winter crops in particular.:

Check out the latest Tillage Edge podcast below