Shay Phelan, Teagasc Crops Specialist provides this weeks Tillage Update, in which he discusses the latest agronomy issues for Winter Barley and Winter Wheat. He has specific advice on Yellow Rust in Winter Wheat and emphasises prioritising the sowing of spring crops of beans, oats and wheat now

Nitrogen Application: Most crops have received their first application of fertiliser already with many growers now getting ready to apply the main split of nitrogen in the coming week. This application is typically in the region of 100Kg/ha of N depending on the total amount allowed on the crop. Remember the total amount of chemical nitrogen allowed on a winter barley crop in Index 1 is 180 Kg/ha, this maximum is based on a grain yield of 8.5 tonnes per hectare, however if you can prove yields in excess of this in the three previous years then you can apply an extra 20kg/ha of nitrogen for every 1 t/ha of yield above the reference. This week's episode of the Tillage Edge podcast has more on Maximising your Nitrogen application on farm. You can catch up with it at the bottom of this page.

Growth regulator application: Crops are coming to the end of tillering and are starting stem extension phase i.e. growth stage 30 which is around the time when growers start to put on their first growth regulator. Ideally this should be timed at GS 30/31 so there is still of plenty time. Options include Moddus/Meddax Max + CCC, Ceraide or K2.

Disease control: Watch out for disease on crops there are reports of rynchosporium on some crops Cassia is most prone but KWS Jayou, Pixel and LG Casting also has some infection. Where visible apply an appropriate fungicide to control it.

Be careful with tanks mixes that may include pgr’s, trace elements, wild oat herbicides and fungicides, we have seen in previous years that complicated tank mixes can stress crops so where multiple jobs have to be completed it is better to split the applications.

Fertiliser Application: Over the coming days and week apply the first application of fertiliser which will be in the form of an N,P & K compound, match the quantities to the most recent soil test result. Where soil test results indicate that P & K indices are below index 3 allow for some build up. In the video attached Mark Plunkett describes the P & K Requirements for Winter Cereal Crops

There are many reports of yellow rust infection in certain varieties around the country (See Photo 1). Bennington is most problematic followed by JB Diego, Torp and Graham. Yellow rust is a disease that has the capacity to strip the leaf and kill it, however the decision to treat the crop and the product choice depends on a number of different criteria. A strobilurin e.g. Comet is best used in a preventative or low pressure situation, this should keep the disease under control until the leaf 3 application. Where the disease pressure is high in Bennington, for example, especially if it is late sown and still tillering or it visible on new growth, then there may well be no option other than to use an Azole such as tebuconazole or epoxiconazole (If available) but be aware that using an Azole at this timing will affect efficacy of some azoles for septoria control later in the season. As always monitor crops and use IPM strategies rather than prophylactic use of fungicides. 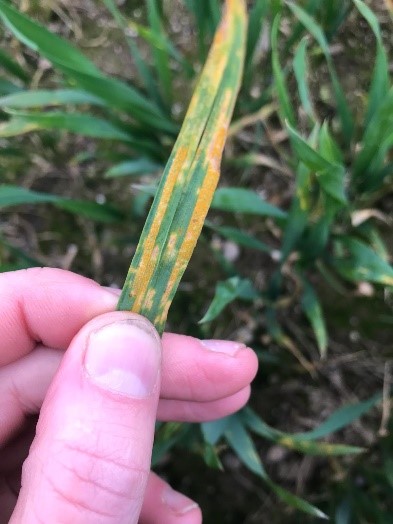 Photo 1. Yellow rust on a leaf

At this stage priority should be given beans, oats and wheat as these need to be sown before the end of March. Spring barley can easily be sown in April and still yield well and be harvested in August. Sow into good dry seed beds and roll afterwards. In the case of beans apply you herbicide after rolling for best effect.

Seed rates: Pay attention to seed rates especially as the thousand grain weights can vary from variety to variety so one setting on the drill is unlikely to deliver optimum seed rates. At the recent Teagasc Crop Webinar Shane Kennedy described how to calculate seed rate for spring barley and how important it is to get this correct. Click on the link here to view the video  Shane Kennedy Teagasc, on Spring Barley seed rates

For more on Teagasc Tillage Crop webinars check out https://www.teagasc.ie/tillagemonth/

This week's episode of the Tillage Edge podcast has more on Maximising your Nitrogen application on farm. Getting the best out of every kilogram of nitrogen applied on farm is not only desirable but necessary from a financial and environmental perspective and Dr Richie Hackett from Oak Park, Teagasc joins Michael Hennessy on this week’s Tillage Edge podcast to explain more.   Check it out here below: