Establishing a relationship based on trust and a good contract will benefit both owner and calf rearer. This is the advice of Gordon Peppard, Teagasc Collaborative Farming Specialist speaking about Contract rearing male calves.

Farming near Enniscrone, Co Sligo, Peter Gilmartin traditionally sold steers and heifers from his suckler herd as yearlings. “In spring 2020, we decided to start contract rearing male calves from dairy herds,” says Peter. “We reduced the suckler herd and sourced 50 male calves from dairy farms in Munster. The three-week -old calves were split evenly between Continental, Friesian and Jersey cross animals and weighed on average 50kg on arrival at Peter’s farm. Having received their initial electrolytes and allowed a settling in period, all calves were reared on milk replacer, concentrates and roughage until weaning at about nine to 10 weeks. By then, they weighed 85kg and were eating a minimum of 1kg of concentrate per day. “During their first season at grass, the calves received 2kg of concentrates for the first three weeks,” says Peter. “Having had a suckler system, the one area where we noticed a big change was the need to dose the dairy-bred animals more often, as they grazed hard, picking up parasites due to not having a cow to suckle.”

The male calves were castrated during the summer months, following the correct veterinary procedures. Following the winter housing period, where the steers received highquality silage and an average 1kg of concentrate, they returned to grass as early as possible this spring to maximise growth from high-quality early grass. “As part of the contract agreement, I am paid a set rate for the calf rearing period and then a flat rate for the remaining time on the farm,” says Peter. The initial plan was that the male animals were to remain on-farm until 15 April 2021, when the owner had to either organise sale to a third party to Peter or agree a further rearing period. As an incentive to maximise performance, an additional bonus payment was agreed on any weight achieved above a set target. “In contrast to selling yearlings on one sale date per year, I now have a regular income and cash flow, so forward planning is much simpler,” says Peter. “There is no exposure to a volatile beef market or price and as a self-employed worker, the male animals work very well from an ease of management point of view, there is no heat detection, AI, etc, as would be involved with rearing of females.” Peter concludes by saying he was delighted with his first year in his new enterprise and a new batch of 2021 male calves have arrived. 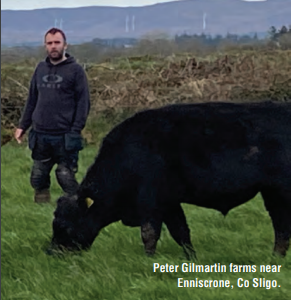 In general, contract calf rearing involves the movement of male calves and any heifer calves that are not required to be kept as dairy replacements from the owner’s farm to another farm for rearing under a contract agreement. The animals remain in the ownership of the dairy farmer and an agreed fee per head per day is paid to the contract rearer. These calves are reared from any age greater than ten days, the point at which they are permitted to move farm, until weaning. The weaning age/weight is agreed by both parties and could be based on age, weight or when an adequate proportion of the diet is coming from concentrates and forage rather than a milk based diet.

Once the calves have reached the end of calf rearing stage and are weaned, there are then four main options available.

Benefits for the dairy farmer

Additional land, labour and facilities provided. As the contract rearer is completing all works associated with the management and rearing of these calves from 11 days of age, they are in effect providing:

•Additional labour – which can be difficult to source. It also avoids employment law issues.

•Land – (if animals staying on rearer’s farm beyond rearing phase) – removes the problem of land availability and the exposure to substantial rental/purchase costs.

•Ease of management With the male calves now contract reared on another farm, there are fewer groups of animals on the dairy farm. This allows for increased efficiency and improved management of the remaining animal groups. It also significantly reduces the disease pressure on the remaining heifer calves in the calf housing area.

• Increased milk production and profitability. Where these calves were previously reared on the dairy farm, additional land can now be freed up for either grazing or fodder production. This provides an opportunity to increase milk output or reduce the need to purchase additional forage.

What are the advantages for the contract rearer?

•Cash flow and income Having an agreed fee per head per day gives the contract rearer a guaranteed monthly income independent of volatile beef prices. Monies are paid into the contract rearer’s account on an agreed regular basis and they can make plans and commitments based on having a stable monthly cash flow.

•No investment in stock There is now no/less of a requirement to avail of stock loans to purchase animals and the risk of paying excessive high prices to purchase livestock is reduced. In many cases, contract rearing agreements run in parallel with the rearer keeping stock of his or her own.

•Potential to be more profitable In an efficiently run contract rearing enterprise, a high level of performance can be achieved. Coupled with the removal of the risk of purchasing expensive animals and the beef price uncertainty, there is the potential to make the farm more profitable. What are the costs involved? Each rearing agreement will be different, depending on the arrangement between the parties. Therefore the fee per head per day will vary. The contract rearer will generally supply the housing facilities, land, straw, labour and management. Items to get clarity on in advance are in relation to milk replacer, calf starter concentrate, vaccinations, veterinary treatments, dehorning, castration etc. All of these areas, plus many others, need to be discussed and agreed on before any final fee can be arrived at.

For contract rearing to be a success it must be a win-win situation for both parties involved. A level of trust, honesty and flexibility must exist between both parties. Events may change, and things will go wrong, so good communication and a ‘give and take’ attitude are required. It is important to have a written agreement so that all parties are in no doubt as to their responsibilities. Contract calf and weanling rearing agreements provide an excellent opportunity for non-dairy farming enterprises to devise a different system of production. The contract ensures that in return for a good performance of the reared stock that they will be rewarded for their land, labour, facilities and management through a pre-agreed monetary rate per head per day. This allows them to better plan their cash flow, and they are not dependant on the sale of stock on two, or three, main selling days in the year. Dairy farmers have the reassurance that they have a destination to which they can move a number of animals from their holding at an early age, reducing the need for additional facilities, labour, etc. This allows them to allocate more time and resources to the main cow herd.

The Teagasc Contract Calf Rearing and Calf and Weanling Rearing agreements can be found on the Teagasc public website at https://www.teagasc.ie/rural-economy/farm-management/collaborative-farming/

More on calf rearing can be found here