While all of the video releases, podcasts and supporting material is available on the Teagasc and ICBF websites, see here, a sample of some of the content delivered is presented in this article.

Fundamental to achieving the reproductive targets outlined above is efficient heat detection. A missed heat can cost almost €150 when it occurs during a 12 week breeding season.  Failure to correctly identify cows in heat and inseminating them at the incorrect time are major limitations to achieving excellent reproductive performance.

Research conducted by Stephen Moore and colleagues at Moorepark has recently been published summarising the heat activity of dairy cows at pasture. On average increased activity associated with heat lasted for 17.2 hours while mounting activity lasted for an average of 8.7 hours. However there was considerable variation between cows in the duration of both heat activity and standing heat as shown in Figure 1. 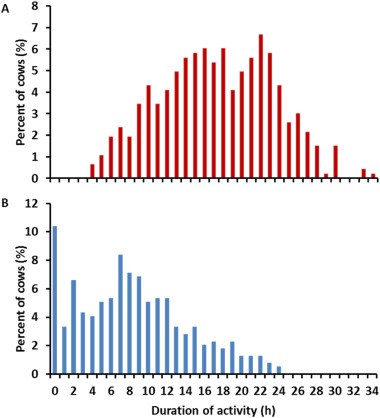 Stephen said that a variety of heat detection aids are available for use on dairy cows and maiden heifers. When used correctly, all are effective at increasing heat detection rate.

Irrespective of the aids used, Stephen recommended that farmers should begin heat detection three to four weeks before breeding actually begins to establish which cows are cycling and which will require further intervention.

Andrew Cromie, ICBF detailed the guidelines that have been developed by a DAFM-led dairy calf welfare working group, consisting of key industry stakeholders.

Stuart Childs, Teagasc Dairy Specialist, addressed the issue of managing late calving cows. On average almost 390,000 dairy cows (or more than one quarter of spring calving Irish dairy cows) calved after April 1st in 2019 and 2020 with almost as many calving in May and June as in April.  Because the reproductive cycle of the cow requires a period of rest and recovery after calving before she can go back in calf again, she requires a rest period of approximately 30 days after calving before commencing a treatment programme. Cows calving within four weeks of the start of the breeding season warrant special attention to help ensure that they go back in calf.  Stuart detailed two approaches that can be taken to shorten the interval between calving and breeding in such cows.

The Once A Day milking approach

This approach is typically used on low SCC, late calving or thin (BCS <2.5) cows. It works on the principle that once a day milking reverses the trend towards body condition loss in early lactation because of the reduced milk yield (typically 30% lower volume) compared to cows milked twice daily. Milking them once a day from calving speeds up the resumption of their reproductive cycle and such cows also have a higher conception rate to first service. Using the once a day milking approach, cows are typically AI’d within 50 days of calving. The loss in milk yield for a cow milked once a day for 40 to 60 days is approximately €55-75. Speaking at one of the breeding week webinars, Kerry dairy farmer William Dennehy strongly advocated this approach saying that he uses it every year on the few cows that calve on his farm after the first of April.

Stephen Butler at Teagasc Moorepark has looked at a variety of hormonal treatments to induce heat in cows that are calved 30 days or more but not cycling. The advantage of the hormonal treatment programme is that it promotes cyclicity in cows that are not yet naturally cyclic (however they should be 30 or more days calved at the start of the synchronisation treatment) and that they can be AI’d at a fixed time regardless of the signs of heat. Careful adherence to the times of administering the prostaglandin and GnRH injections and artificial insemination at the end of the protocol are absolutely critical to its success. Using this approach late calving cows are typically batched into groups and AI’d at an average of 45 days after calving. The treatment cost is approximately €40 per cow excluding AI cost.