Two compact blocks of calving for 10-12 weeks, starting in early February & early October, is an ideal structure to match winter supply and contracts for most liquid milk farms. However, James Dunne advises the relative proportion of the herd calving in each block depends on level of liquid contract

The table below estimates these numbers for a 100 cow herd. 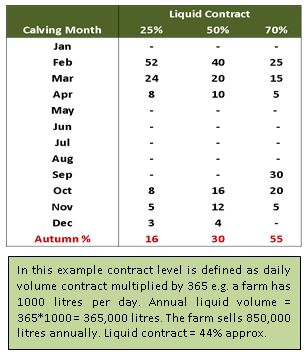 At liquid milk contract levels of <25%..

..calving 15-16 cows in autumn is sufficient. However, this raises issues in terms of cost viability, and practicality of managing small groups, particularly for with herds of <100 cows. In these cases total liquid milk bonus revenue should be calculated against the additional costs occurred to determine viability.

..in late autumn will meet a 50% liquid contract. Calving commences in early October, this maximises milk revenue over feed and ensures contract volumes for each month are met efficiently. October calving cows have similar feed costs to summer calving cows but will produce approximately 50% - 60% more milk output over the winter period.  This in turn lowers overall cost to supply fixed contracts.  Note the compact spring calving, meaning that the contribution of ‘stale spring’ or April-May calving cows to December-January supply is negligible. This is efficient practice.

..it becomes more difficult to calve compactly at the optimal times while still meeting daily supply requirements. Autumn calving moves to 55 cows and should start in mid-September, with late spring calving kept to a minimum as before. With this pattern, August/early September milk supply may fall below daily targets on the individual farm, but it is argued that the benefits of block calving to the farm should be recognised in such circumstances.

To meet winter contracts additional to liquid litres an extra 7-8 late Sep-Oct calving cows are needed for every 5000 litres per month of winter contract volumes (Oct to Mar inclusive), based on herds at 7000-7500 litre annual average production.