Hygiene of the utmost importance when cows are indoors


Mastitis in cows is almost always caused by bacteria that have gained access to the udder through the teat canal. During the dry period, bacteria can only enter the udder from the environment. George Ramsbottom, Teagasc Dairy Specialist tells us more about the importance of clean housing indoors.

Mastitis in cows is almost always caused by bacteria that have gained access to the udder through the teat canal. During the dry period, these bacteria can only enter the udder from the environment, i.e. from soil, manure, contaminated bedding or faeces. Bacteria such as E. coli or Strep. Uberis, which survive in the cow’s environment, can cause severe cases of mastitis. Anything that will reduce the numbers of bacteria in the cow’s environment or minimise the exposure of teats to these bacteria will reduce mastitis risk.

Cows are particularly vulnerable to acquiring environmental infections in the first couple of weeks after drying off (see Figure 1). The reason for this is because the process of teat end closure takes time to complete after drying off. The keratin plug that naturally forms after dry off takes approximately two weeks to form and completely seal the teat end. The use of teat sealants effectively imitates the role of the keratin plug. However not every teat end retains a teat sealant and their loss can leave the cow vulnerable to acquiring a new infection. 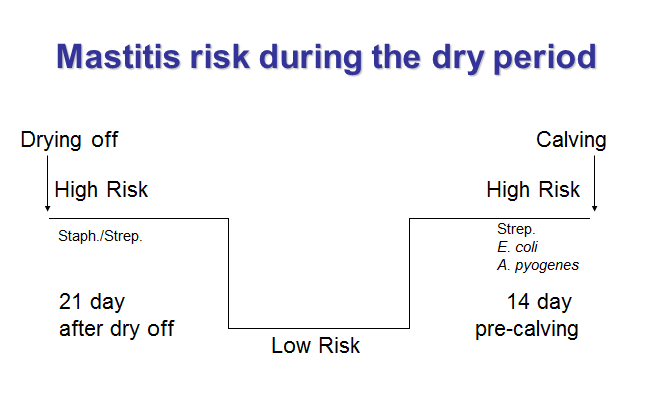 Whether milking or dry, dairy cows need a clean dry bed to lie on while indoors. A well maintained bed of sawdust keeps the bed dry. However when wet, bacterial growth is rapid and this can quickly result in high bacterial populations on teats. Adding hydrated lime to sawdust or wood shavings increases the pH and suppresses bacterial growth.

David Gleeson at Moorepark looked at the effects of dusting cubicles with hydrated lime, ground limestone or a mixture of the two. All products were effective at disinfecting the cubicles without any adverse reaction to cows’ teats due to the higher pH of the hydrated lime. However, it is important to apply the recommended level of hydrated lime (170g) per cubicle bed, as higher application rates than that specified are considered unnecessary due to the drying properties of the lime and possibility of deterioration in teat condition. In freshly calved cows housed indoors, SCC started and remained low in all treatment groups. Lower Staphylococcus spp. and Streptococcus spp. bacteria counts were observed on teats using the hydrated lime treatments. Irrespective of treatment group no lesions were observed on legs or udders and only normal changes in teat end condition were observed over the 6-week study period.

Further information on best practice in maintaining a high standard of hygiene in cows while indoors is detailed in the AHI publication ‘CellCheck Farm Guidelines for Mastitis Control’ in Management Note L, ‘The impact of housing on mastitis and SCC’ at pages 132-133.