In 2019, the Hearne family was awarded the top prize in the NDC & Kerrygold Quality Milk Awards.

The National Quality Milk virtual farm walk was broadcast live from the farm of Kieran and Ann Hearne, Co. Waterford on 30th June 2020. The broadcast was produced by Teagasc with the support of the National Dairy Council, Ornua and Glanbia Ireland. 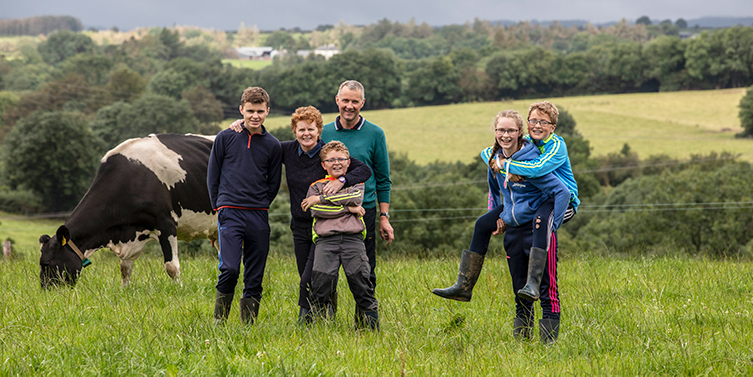 Rathgormack, Co. Waterford is home to Kieran Hearne, his wife Ann, their four children (Laurence, Fiona, Conor and Stephen) and Kieran’s mother, Ellen. In 2019, the family was awarded the top prize in the NDC & Kerrygold Quality Milk Awards. The Hearne’s milk 200 cows and their milk is supplied to Glanbia Ireland. Kieran started farming in 1992. The family had a herd of 28 cows with some beef cattle, sheep and poultry at this time. The Hearne’s farm has expanded and become increasingly specialised in dairying and rearing breeding bulls. The farm phased out the cattle enterprise on the farm by 2005. The farm currently consists of 82 hectares, comprising both owned and leased land. The milking platform is 52 hectares, of which 43 hectares is owned land with 9 hectares leased. The overall farm stocking rate in 2019 was 2.47 LU/ha with a stocking rate of 3.65 cows/ha on the milking platform.

The following are some of the environmental actions that Kieran carries out on his farm: 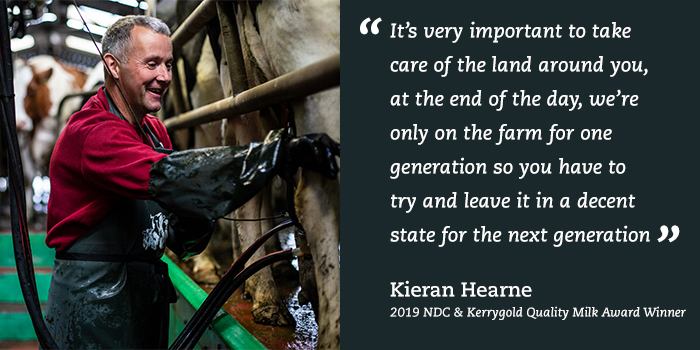 Kieran believes that animal health starts with having comfortable facilities for all his livestock.  Kieran has three different calf sheds and two automatic calf feeders on his farm with six different feeding stations to rear calves. The calf’s life starts off by being fed 3 litres of colostrum within the first 2 hours of life from the first milk of the calved cow. Kieran believes that plenty of colostrum and good deep straw beds gives the calves the best start to life. After a few days, calves are put on to an automatic feeder where they receive milk for 70 days. Ann Hearne and the Hearne children carry out most of the calf rearing tasks on the farm during spring. Kieran has full time help during the spring to help with calving cows on his farm. Having enough facilities and labour on the farm are of utmost importance for calf rearing.  Every cow has a clean dry cubicle to lie down on, while youngstock have slatted accommodation with straw lie-backs during the housing period. A spacious straw bedded area is available for calving. The Hearne family built a modern and bright milking parlour for milking his herd in 2008 with room in the collecting yard for 200 cows.

Kieran follows an animal health plan with all his stock where all breeding stock receive the following vaccinations.

Kieran and Ann Hearne both work full time on the farm as well as labour from the FRS and a local relief milker. Kieran has full time labour supplied through FRS for the months of February, March and April to help with the busy calving and calf rearing season. Kieran also uses labour supplied through the FRS for an average of one day per week for the remainder of the year to help with a variety of work on the farm. Kieran’s relief milker completes evening milkings during the remainder of the year. Kieran’s family also help out when required. Contractors are employed to do silage, round baling, slurry and reseeding and replacement heifers are contract reared. Kieran has a great team built around him with reliable farm staff, contractors, family and contract heifer rearer. Sustainability is a word often associated with dairy farming but Kieran believes that ‘farmer sustainability is the most important sustainability on dairy farms. Farmers need safe and comfortable facilities for operator and animal and all dairy farmers deserve a good work life balance on their farms’. 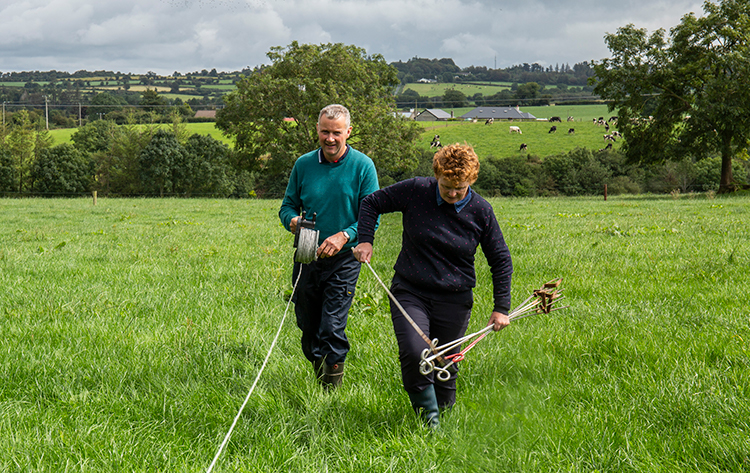 The following is a breakdown of the labour on Kieran’s farm during the 2019 season.

Kieran’s success is linked strongly to his attention to detail and one area where he excels is his herd breeding. Kieran’s herd is black and white with its origins derived from Dovea AI genetics. Kieran has always had a good shapely cow with good milk yields and excellent fertility and this fertility has allowed Kieran to grow his herd from 28 cows in 1992 to 200 cows in the current year. The table below lists the herds current (May 2020) Economic Breeding Index (EBI) and sub-indices.

As can be seen from the table above, Kieran has one of the top herds in Ireland and consequently it is not surprising that several bulls from the herd feature on the 2020 ICBF Active Bull list. Kieran also has a breeding bull enterprise on the farm where he sells breeding bulls from his CURRA herd. Kieran believes that good breeding and calving practices are very important for quality dairy farming, saying that they actively aim for compact calving and try to avoid late calvers to minimise the workload. The Hearne family place a big emphasis on strong hygiene practices on the farm to ensure high quality milk is produced. Grass however is the main ingredient. They believe that keeping good quality grass in front of the cows for as long as possible in the year and providing high quality silage for winter feed makes a big contribution to milk quality. Kieran aims for a long grazing season targeting 290 days at grass every year. Cows are generally turned out by day on the 14th of February each year, and target housing date is 25th November. 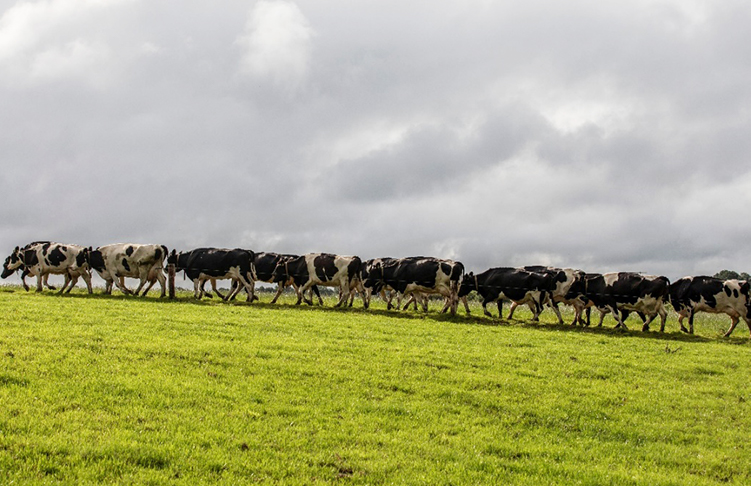 As well as incorporating a number of other farm factors, the annual NDC & Kerrygold Quality Milk Awards competition rewards excellence in SCC, TBC & Thermoduric levels in raw milk. This raw milk is then processed into products which are sold around the world into international markets.

So what are the key practices followed on the Hearne farm to ensure consistently high quality milk?

1. Milk recording has been carried out for years on the Hearne farm. Four milk recordings are undertaken annually and these provide valuable information on cow performance and individual cow SCC levels.

2. A chlorine free wash routine has been adopted on both the plant and bulk tank. Kieran is using an approved product and following the recommended routine as provided by the product manufacturer.

3. Selective dry cow therapy (SDCT) has been adopted on this farm for the last two years. Kieran selects cows for SDCT based on the milk recording results. On this farm, his decision rule is that the cow must have an SCC of less than 70 and no clinical cases of mastitis.

4. Gloves are worn at every milking. The cows’ teats are cleaned where necessary and checked for mastitis. Post-milking, the cows are teat sprayed and exit the parlour calmly.

5. The cows are milked through an 18 unit GEA milking parlour. ACR’s along with a well laid out collecting yard and exit yards make the milking process very seamless for both the cow and the milker.

6. Farm roadways and yards are maintained in a clean state. The collecting yards and exit yards are scraped and washed down daily.

7. Mastitis cows are drafted out and milked last. After treatment, and when the withdrawal time has passed, Kieran checks each quarter using the CMT paddle before allowing the milk back into the bulk tank. 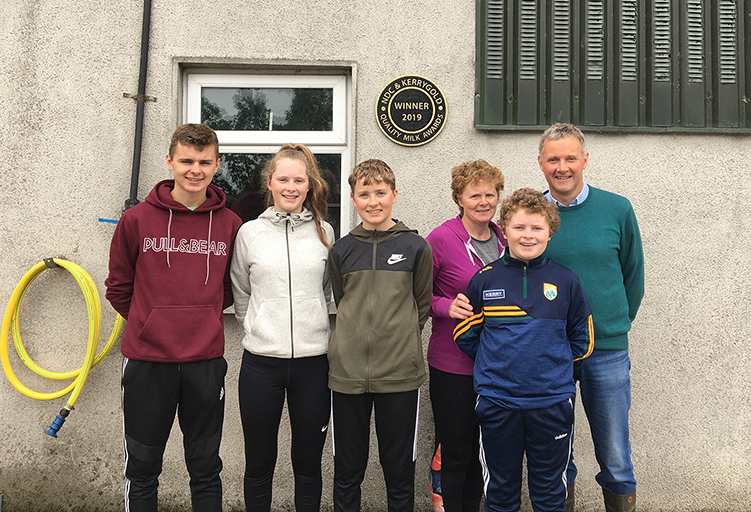 You can check out the Hearne's social media takeover in our story highloights on Teagasc Instagram or using the #virtualmilkwalk on Twitter.