On the scent: the aroma of raw milk


Pioneering research undertaken by Teagasc, in association with University College Cork, has shown how cows’ diets affect the aroma of raw milk.

Ireland’s predominantly pasture-based feeding system for milk production is relatively unique when compared to most other countries (which use a predominantly concentrate-based system). Many factors influence this decision, but it’s mainly related to the fact that Ireland’s climate makes it more economically feasible to do so.

It has long been believed that diet affects the flavour of raw milk, but this has proven difficult to verify without the identification of the specific compounds responsible. To address this, Teagasc and University College Cork (UCC) used a combination of techniques to successfully complete the first in-depth study demonstrating the impact of diet on the aroma of raw bovine milk.

Previously conducted sensory studies have highlighted subtle differences in milk from pasture and non-pasture diets. Most of these differences relate to visual or textural differences, as these are easier to determine. Differences in colour relate mainly to a higher β-carotene (pigment) content in pasture-derived milk, giving it a more yellow or less white hue. Texture differences can be perceived in the mouth, due to changes in the fatty acid profile of milk.

Whilst flavour is a combination of taste and aroma, aroma has a much greater influence, so to improve their chances of success, the researchers focused on the volatile organic compounds (VOC) found within the raw milks. 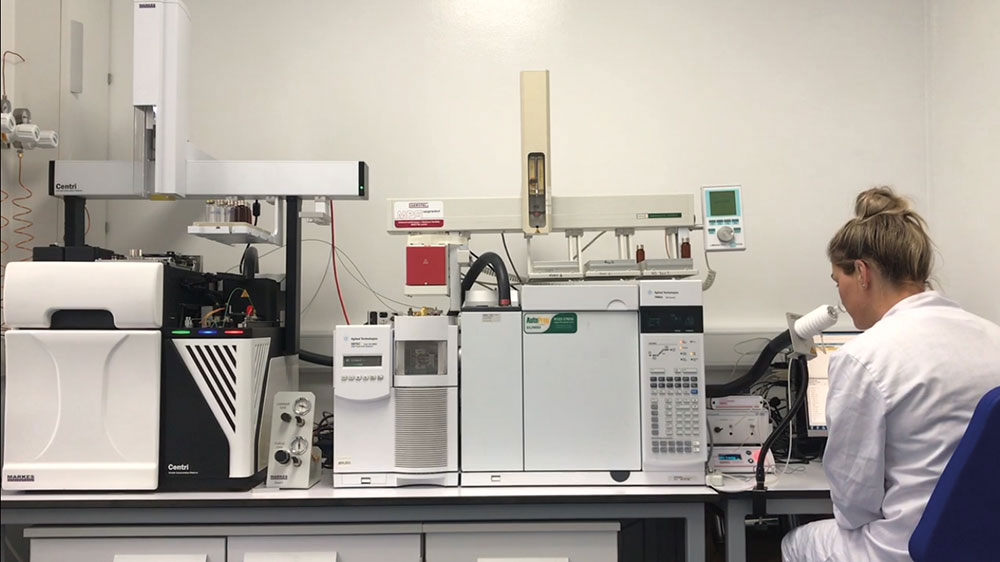 The VOC profile was extracted from the raw milk using a novel advanced high capacity extraction process. It was then separated and identified using an instrumental technique known as gas chromatography mass spectrometry.

“We identified 99 VOC in these milks – significantly more than any previous international study,” says Kieran. “In addition, we demonstrated that 33 of these VOC were also present in the diet and in the rumen (stomach compartment), highlighting the significance of the direct transfer of VOC from feed to milk.”

The results also highlighted that the VOC content of raw milk from pasture and non-pasture diets were very similar, which was in line with previous studies. Furthermore, the abundance of only 13 VOC varied significantly based on diet alone.

“This finding was very important as our ability to perceive aroma is impacted by both the abundance and the odour threshold (the concentration above which we can perceive it) of each individual VOC,” explains Kieran.

“To determine which VOC influenced the aroma perception of these milks, we used a technique called gas-chromatography-olfactometry (GC-O). GC-O essentially involves trained panellists acting as an additional detection system in combination with the spectrometry detection.

Very few GC-O studies have been undertaken on raw milk, potentially because of its subtle flavour, which makes it difficult to discern aroma characteristics. To overcome this, researchers ensured the VOC were concentrated sufficiently prior to separation by GC, in order for it to be more easily perceived by the olfactometry panellists. This was only achieved by using this novel high capacity sorptive extraction system.

Approximately 30% of the VOC were deemed odour-active by olfactometry. Even though the raw milks derived from both pasture and non-pasture diets shared many odour-active VOC, enough differences existed in their abundances to result in differences in their respective aromas.

Raw milk derived from a TMR diet was judged to have a higher OI, with many of the odour-active VOC derived from Maillard reactions (a non-enzymatic reaction indicated by heat). This led the researchers to conclude that they were directly transferred from the TMR, but must also have been created as a result of the heat-treatments used to produce the TMR feed itself.

“As the first of its kind, this study is important in our understanding of the relationship between diet and the aroma of raw milk,” says Kieran. “It highlights the significance of both the direct and
non-direct transfer of VOC from diet to milk, that subsequently influence aroma perception and thus flavour.”

Below are some of the aromas most associated with both perennial ryegrass and total mixed ration raw milk:

80% of flavour is influenced by aroma molecules.

We’d like to thank Deirdre Hennessy (Teagasc) and Joe Kerry and Maurice O’Sullivan (University College Cork) for their contribution to the study this article is based on.

This study was funded by Teagasc and through the Walsh Scholarship Programme (reference number: 2016071), under project 0044: Profiling Milk from Grass.

This article featured in the TResearch Summer 2022 Magazine. TResearch is an official science publication of Teagasc. It aims to disseminate the results of the organisation’s research to a broad audience.

If you liked this article, you might like others in this publication.  View TResearch Summer 2022 here (PDF)