John Upton Teagasc, Animal & Grassland Research & Innovation Centre, Moorepark, advises calculating the energy costs of your farm in cents per litre of milk produced, as a useful exercise to benchmark efficiencies against national averages and other farmers. He discuses the role of solar panels

The average cost of electricity usage on Irish dairy farms is €5 per 1,000 litres of milk produced.  There is a large variation in that figure, from €2.50 to €9.00 per 1,000 litres produced, or from €15-€50 per cow per year. The main drivers of energy consumption on dairy farms are milk cooling (31%), the milking machine (20%) and water heating (23%). A more detailed breakdown of energy consumption is illustrated in Figure 1. 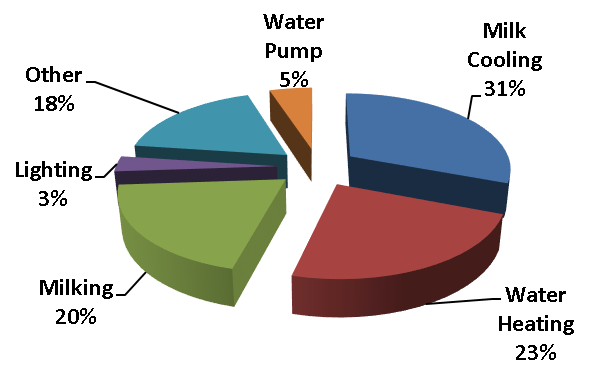 How to calculate your energy costs

A simple calculation can be made to approximate your on-farm electricity costs. Firstly, add up the total electricity charges over a year excluding standing charges, VAT and PSO levy; these figures can be found on the electricity bill. Next, add up the total number of litres of milk sold to the processor over the same period. Dividing the electricity cost in Euro by the number litres will give the cost in Euro per litre, multiply by 1,000 to get costs per 1,000 litres. The average three-bedroom house in Ireland uses approximately 5,000 units of electricity per year. This can be deducted to account for domestic usage if the dwelling house is on the same meter as the farm.

How to reduce your energy costs

The first place to start to reduce energy costs is to utilise night rate electricity wherever possible (especially for water heating and morning milking), because it is roughly half the price per unit compared with day rate electricity (~€0.09 per unit vs ~€0.19 per unit). Next use a cost comparison website (e.g. www.bonkers.ie) to check if you are paying over the odds on your unit rates. Once this is in order, evaluate the possibility of using more energy efficient technologies such a plate coolers, heat recovery units and variable speed drives.

The benefit of these technologies on your farm can be evaluated very quickly using the Dairy Energy Decision Support tool (DEDST). It is available to use for free via an online platform at: https://messo.cit.ie/agri-energy. The DEDST can be used to obtain farm specific recommendations related to energy use, technology investments, CO2 mitigation and renewable energy generation.

How to deploy renewable energy on your farm

Solar Photovoltaic (PV) cells are the most cost effective method of generating renewable energy on a dairy farm. These PV panels generate electricity using energy from the sun, which in turn can be used by the farm. These systems can be stand-alone (i.e. the generated electricity is only used by the farm) or grid connected (where surplus electricity is fed into the national electricity grid). In Ireland, there is currently no payment for export of electricity to the grid from small scale PV systems (though this may change in the future). Hence, the most logical solution for Irish farmers would be a stand-alone system, sized so that all electricity generated is consumed by the farm. For a 100 cow spring calving herd, the ideal PV system size is approximately 6 kWp of installed capacity, which would cost in the region of €7,500 (plus VAT). In the absence of a capital investment grant, this system would have a payback period of 10 years. If a 40% capital grant was utilised (PV systems up to 11 kWp are covered by TAMS), the payback period would fall to six years, while a 60% grant would make the payback period fall to four years. The inclusion of a 6 kWp PV system would result in 30% of the farm’s electricity being provided by a renewable source and would offset more than 2.4 tonnes of CO2 per year. PV systems qualify for accelerated capital allowances (i.e. the entire cost of the installation can be written off against tax in the year of purchase), which would further reduce the payback period (check the benefit of accelerated capital allowances for your farm with your accountant).

Calculating the energy costs of your farm in cents per litre of milk produced is a useful exercise to benchmark efficiencies against national averages and other farmers. To reduce farm energy costs, deploy efficiency technologies first to reduce demand. The next step is to evaluate Solar PV panels to further reduce fossil energy use. Solar PV panels can reduce farm CO2 emissions and deliver a short payback period if the TAMS grant and accelerated capital allowances scheme are availed of.

In the below clip, John Upton, Teagasc Research Officer provides some advice as to how to increase the energy efficiency on dairy farms.

This article was produced as part of the two-day Virtual Dairy Conference 2021 which took place on 23 and 24 November.

The complete Dairy Conference Proceedings can be viewed here and the individual articles will be published on Teagasc Daily throughout the week.