An extra profit of €250 or more per cow together with benefits for water and air quality is achievable on average Irish Dairy farms when a sensible spring fertiliser and grazing plan is followed. Tom Murphy, Dairy Adviser, Teagasc Galway/Clare advises how by making best use of spring grass

On Dairy farms, where cows can graze from early February, the grazed grass costs about half that of quality silage and less than a third of the cost of Dairy ration. Our National Farm Survey analyses show that Irish Dairy farmers grow about 10.5t (DM) of grass compared to 13.5t (DM) or more grown on research farms. Also, a trawl through grass growth figures of Dairy farmers using the PastureBase Ireland (PBI) online grass measuring programme (used by the more ambitious grassland farmers), shows their grass growth is high in the mid-year summer period, but noticeably a shortfall in the region of 2t of grass DM/ha is evident in the spring period. A shortfall of 2t (DM) grass herbage at farm level costs in the region of €500 per ha, or €200 to €250 per cow when stocked at 2.5 to 2.0 cows per ha.

Too many Dairy farmers underestimate the spring growth potential of grass, when fertiliser is applied correctly. Numerous grass and grazing trials, at various research centres on the island of Ireland form the basis of Teagasc Spring Dairy Grassland Management recommendations. Back in 1984, Moorepark trials (McCarthy) showed that the date in spring at which a given grass yield is obtained, could be brought forward by at least 3 weeks, when Nitrogen  fertiliser was applied at the correct time.

More recent trials (Moorepark, 2013 to 2016), show that by following the grassland management blueprint, important gains can be achieved at farm level, such as:

It’s not as simple as more nitrogen and earlier, though! Achieving the correct balance will deliver the best results for production and the environment. Applying more Nitrogen than growth can support can be detrimental for the environment as well as the pocket. Again, PBI data shows us that too much Nitrogen is used/wasted in the mid-year period. Sometimes, fertiliser use far exceeds demand or does not allow for growth and grazing potentials, often leading to excessive cutting of surplus bales. Sometimes this silage is fed at times (especially in spring), when cows should be out grazing!

Typically, the first grazing rotation on the Dairy farm extends from early February (from the start of the spring calving) to early April. Most tuned-in Dairy farmers are well aware of the recommended Spring Grazing Plan as well as the many benefits from achieving the recommended grazing targets. However, spring grazing plans will fail on any farm that does not have an appropriate spring fertiliser plan to match it.

On drier fields, early spring grass growth potential supports the application of 23 units of nitrogen from organic or chemical applications. Most farms will have about one third of the grazing area with covers of 600kg/ha or less. This area should be targeted for slurry spreading from mid-January.  Apart from the acclaimed benefits to water protection and reduced Green House Gas Emissions, spreading slurry using the LESS system in spring allows more land to be spread and re-grazed by cows sooner than conventional spreading.

Also, more slurry nitrogen is retained and available for grass growth (LESS gives an average nitrogen retention of 65% compared to 46% for splash-plate use). The target slurry application is 2,500 gallons/acre, to supply the 23 units/acre of nitrogen, to no more than one third of the grazing area. On many farms there will be another opportunity to apply a similar amount of slurry (2500gals/acre, using LESS), to a second third of the milking platform after grazing, by early March. Abide by the guidelines for Good agricultural Practice and the Nitrates Regulations when applying slurry at all times of the year.

Remember, when you get the slurry applied correctly, you must reduce the chemical (bagged) nitrogen use accordingly. The grazing area which does not receive slurry in early spring should receive 23 units of bagged nitrogen by early February, when soil temperature has reached 5°C or higher. Ideally, fertiliser nitrogen needs about 3 days with little precipitation following application to become safely incorporated into the soil.

The second split of fertiliser nitrogen should be applied in late February or March. Growth potential will then support the use of 46 units/acre of fertiliser nitrogen. Any area receiving slurry at this stage should only receive half the rate of bagged nitrogen (23units/acre). All bagged nitrogen can be blanket spread, for both applications in spring. In addition to spring nitrogen, recent research shows a response, to very small amounts of sulphur on some soils, and to phosphorus on soils low in P. Where applied there was an increased level of nitrogen recovery. Protected Urea has been shown to be at least (if not more) effective at growing grass in spring as other forms of nitrogen. However, because of Protected Urea’s huge benefit towards reducing ammonia losses and Green House Gas emissions, all Dairy farmers should aim to use it in spring. 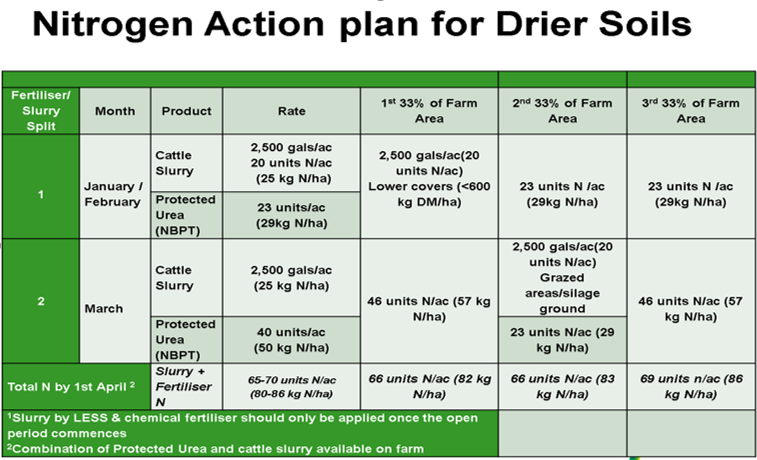 For parts of the farm with heavy/wet soils, the timing and amount of slurry and bagged nitrogen application needs to be modified to allow for ground traffic-ability, potential growth and likely nitrogen recovery. The old rule of thumb states that “if you can’t travel the land without rutting it with the tractor, then it’s too wet for nitrogen”. 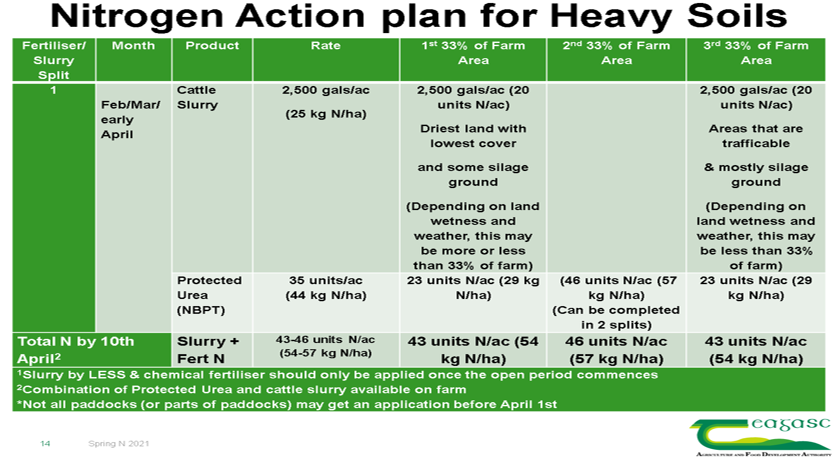 Realising that the economic response to early nitrogen use is high, ambitious Dairy farmers have found ways to achieve the target fertiliser spread dates and levels, as well as affording maximum protection to the environment. Some of these are worth listing:

Now is the right time to start the grassland management year - as you mean to go on!