Birds and Bats in Kildalton College

This diversity of wildlife requires suitable habitat such woodlands, ponds, field margins and hedgerows which are all in abundance in Kildalton. The management of these habitats and the development of new habitats to enhance biodiversity is a priority for the college. As part of the All Ireland Pollinator Plan, amenity lawns are managed through reduced altered mowing regimes to provide food sources for pollinators. In 2019 the college planted in excess of 400m of new native hedgerow and it is planned to plant similar amounts over the next five years. It is also planned to increase the areas of field margins and plant new areas of native trees.

Birds using hedges in Kildalton include the blackbird and the song thrush, where the height is well above the minimum 1.5m providing great cover around the nest, protecting them from predators, both ground predators such as the fox and overhead predators like birds of prey. Blackbirds use woodland edge and hedges but forage widely over fields foraging for earthworms and other soil invertebrates. As they eat fruit, blackbirds are found in the orchards in Kildalton. The song thrush is more elusive than the blackbird, foraging less in the open. They like the woodland and also the orchard as they too eat fruit.

Other birds using the hedges in are the wren- the most commonly occurring bird species in Ireland – well known by its loud song, and the robin a common and widespread species in Kildalton  seen singing from prominent perching posts on individual small trees retained within hedges to mature and provide flowers and fruit for birds and bees. The dunnock also uses the hedges.

Sparrowhawks were thought to be nesting in the woodland. The buildings and farmyard offered suitable nesting opportunities for swallow, house martin and starling, as well as jackdaw, feral pigeon, collared dove and pied wagtail.

Woodpigeon were recorded on the trees on the avenue into the college, (a habitat rarely used by other species) as well as in the woodland and in hedges with tall trees.  Chaffinches also use these standard trees on the avenue. As they eat seeds, they are found in the farmyard and horticultural area.

Insectivorous birds recorded in Kildalton which forage in the leaves of trees are the blackcap, chiffchaff, willow warbler, and potted flycatcher – all being summer migrants to Ireland. Another insectivorous bird that resides here all year round is the goldcrest – Ireland’s smallest bird.

The tit species present in Kildalton (blue tit, great tit, coal tit and long tailed tit) are associated with the woodland but as they nest in holes and cavities, they can be found in buildings if suitable nest sites are available. Nest boxes erected have been used by blue tits and great tits. The long tailed tit prefers low scrub to woodland.

Seed eating passerine species (house sparrow, bullfinch, greenfinch, linnet and goldfinch) which often flock together are found where suitable food is available in Kildalton – generally tillage areas and of course they love crops sown for wildlife and left unharvested. The bullfinch is associated with hedges.

Bats recorded in Kildalton college were: Leisler’s bat, brown long-eared bat, Daubenton’s, Natterer’s bat and the three pipistrelle bats. Bat activity was very high over a pond adjacent to woodland which also has good connectivity with hedgerows. They were recorded commuting along hedgerows and within woodland. There was low bat activity in open fields with the fast flying Leisler’s bat being the only bat which can fly in the open landscape. Bats prefer to commute along linear habitats such as hedges, watercourses and the edge of woodland because they use echo location (sonar) to guide them. Soprano pipistrelles and common pipistrelles were recorded in the woodland and in the orchard. Daubenton’s bats were associated with the pond. All Irish bats eat insects. The small pipistrelle bats eat up to 3,000 insects every night, ensuring a build up of fat to allow them survive the winter deep in hibernation. 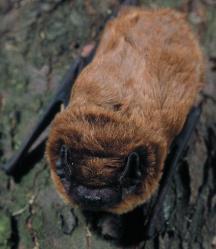 To see all of the activity of Hedgerow Week follow this link https://www.teagasc.ie/environment/biodiversity--countryside/farmland-habitats/hedgerows/