Consider planting a hedge this Spring


Ever thought of planting a new hedge using native species of hedgerow to help improve biodiversity on farm? Planting can be done up to end of February while plants are dormant, to allow settling in time before growth starts. John Crowley, Beef & Sheep advisor Teagasc Clonakilty, has planting advice

As we are in late winter it might be worth considering planting a new hedge using native species of hedgerow i.e. whitethorn (hawthorn) mixed with an odd crab apple, dog rose, guilder rose, hazel etc. to help improve biodiversity on your farm.  Planting can take place up until the end of February while the plants are still dormant and give them time to settle in the ground after planting.

Biodiversity is made up of flora, fauna and the habitats in which they exist. Flora are the plants, mosses, lichens and fungi whereas fauna are all the animals, birds, mammals, insects, reptiles, fish etc. However not all fauna and flora are good.  We want native Irish biodiversity that have been here since the last ice age as they are the species that are most suitable and adaptable to our Irish climate and seasons. For example, native species such as willow, oak, birch and whitethorn can support between 200 to 300 invertebrate species whereas non-native such as sycamore and sweet chestnut can only support between 6 and 30 invertebrate species. Have you ever walked in a West Cork woodland and observed mosses and ferns growing on the branches of a large Oak tree?  Keep an eye out the next time you visit a native woodland such a Glengarriff Woods or Lough Hyne amongst others.

Native Irish species are in tune with each other with the timing of flowering suiting associated dependent species. It is also important to have plants grown from seed in Ireland as they are in tune with our seasons unlike planting a non-native plant imported from Europe where it acts differently.

Non-native species.  We do not want ornamental garden plants outside of the garden or non-native species (introduced) plants or trees such as sycamore, horse chestnut and beech as they do not support as many species as the native plants.  We definitely don’t want invasive alien species such as Japanese knotweed, rhododendron etc. as they are aggressive, take over and push out native Irish species.  Some, more so than others.

Why worry about diversity?

Biodiversity is in decline worldwide and in Ireland. One million animal and plant species are threatened with extinction and the changes that have happened in the past 50 years have been more rapid than any other time in human history so by planting a new hedge, you may help stop the decline of biodiversity.

Hedgerows help to control of livestock; they are also very important sources of shelter for cattle and wildlife, particularly in cold wet weather. They enhance the landscape and improve the scenic appearance of the local area.  As well as being sources of shelter to wildlife, they are also sources of food by way of the flowering plants to insects during the summer and subsequently the fruit of the plants for the birds during the winter.

First decide on where to plant the hedge: a good location is along a farm road as it can be accessed from both sides for trimming and maintaining it.  Another location is along an existing wire fence which will not be changed in the future layout of the farm, as hedges are landscape features under cross compliance.  Get bare root plants such as whitethorn quicks and native trees from your local garden centre but keep the roots covered until they are planted to protect the root hairs from drying out.  Dig up the area to be planted using a JCB or mini digger to loosen the soil and make planting easier.  Put the spade into the loose earth, push the spade forward, place the quick at the back of the spade and hold as you pull up the spade.  Firm the soil around the quick with your boot.

Plant 6 to 8 quicks per metre length of hedge in a double staggered row and space the quicks 25 to 30cm from each other.  When planted, prune the whitethorns at an angle to 10 cm high, 20cm high in winter of year 2 and 30cm high in winter of year 3 as this will encourage the whitethorns to fill out the sides and create a stock proof hedge.  Each time you cut in year 2 and 3, as much as 8 branches emerge from the top of the stem which in time will make for a much thicker hedge.

Leave an occasional whitethorn to grow as a tree so that it will flower and fruit. Also do not prune the trees that you intend to plant with your whitethorn hedge.  After pruning, get a strip of silage pit plastic, push it through the pruned stems and anchor the plastic on the ground by putting stones on the plastic and tucking in the edge of the plastic into the soil using your spade. This will prevent grass and weed growth from smothering your new hedge in the early years and will give the hedge a great start. Do not throw soil on the plastic as the competing grass will grow on the plastic thus defeating the purpose of the plastic.   Finally fence off the newly planted hedge from livestock (preferably with sheep wire and one strand of thorny wire on top) to protect it from cattle pulling the plastic off the hedge. 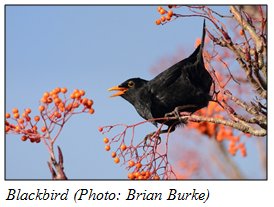 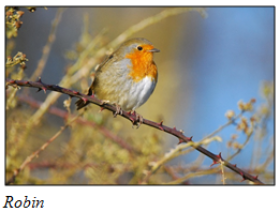 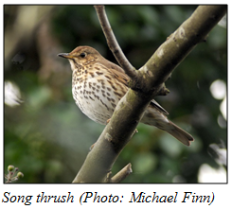 By planting a hedge on your farm this spring, you will make a valuable contribution to increasing the biodiversity on your own farm and improve the scenic appearance and enhancement of your local landscape.  You will also help to increase the population of native birds such as the thrush, blackbird, robin and wren amongst others on your farm in years to come by providing a nesting site and food source to sustain them.