Suspended sediments in rivers and lakes are a significant, but often underestimated, pollutant. Their polluting quality can be due to both the chemicals that are transported in association with the sediment, such as nutrients bound in soils, as well as the physical changes that sediment-loading can cause to the aquatic environment, such as making water murkier. Not only does the movement of sediment from the land negatively impact aquatic environments, but it also causes losses in productivity and capital to farmers who use these sediments as topsoils. Because of this, understanding the way in which sediments move into surface waters, and why, is a key area of study when looking to protect both water quality and farming interests.

The Agricultural Catchments Programme (ACP) has been collecting data relating to both the physico-chemical properties of soil and the quality of river water within agricultural catchments in county Wexford for over ten years. I was introduced to this incredibly valuable dataset while undertaking my Master’s degree in Conservation and Biodiversity at Lancaster University (UK). Alongside my supervisors Per-Erik Mellander (ACP) and Professor Phil Haygarth (Lancaster Environment Centre), I designed a research project to investigate how two differently managed, but physically adjacent, catchments in Wexford responded to heavy rainfall events.

Castledockrell (Figure 1) is a catchment that is dominated by arable agriculture. It is an ideal catchment for arable farming, with soils that drain well throughout the year. This means that the soil is infrequently saturated (i.e. ‘full’ of water). Thus, the generation of overland flow (where rainfall runs off of the soil when it cannot soak into the soil) is limited to small corridors of land. Ballycanew (Figure 2), on the other hand, is dominated by grassland agriculture. Only around 20 percent of the land is usable for arable farming because much of the area is composed of heavy mud soils, which drain poorly. As a result, the soils stay water-logged for much of the year, and overland flow is readily generated. This is an important distinction, given that overland flow is a major transporter of sediment to rivers and lakes.

Figures 1 and 2: A typical field in the Castledockrell catchment (left), versus the Ballycanew catchment (right). The land use, and associated soil properties, of these catchments contrast greatly.

With this knowledge, I compared data collected from the two catchments relating to soil saturation, rainfall, river discharge, and suspended sediment, from 2010 to 2019. I was particularly interested in how these figures changed during and after a heavy rainfall event; heavy rainfall events are an important feature in sediment dynamics, with the ability to move larger-than-normal amounts of soil and surface material over a shorter period of time. For maritime climates, like that which influences Ireland, these events often occur during winter, when the ground is already wet, making agricultural land highly vulnerable to sediment loss. This study identified a number of potential factors, from the rainfall event through to the delivery of sediment to rivers, which may affect how much sediment makes its way into rivers (Figure 3). 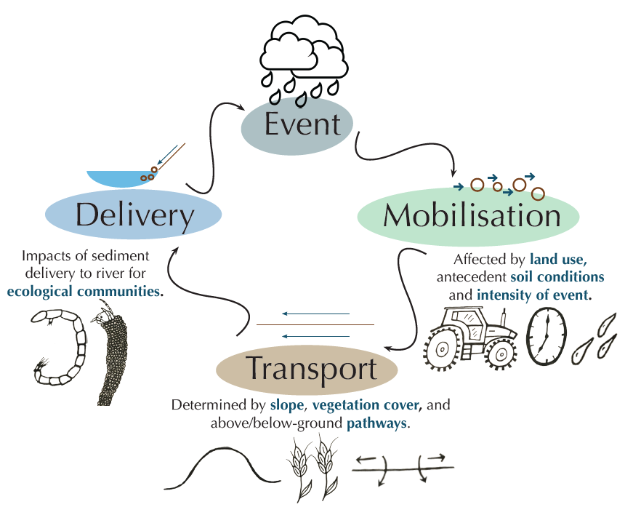 Figure 3: Adapted from the phosphorus transfer continuum (Haygarth et al. 2005), this infographic identifies the key stages of sediment movement in agricultural catchments, and the factors that may impact it.

What did we find?

The analysis of these data highlighted that while the type of land use may be important in adjusting sediment dynamics in agricultural catchments, there is not a clear-cut relationship. The average amount of suspended sediment seen in the river at Ballycanew was consistently higher during heavy rainfall events than at Castledockrell (Figure 4), indicating that there may be more soil moving across the land and into the river. This would make sense, given that the soils in the Ballycanew catchment were fully saturated for up to six months of the year, each year, throughout the study period. As a result, for six months of the year, when rain falls on the land it has nowhere to go and runs straight off the field into drainage ditches with plenty of topsoil in tow. While the poorly draining properties of the soils are natural here, they are likely not helped by grazing cattle that compact the soil with their hooves, as well as the fast-acting artificial drainage that gives the soil-laden runoff a quick route to the river. Unsurprisingly, the aquatic invertebrates found in the river running through Ballycanew were more typical of rivers that are high in both suspended and deposited sediment, being tolerant of turbid water quality and less oxygenated riverbeds.

­The understanding gleaned from this research helps us to appreciate that the factors­ affecting the erosion and movement of agricultural soils are multifaceted; because of this, it is exceedingly important that catchments are managed for soil-losses on a case-by-case basis, ideally with decisions backed by monitoring-based evidence.

The Agricultural Catchments Programme (ACP) is running a week of social media releases showcasing some of its activities from Monday 21 February to Friday 25 February.  The week’s theme is  “Working Together for Water Quality”.   More details of what is on can be found at www.teagasc.ie/ACPweek22

The Agricultural Catchments Programme (ACP) was established in 2008 and is funded by the Department of Agriculture, Food and the Marine