Paul Fitters, Lecturer in the Teagasc College at the National Botanic Gardens discusses "Rewilding" at the Knepp Estate in the UK. Improving biodiversity opened up new diversification opportunities. He has suggestions for how we can all do our bit for biodiversity and rewild a little in our gardens

In 2001, the owners of the large Knepp estate in West Sussex in the UK found they were no longer making ends meet. They stopped farming altogether, sold their stock, took out all the internal fences and released deer, longhorn cattle, Dartmoor ponies and Tamwort pigs (all relatively close to their wild ancestors). The next thing they did? Nothing. The aim was to increase biodiversity, but not only did the animals multiply, their behaviour set in motion a cascade of events that led to an explosion of insect numbers, followed by a dramatic increase in birds, bats, mammals etc. The estate now has the highest number of nightingales, rare turtle doves and purple emperor butterflies, to name but a few species. The owners make a good living by selling organic meat (culling is essential, as there are no wolves or other carnivores to keep the numbers down), organising safaris in their ‘wilderness’ and offering glamping events for nature lovers. See Knepp Estate website  Such ‘rewilding’* seems to me the way to go in conservation.

Rather than actively conserving an area for the sake of one species, why not leave areas do their own thing, so that more species might benefit? However, these protected areas remain vulnerable to extinctions if small and isolated. We need corridors between these core biodiversity areas, so that animals can travel from one to the next. Corridors can be hedges, road sides, railway lines etc, but also gardens. Private gardens are small, but numerous, and can represent more than onethird of some cities’ surface area and are essential for connecting parks and countryside.

What can you do?

Similar to the Knepp estate, perhaps you should do ‘nothing’ by leaving part of your garden to ‘do its own thing’. Start by doing less mowing. A ‘well kept’ lawn is really a monoculture with just grass and little biodiversity. Not mowing will allow daisies and clovers to flower, which in turn will attract pollinating insects like bees. You can mow a path through your wildflower meadow so that you have access and it will still look kept. Why not clean up less? When I cut back my herbaceous plants, I drop the prunings wherever I can. This saves me bringing it to the compost heap, and having to bring it back next year. This adds a natural layer of organic matter, which feeds the soil and provides habitats for animals. Similarly, if you are pruning trees, leave some of the wood lying around as valuable habitats for fungi and beetles. However, if plant material is diseased, such as black spot-infected rose prunings, dispose of it carefully. Finally, if you have the space, a pond would really finish off your garden rewilding project. Ponds are a magnet for wildlife. In short, the more different habitats you can create in your garden, the more wildlife it will attract. With less maintenance to do, you can start spending time observing and enjoying the biodiversity in your garden.

*"Rewilding" was coined by conservationist and activist Dave Foreman, (1990) 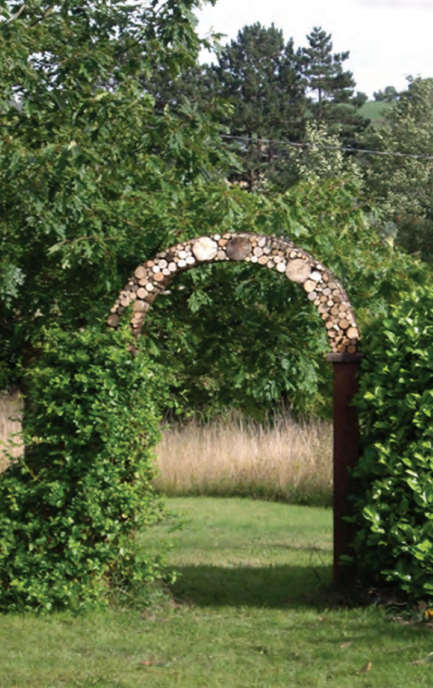 Archway made of locally produced logs creates an attractive entrance into a meadow.

See more on the Botanic Gardens College of Horticulture here