The immense value of hedges on Irish farmland to biodiversity, carbon and landscape is increasingly being recognised in legislation and cross compliance. Catherine Keena, Teagasc Countryside Management Specialist and Anthony Dineen, Teagasc Advisor simplify the rules and regulations around Hedges.

The immense value of hedges on Irish farmland to biodiversity, carbon and landscape is increasingly being recognised under legislation and cross compliance. So what does this mean to you? The latest requirement applies only if you are availing of the Nitrates Derogation but all farmers need to be aware of rules and regulations when cutting hedges and if planning to remove hedges. If thinking of removing hedges, there are two important and separate considerations: Cross Compliance and EIA (Agriculture) Regulations 2011.

This year in 2020, for the first time, farmers on Derogation farms, who are availing of the Nitrates Derogation have committed to undertake a Biodiversity Option. This relates to hedge management and farmers must undertake at least one of two options – where hedge cutting is being carried out. There may be some hedges on farms which are not cut and that is acceptable, provided they do not encroach into fields. 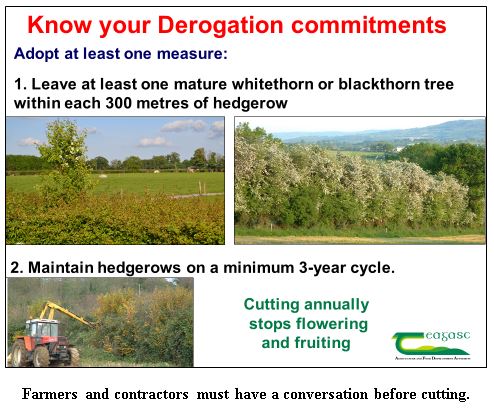 The first option is to retain at least one thorn tree in every 300 m of hedge. This can be a whitethorn or blackthorn, either of which are present in practically every farm hedge in Ireland. It can be an existing mature thorn tree although these are rare in topped hedges where other trees such as ash are retained if any. Or a new thorn sapling can be retained from within the hedge. It may be easier to leave a bunch in the first year, which can be thinned to a single stem later.

Thorn trees provide many benefits. The flowering May bush is a beautiful landscape feature around first cut silage time. The flowers provide flowers for bees and their haws provide food for birds. Birds such as blackbird, thrush and robin who nest in the body of the hedge need small trees in the hedge to provide a perching post to sing and hold their territory. Birds do not sit on top of a flat topped hedge. While one thorn tree in 300 m may appear low, it is better to allow another new thorn develop in future years, giving a diversity of height and structure with developing thorn trees at different stages rather than all one height. Option 1 is automatically attained in ‘escaped’ or ‘relict’ hedges or lines of tree which are never topped contain numerous thorn trees with a full canopy proving flowers and fruit. Annual side trimming – little and often is allowed in Option 1.

The second option is to cut hedges on a three year cycle where it is recommended to cut one third of hedges each year to benefit the environment as much as possible. So where all hedges were cut in 2019, cut one-third in each of 2020, 2021 and 2022.

Best practice for biodiversity on all farms is to have a variety of hedge types. This includes some escaped hedges which remain un-topped but can be side–trimmed, and some topped hedges, trimmed to a triangular profile from a wide base, cutting the growing point, except to retain occasional trees including thorns at irregular intervals.

Hedges can be cut from 1 September until the end of February. The Wildlife Act, 1976 (2000) prohibits hedge cutting during the bird nesting season. Under Cross Compliance, the following question is asked for Good Agricultural and Environmental Conditions 7B 'Is there evidence of the cutting of hedges and / or trees during the bird nesting and breeding season (1 March – 31 August)'?

Under Cross Compliance hedges and drains have been designated as landscape features. Since 2009, they cannot be removed / piped and closed in unless a replacement hedge / drain of similar length is planted / dug at a suitable location on the holding in advance of the removal of the hedge or drain. If farmers have removed hedges since 2009, they can be penalised any stage. To avoid a penalty they should have replaced any removed hedges.

With the greater emphasis on biodiversity including hedges, the preferred option is not to remove hedges in the first place. Where, in exceptional circumstances, it is necessary to remove a hedge, line of trees or fill in a drain for good reasons such as farmyard expansion, farmers may do so provided a new hedge, line of trees or drain of equal length and like for like i.e. a hedgerow is replaced with a hedgerow comprising of traditional hedgerow species is planted or dug in advance of the removal of the old hedge, line of trees or drain. Hedge species used must be traditional to the area and cannot include amenity species such as laurel or conifers. Ornamental hedges around a house site will not suffice as a replacement hedge. New hedge must contain native species anything else wouldn’t be traditional to the area. A hedge or line of trees planted in front of another hedge or planting a line or grove of trees, is not considered a suitable replacement.

Failure to abide by these rules will result in a Cross Compliance penalty. Where it has been detected that a landscape feature has been removed/damaged in previous years, a sanction may be applied in the current year i.e. the year of the finding. In addition to the application of the sanction, a new hedge, line of trees or drain of equal length to the feature removed, must be planted or dug within twelve months. Otherwise a further cross compliance sanction will be applied.

Since 2011, farmers must apply to the Department of Agriculture, Food and the Marine for permission to remove hedges if the proposed newly created field will be over 5 hectares or if proposing to remove more than 500 metres.

To see all of the activity of Hedgerow Week follow this link  https://www.teagasc.ie/environment/biodiversity--countryside/farmland-habitats/hedgerows/