How birds use hedges


Of the 110 species regularly recorded in the Countryside Bird Survey in Ireland during the breeding season, 55 use hedges. Of these, 35 bird species nest in hedges. How birds use hedges is discussed here by Catherine Keena Teagasc Countryside Management Specialist and Niall Hatch BirdWatch Ireland

The 35 bird species nest in hedges that have enough cover from predators both overhead and on the ground. Hedges also provide food, shelter, song posts, perching posts and corridors along which birds can move.

A great many species of birds nest in hedges. They make up one of the most vital habitats that we have. A very good example is the dunnock, a common bird in Ireland, which used to be known as the hedge sparrow and for good reason because it really does love hedges. They love the security of them, they like to nest in behind thorns and brambles so they feel secure from predators like foxes, cats, hawks, squirrels and rats who find it difficult to get in there.

Another bird that uses hedges to nest is the wren, one of our most common birds – there are more wrens in Ireland than human beings. They tend to nest quite deep down, building a ball of a nest tucked away in the vegetation. They are really hard to locate and it is very difficult for surveyors to find their nests; individuals are usually located by listening to males singing on their breeding territories.

The blackbird one of our most common bird species, seen all over the country. They use hedges to nest in because of the great protection they provide with lots of food and shelter. They know they will be able to get the worms just below the hedges which means they don’t need to travel very far to find food. The same goes for the song thrush, which is, just like the blackbird, another member of the thrush family, though a bit shyer. They like cover more than the blackbird does. Their lives revolve around snails. They want to be in an area where they know snails are going to seek shelter. Hedges are perfect for that too. They can tuck their nest in, hidden from predators and they can get on with their lives.

Also some birds like house sparrows use hedges as conduits to get from A to B. They nest in and around them but also use them to connect up nesting areas. So if hedges are removed, isolating populations of birds with no genetic interflow between them, inbreeding happens, genetic diseases creep in and the population suffers and dwindles. Hedges keep nesting areas connected. So hedges are vital to nest in and to get to and from different nesting areas.

Ireland’s hedges are a vital source of food for so many different species of birds, because they support so many different kinds of life. Berries the most obvious, such as such a haws and rose hips. Blackberries on brambles are a real lifeline for birds in autumn. Robins love the elderberries and blackcaps rely on ivy berries.

Insects are attracted to plants in hedges. In particular, many species of butterfly lay their egg on the leaves, which then hatch out into caterpillars and in turn become food for blue tits, great tits and coal tits. The goldcrest, which is Ireland’s smallest bird, weighing just over 5g, less that the weight of a 20 cent coin. They spend their lives trying to glean small flies, spiders and other invertebrates from the underside of leaves. 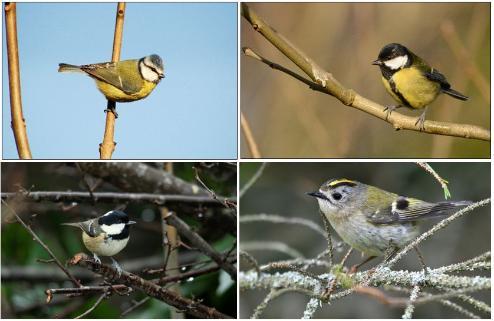 Birds feed on worms, slugs and snails that shelter under hedges where there is a certain micro climate – it is sheltered from the wind, it can be wet and damp. Earthworms come to the surface there. Blackbirds eat the worms and songthrush eat the snails.

Sparrowhawks come to feed on the blue tits, wrens, robins and other small birds - part of the cycle of life. Barn owls use hedges as a very important conduit when hunting, flying along the edges of them looking for wood mice and pygmy shrews sheltering below. Kestrels hover alongside hedges waiting for a mouse to dash out from cover. Buzzards use hedges as vantage points to find rabbits at the edges.

The structure of hedges is very important from a bird’s perspective. Some birds want to shelter and hide away from the elements, while other birds want to be seen, especially during the breeding season. Male blackbirds sing from the top of a hedgerow, using it as a song perch, and they want to be seen because they want to proclaim a territory. Very often those hedges delineate the lines and edges of that territory. So territories are often divided up on the basis of where hedges are. That works very well for them.

Even for some birds not normally associated with them, hedges play a very important role in their lives. Sedge warblers, which normally nest inside reed beds and in dense grassland, use the tops of hedges as song posts, from where they perform song flights and then duck back into cover before predators come. Common whitethroats do exactly the same thing.

As well as using song-posts in hedges, birds perch on the top of hedges for many different reasons. Sometimes it is to keep watch over their territories, sometimes they are watching out for predators, keeping an eye out for danger while their vulnerable chicks and maybe their partner are in a nest below them. Other times they are looking out for food. Sparrowhawks and buzzards perch on top of hedges, scanning the countryside with their keen eyesight, looking for any small rodents or birds they can feed on. Hedges proves a really good perch for them where they are secure from predators, can see danger coming and where nothing can really get to them.

It’s not only the hedges themselves that are so important, it’s the trees growing above them. The body of the hedge acts like an understory below them, mimicking what happens in a woodland. Mistle thrushes like to nest in tall trees, and love to have a hedge below them where they can find food and shelter and where they know their chicks will be able to find berries in autumn after they fledge from the nest.

Finch species, such as chaffinch, goldfinch and greenfinch, will often nest in trees in hedges, such as willow, hazel or alder. They use the hedges as a larder, as shelter for their chicks and as a well-protected nest site. So there are many different species that use not just the hedges but the trees that grow around them. 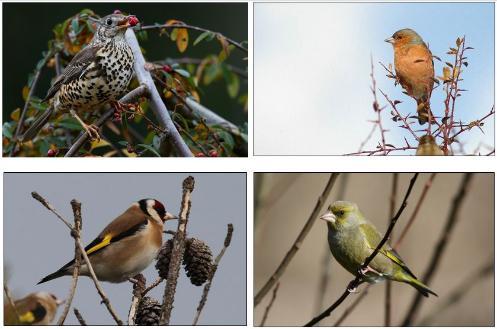 There are quite a few rare bird species that depend on hedges. Yellowhammers nest is hedges, once very common, sadly this bird has declined greatly in Ireland. The twite is a little finch, which now only breeds in the north-west of Ireland, often in marginal areas, and it greatly depends on hedges. It is the only Irish member of the finch family that is vegetarian for its whole life. Most finches are vegetarian as adults but feed insect larvae to their chicks, The twite needs to find vegetable matter for its chicks all the way through the breeding season. Traditional Irish hedges provide exactly what it needs. Sadly the twite is a bird species that has declined dramatically, and hedges are essential for its survival.

To see all of the activity of Hedgerow Week follow this link https://www.teagasc.ie/environment/biodiversity--countryside/farmland-habitats/hedgerows/