In 2019, Kildalton College planted in excess of 400m of new native hedges and it is planned to plant similar amounts over the next five years. Catherine Keena, Countryside Management Specialist, Francis Quigley Machinery Specialist and Tim Ashmore, Principal Kildalton College give the details

(Photo above: Hedge in Kildalton College planted in 2006)

Practical experience gained from planting new hedges in Kildalton College from 2004 -2006 had led to the development of Teagasc Best Practice advice on the growing of new hedges. Alternative plant species, spacings and management techniques were evaluated and demonstrated to farmers and advisors over the past fifteen years. 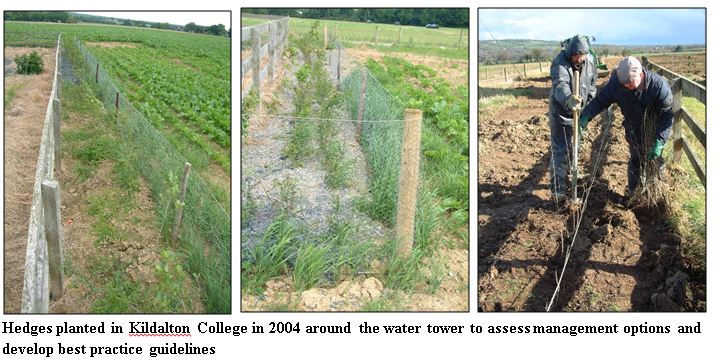 Key requirements for hedges to be fit for birds and bees are: a dense base with sufficient height for nesting birds; and the presence of flowering thorn trees for bees.

Achieving a dense base

In order to achieve a dense base, hedging plants are pruned to within an inch (30mm) or so of ground level after planting, and used silage plastic pushed over the cut stumps. A number of new shoots sprout immediately below the cut, generating 5 stems instead of one. After one year’s growth these new stems have grown half a metre, so in their first winter, a second cut is made to the 5 stems an inch (30mm) or so above the first cut, multiplying the number of stems from 5 to 25. Again, in their second winter after two year’s growth, a third cut is made. It is not a race to the top. We want the growth at ground level, so the hedge is let slowly inch its way up. After a few years of hand pruning or strimming, the hedge cutter can be used. It is critical to shape the hedge to a triangular profile from a wide base, cutting the growing point every year except for the occasional thorn trees which were identified at planting, protected with a tree guard and retained within the hedge to provide flowers and fruit in abundance when the trees matured. After a few years, the fence was removed facilitating gentle annual cutting, always slightly above the previous cut (little and often) maintains a dense stock-proof hedge.

To see all of the activity of Hedgerow Week follow this link  https://www.teagasc.ie/environment/biodiversity--countryside/farmland-habitats/hedgerows/