The regulated closed period for spreading organic manures is often a source of frustration and annoyance for farmers. This is not surprising given the cost of manure storage and variation in Irish weather. Edward Burgess, Teagasc explains the research supporting the closed period restrictions

Edward Burgess, Catchment Science Specialist explains that dry periods with relatively good ground conditions can occur during the closed period, followed by heavy rainfall and wet soils just as the date arrives allowing slurry spreading to take place.  This naturally causes people to question the logic behind such “calendar” based decisions. He goes on to demonstrate that....

The results of 4 years research by the ACP investigating the seasonality of nutrient loss to rivers in five catchments is summarised here, and support the restriction of manure application during the closed period. 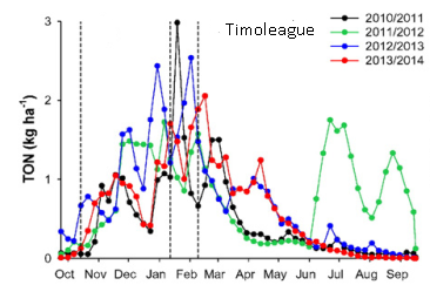 Fig. 2.    Weekly Nitrate loss over four years.  The dotted black lines (-------) represent the closed period beginning and end dates as well as the adjacent for week period before and after.

View this information here as a pdf:  Nutrient Loss and the Closed Period for Spreading Manure