Main Photo above: Prune all other plants except holly down to an inch or so above ground level with a sloping cut to leave a sharp point 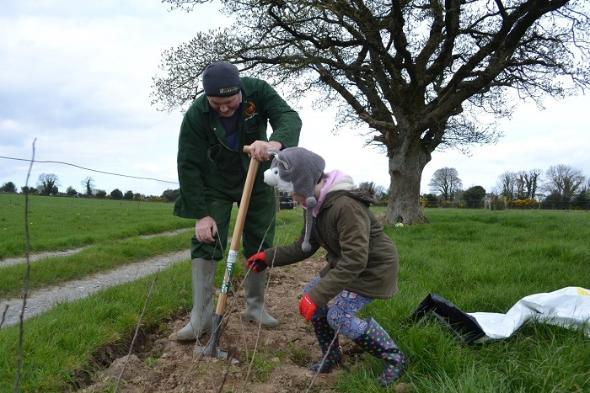 New hedges are a valuable asset on a farm, leaving a positive legacy for the next generation

Which type of hedge?

When thinking of planting a new hedge, you must first decide if you want a hedge with a dense base that will be regularly topped OR if you want a line of trees that will never be topped.

There are two distinct hedge types in Ireland. Both types are good, but each requires totally different management. A lack of understanding of each hedge type leads to inappropriate management and damage to hedges. Ideally each farm should have both types of hedges present – to maximise biodiversity benefits. 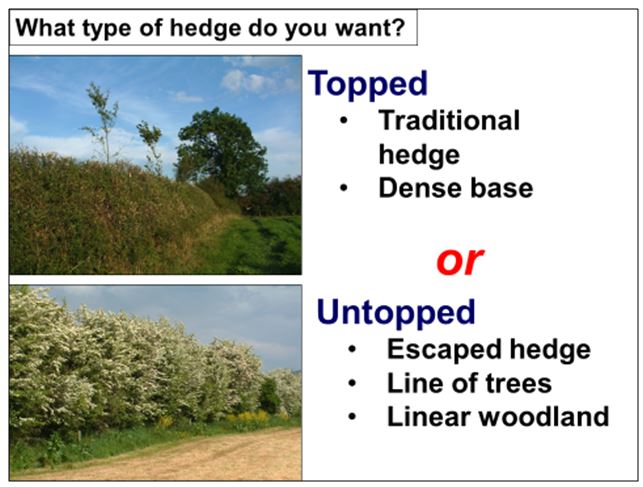 Do not top an escaped hedge and do not let a topped hedge escape!

Before you plant a hedge it is essential to understand how trees and shrubs grow. The leader or central shoot of a tree is destined to grow up, causing the tree to develop into a single bole bole stem with a canopy. This occurs because of apical dominance which is the phenomenon whereby the main, central stem of the plant is dominant over other side stems. When apical dominance is broken by or pruning, lateral and dormant buds just below the cut fight to become the new terminal leader. Hedges are managed habitats and need management to be maintained 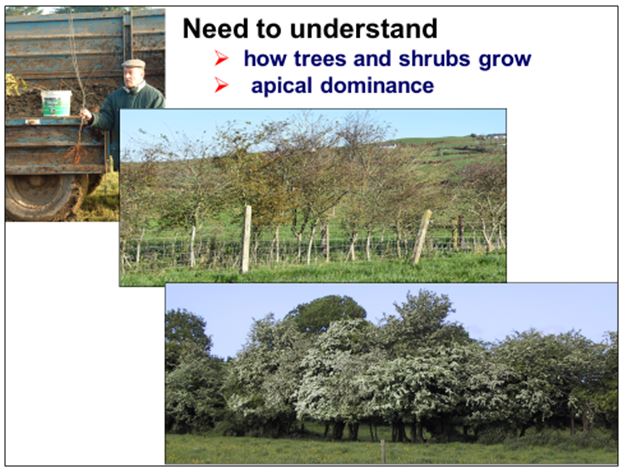 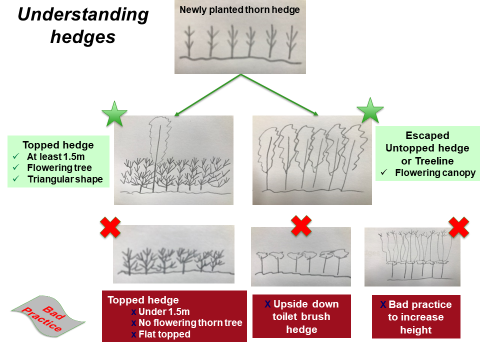 Plant native species of native Irish provenance. This means the plants were grown in Ireland from seed collected from Irish trees. Species native to Ireland grown in another country from their seed act differently. Native Irish species are in tune with each other with timing of flowering suiting associated dependent species. Using native provenance hedging stock is better for biodiversity, reduces the health risk to our native trees and hedges. It also supports local rural development.

Trees and shrubs that tolerate or thrive with trimming such as the thorn species – whitethorn, blackthorn and holly are excellent for the structure in hedges and should be the basis for all farm hedges. Such species are the only ones recommended in topped hedges as they are also ideal to provide the occasional mature tree within the hedge without shading out and causing gaps as is common with larger hedgerow trees.

For a topped hedge - Buy 2 year old bare rooted whips, 6 plants per m, mainly whitethorn, but once every 2 m replace one with another hedging species that tolerates trimming such as Blackthorn, Holly, Hazel, Spindle, Guelder Rose, Dog Rose and Woodbine.Therefore for every 100 m of new hedge - buy 550 whitethorn and 50 other species 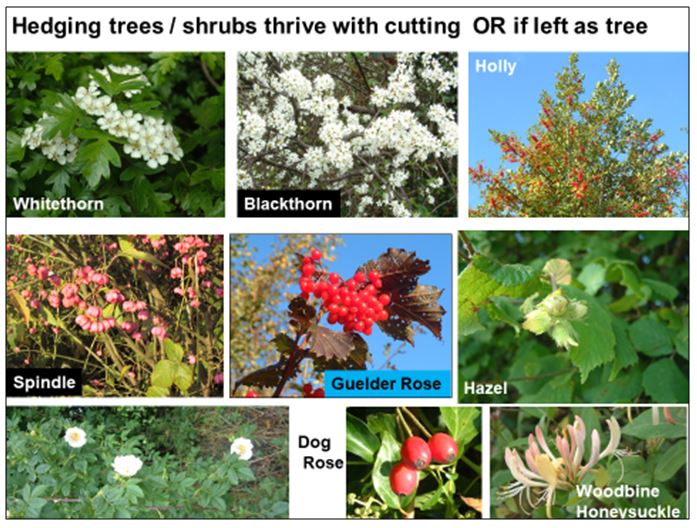 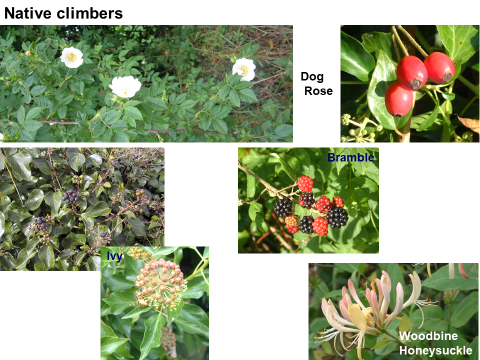 The escaped or untopped hedge or treeline can contain any of Ireland’s native trees. Large trees are commonly found in our hedges and can be planted in new hedges provided the site is suited to their height when mature. Mid-sized trees may be more suited. Remember – any of these trees must not be topped any stage or it will destroy the hedge and the tree.

Within the Topped hedge, because it is important to allow occasional plants of each of the hedging species such as whitethorn to mature into a hedgerow tree – there may be no need to include additional trees. Frequently where a lot of tree species are included in a new hedge mix, many are subsequently topped and destroyed, and it is also likely that no whitethorn trees are allowed to grow up. 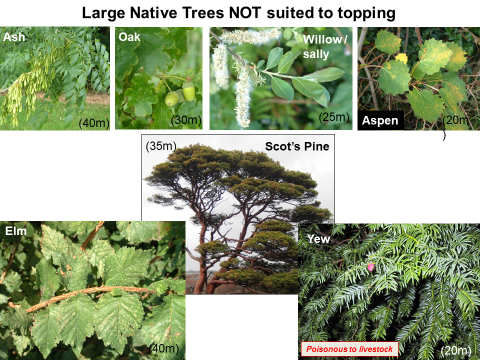 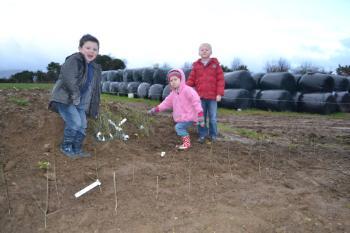 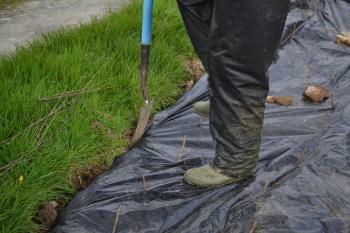 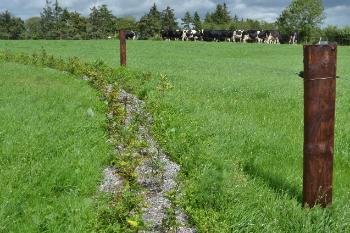 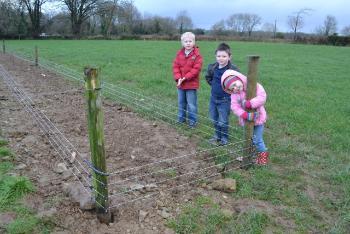 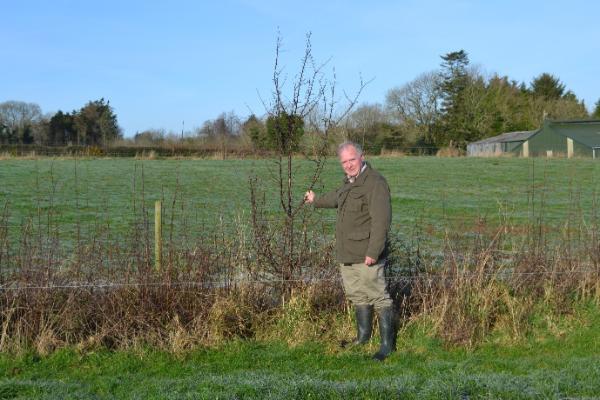 Where plants were pruned immediately after planting down to an inch or so above ground level with a sloping cut to leave a sharp point and pushing a strip of compostable film or used silage plastic down neatly over the cut stumps, new sprouts will have appeared just below the cut stump resulting in approximately 5 stems growing up instead of one. During the first growing season, these 5 stems will grow up maybe a half a metre. The next step is to carry out a second pruning after the first growing season during the dormant season in winter. This involves cutting each of the 5 stems back down to within an inch or so above the previous cut, which will result in the multiplication of the 5 stems into 25 stems close to the ground where we want the dense growth. With a new hedge, it is not a race to the top, but rather letting it inch its way up year by year. At planting, a number of thorn saplings should have never been identified for retention as trees and should have been protected with a tree guard and left uncut. It is important to look out for these future thorn trees at second pruning and again leave them uncut. 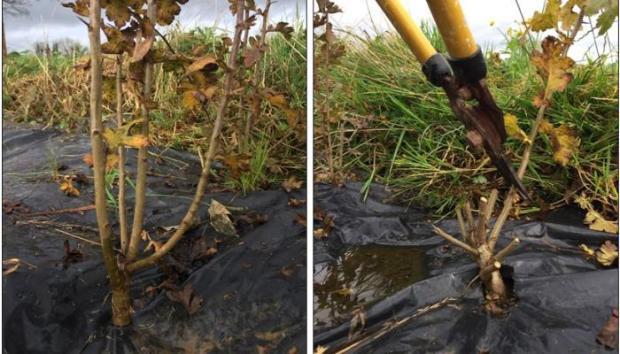 Left above: New hedge sapling cut at planting showing how shoots sprouted just beneath the cut and grew up during the first growing season

Find out more about the series here: Sustainable Agriculture Webinars