The Role of The Irish Ramsar Wetlands Committee

The committee was established in 2010. This national committee comprises members drawn from a variety of relevant government agencies, scientific and technical institutions, regional and local authorities and non-governmental organisations.

Its principal objective is to promote the wise use and protection of wetlands in Ireland.

For the very first time, World Wetlands Day will be officially observed within the context of the United Nations — as the UN General Assembly recently adopted it as an international day. This year’s theme for World Wetlands Day is “Wetlands Action for People and Nature”

A call to take action for wetlands is the focus of this years’ campaign. It’s an appeal to invest financial, human and political capital to save the world’s wetlands from disappearing and to restore those we have degraded. Nearly 90% of the world’s wetlands have been degraded since the 1700s. Wetlands are disappearing three times faster than forests and are Earth’s most threatened ecosystem. Yet, wetlands are critically important ecosystems that contribute to biodiversity, climate mitigation and adaptation, freshwater availability, world economies and more. 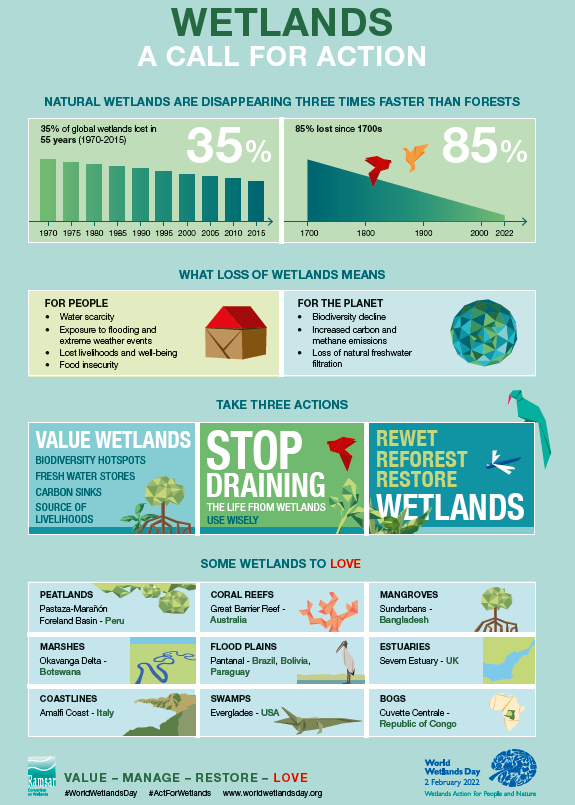 Approximately one- quarter of the total area of Ireland is water, comprising a broad diversity of wetlands. With its ample rainfall supply, the island hosts an abundance of freshwater wetlands such as marshes, fens, bogs, rivers, lakes, ponds. Some, such as our peatlands and turloughs, are uniquely different to others in the world. The biodiversity of wetlands in Ireland has been estimated to be worth €385 million per year to the Irish economy and wetlands also contribute a component of the €330 million nature and eco-tourism value of Irish habitats.

Threats to our Wetlands

However many of our wetlands are under threat from

Ireland’s wetlands are a vital component of the water cycle, acting as sponges, retaining large quantities of water during periods of high rainfall and slowly releasing this in drier times. By doing this our wetlands provide protection from flooding and storms. Our wetlands store 30% of land-based carbon which is vital for climate change mitigation. You will also find 40% of all species either live or breed in wetlands. As many of our naturally occurring wetlands occur on farmland it is clear that farmers play a key role in conservation and “wise use of wetlands” so that these unique areas exist and continue to be enjoyed by future generations. So this year for world wetlands day on 2nd February we want to encourage people to get out for a walk in their own locality and appreciate the vast array and beauty of our wetlands and realise how lucky we are to have them. There will also be more formally organised events for people to attend across the country if they wish.

If you would like to read more about our wetlands you might like this article The Importance of Wetlands also written by Mary Roache. You can read more about wetlands and the Ramsar sites in the Irish Wetlands Guide here and you can read the Teagasc Farming and wetlands leaflet here (PDF)