Freshwater pearl mussels are extremely long lived and are capable of surviving for up to 140 years.This makes them Ireland’s longest living animal. 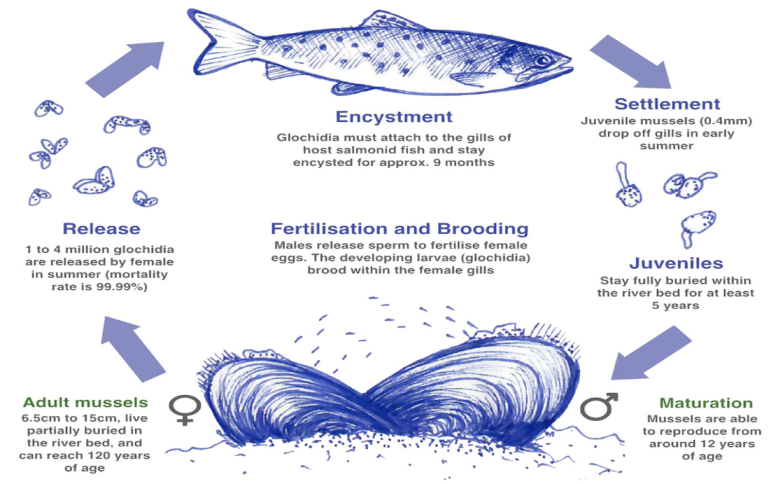 The main reason for decline is the low survival rate of juvenile mussels, which are extremely sensitive to slight changes in environmental conditions. This is leading to an ageing population, not capable of replenishing itself. Juvenile survival is dependent on a clean, well oxygenated river bed, with little silt, sediment, or algal growth.

The Pearl Mussel Project are currently working with over 450 farmers throughout the Top 8 Catchments. With the help trained farm advisors the project assesses each farm annually using habitat and whole-farm scorecards. Farmers are financially rewarded according the scores achieved. Through this results-based payment approach farmers are incentivised to improve the habitat condition and water quality throughout their farms. Ultimately the project pays farmers to produce clean water and the delivery of other benefits to biodiversity and climate.

The main agricultural pressures to water courses within the top 8 catchments include:

The Pearl Mussel project encourages farmers to manage their habitats for the benefit of water, carbon, and biodiversity. A major part of the programme involves raising awareness amongst participant farmers through ongoing training and engagement.