Goats don’t like the rain. Marion Roeleveld, Killeen Farmhouse Cheese had goats out grazing, but when it rained they would run back into the shed. They were very bad grazers and very susceptible to parasites. Anne Kinsella, Teagasc Rural Economy, brings us this insight into making goat's cheese

At the heart of Killeen Farmhouse Cheese are the 200 goats who supply the milk from which this multi award-winning cheese is made on the farm near Portumna in south Galway. All the grass and silage on which the goats feed is grown here, supplemented by meal mixed on-site, containing beans, peas, beet pulp and oats

“We know exactly what they are eating and what goes into the cheese,” says farmer and cheesemaker Marion Roeleveld from the Netherlands. “We operate a zero-grazing system. Goats don’t like the rain. We used to have them out grazing, but when it rained they would run back into the shed. That made them very bad grazers and on top of that they were also very susceptible to parasites. We had to feed them additional concentrates, which proved very costly. Indoors the goats are healthier and they produce more milk.” The goats get 1kg of meal along with fresh grass, out of that they produce 3.5l of milk per day. 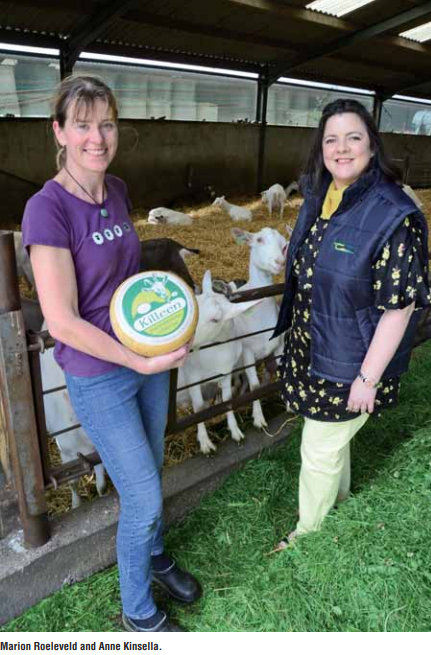 Marion, one of four siblings, grew up on a dairy farm just south of Amsterdam. She had worked on a cheese farm in the Netherlands for seven years while at second level and in college. Marion met Haske, her now business partner, through a mutual friend in 1990. Setting up a cheesemaking business formed the basis of their early discussions. Marion came to join Haske in Ireland in 2001. After attending agricultural college in the Netherlands, Haske had moved to Ireland in 1990 when he was just 18, starting his dairy goat enterprise with 20 goats on eight acres. In 2007 he bought additional land at the “height of the boom”. The farm now extends to 50 acres. Dairy goat production is unpredictable, says Marion: “At the time the market for goats’ milk was extremely bad. On some occasions we could not sell the milk and had to dispose of it.” To grow the business and maintain a steadier income, they thought it safer to make cheese. From her previous work experience, Marion knew how to set up a cheese plant. In those early days, although Marion already had a good knowledge of cheese-making, she consulted Eddie O Neill, artisan food specialist at Teagasc. “His advice was most helpful,” she says. Marion also references a cheesemaking course which one of her staff attended a number of years previous at Teagasc, Moorepark. Participants gained “a complete overview of how to make cheese, including the hygiene aspect, which was very useful and practical”. A further advantage of the course, Marion cites, is that as part of her HACCP plan she needs to prove that staff are completing such training.  “Documenting that they have attended such relevant training is most important.”

Cheese-making began at Killeen in 2004. At first only some of the milk produced on the farm was used. Now all of it goes into cheese. The cheese at Killeen is semi-hard, made from pasteurised goat’s milk. It’s aged for two months, with cheese wheels weighing around 5kg, available in plain or fenugreek. “All Killeen cheeses are made with traditional rennet, as it ensures the best quality,” says Marion.

An inspector from the Department of Agriculture, Food and the Marine inspects the cheese production unit every two months and takes samples of the cheese. It is a very rigorous process. Irish standards are very high and this is certainly good for the cheese business. Her cheese storage area has reached capacity, so Marion cannot produce much more than she is currently making. The cheese is certainly in demand but she feels goats’ cheese would be even more popular if people were a bit more adventurous. A recent media post in the UK hailed Killeen as the standout winner in a taste test, it said of the Galway cheese “a smooth and creamy cheese”; “if you think you don’t like goats’ cheese you have to try this.”

Haske has been predominantly the farm manager, while Marion is in charge of the cheese production unit. This is how it has been since the beginnings in 2004. “We fall in and out of the various roles assisting on both sides of the house, as required,” says Marion. In 2019 Haske was recovering from orthopaedic surgery, so Marion was running both the farm and the cheese unit with assistance from staff. "I believe that I have been afforded the same opportunities in life as anyone, male or female", says Marion. “As I was saying to my sister recently, to me there is no difference in being a woman. I can do the same as anyone, or hopefully even better.”