Is rural Ireland really dying? What the facts and figures tell us


The question of whether rural Ireland is dying or not, is complicated, and requires nuanced geographic analysis. This article By Josh O'Driscoll, Frank Crowley, Justin Doran, Mary O'Shaughnessy, UCC; David Meredith and Jesko Zimmermann, Teagasc first appeared on RTÉ Brainstorm

In Ireland, there is a common narrative that rural Ireland is dying. One key measure that can be used to assess rural decline is population. The famine saw Ireland's population drastically fall in the 1840s. Similarly, repeated recessions had an impact on outward migration.

A perception that rural areas are in decline

Collectively, these events have given rise to a perception that rural areas, in particular, are persistently weak, disadvantaged and declining. Challenging this perception are the preliminary results from the 2022 Census of Population, which shows that Ireland’s population continues to grow. According to the results, Ireland’s population stands at 5,123,536, the highest since 1851. Overall, the rural population grew by 374,714 or 2% since 2016. This result, which is part of a long run trend of rural population increase, prompts the question 'is rural Ireland really dying?’

Population loss is an international concern and shrinking regions are defined as areas losing a significant proportion of their population over a period greater than or equal to one generation (20 to 30 years). We applied this definition in a paper published in the Journal of Maps in March 2022.

With the release of the preliminary results of the 2022 Census of Population, we replicate the analysis to understand population changes since 2016 at the Electoral Division (ED) level. From both a social and economic point of view, this period was defined by the impacts of Covid-19 in terms of restrictions on movement and working from home, which became widespread and often necessary for large sections of the labour force.

By thinking of all 'rural' areas as the exact same, we fail to capture the spatial nuances of population change

Many quickly imagined how urban and rural life will be changed forever, with some predicting people will have a strong preference to live in more isolated areas, and that remote working may be the remedy for regional towns. The events were identified as an opportunity by Irish policymakers to try revive regional and peripherally located towns. 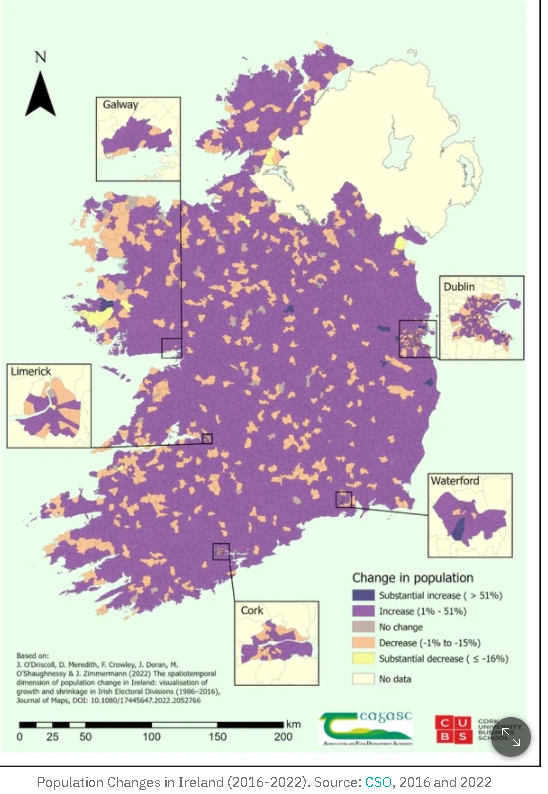 The map above shows that population loss since 2016 is predominately concentrated in the west and midlands of Ireland. Many of these areas are peripherally located from towns and cities and are rural based. Population loss is less common or intense than between previous censuses, though the overall patterns remain similar. Whilst the story is often portrayed as a peripheral rural only decline, population loss is also a feature of Irish cities. Meanwhile, the majority of EDs experience population increases, with few substantial increases.

With the trend from 2016 to 2022 visualised, it begs the questions on what impact these results have on the overall trends. Firstly, we examined the changes in the total number of EDs in each category. 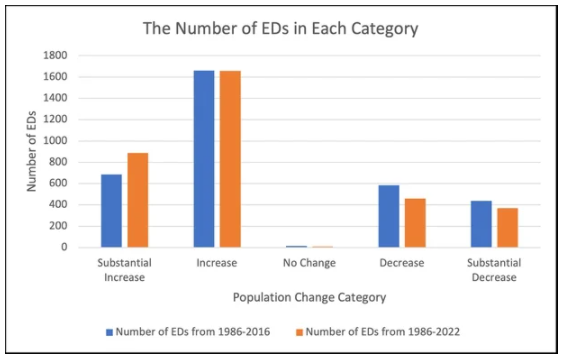 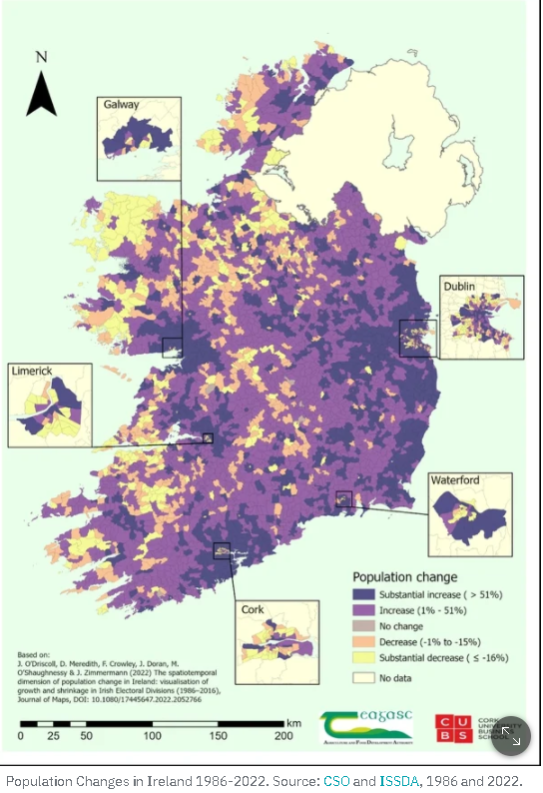 So, is rural Ireland dying?

The 1986 to 2022 map shows similar patterns to our previous maps. Rural areas, particularly remote and peripheral areas in the midlands and the west, have been experiencing consistent population loss. Urban areas, too, have experience population loss, demonstrating it is not just a rural issue. But there are also many rural areas, especially surrounding the cities, which are gaining population.

The other feature evident in the maps is that areas losing population are generally clustered together. This is important as it indicates that spatially targeting supports at these clusters could be an effective means of dealing with some of the issues communities in these areas are facing.

Before such policies are developed a fundamental question needs to be answered: what is the objective of any such policy? Is it to reverse population decline by encouraging people to move to these locations or is it to sustain or improve the quality of life of the people living in these places?

There are policies currently in place, such as Project Ireland 2040 and Our Rural Future that seek to achieve both of these outcomes. Arguably, by not having place specific targets, there is a risk that available resources are spread too thinly or allocated to places that do not have the greatest needs.

We need to ensure that an appropriate spatial scale is used in future to inform policies, particularly those directed at peripheral and rural areas. The question of whether rural Ireland is dying or not, is complicated, and requires nuanced geographic analysis than general province, county, administrative regions, or even urban/rural splits allow for.

By thinking of all 'rural' areas as the exact same, we fail to capture the spatial nuances of population change. Equally, we need to avoid failing to see the wood for the trees by focusing on too large a spatial scale, eg using townland or Electoral Division data to get a more detailed perspective. Previous research has shown that the scale of analysis is key when examining population loss. If we want effective solutions, we need to start using appropriate scales of analysis.

Dr David Meredith is a Senior Research Officer at the Rural Economy Development Programme at Teagasc. He is an Irish Research Council awardee.

Dr Jesko Zimmermann is a Data Technologist in the Agrifood Business and Spatial Analysis Department at Teagasc.