Domestically, the Irish Government is now focused on securing 70% of all electricity from renewables by 2030. In 2019, wind energy provided 32.5% of our electricity. Barry Caslin, Teagasc, Rural Economy and Development Programme has more Wind Energy information here in this factsheet 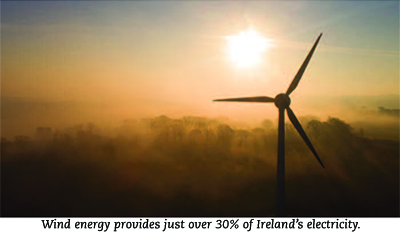 Domestically, the Irish Government is now focused on securing 70% of all electricity from renewables by 2030. In 2019, wind energy provided 32.5% of our electricity. The Republic of Ireland now has 4,130MW of installed wind capacity. There were 24 new wind farms built in 2019, which provided an additional 463MW of wind capacity.

Wind energy is a natural resource generated from temperature differences caused by the sun and converted to electrical energy by turbines. The energy produced replaces that generated from fossil fuels, which release greenhouse gases (GHG) as they burn. A small-scale commercial wind turbine of 800kW supplying electricity to the grid can save in the region of 1,000 tonnes of CO2 per year compared to generating the electricity in a conventional power station.

Energy is needed to create and install the turbines; however, this is typically replaced within the first three months of use. For the rest of the life of the turbine (around 20-30 years), power will be produced sustainably. Many farmers are being approached by wind developers as to leasing a site for wind energy generation. Although not for the faint hearted, other landowners are contemplating developing their own wind farm.

An 800kW turbine is one of the smallest commercial turbines on the market and would be considered the smallest viable development using new equipment and exporting to the grid. Smaller units tend to make more sense where there is a large load on site, and also where owner is satisfied to use secondhand equipment.

Expert advice should be sought early on in assessing site suitability, this may save a lot of surprises down the road. If the answers to the following questions are encouraging, then a site may be worth evaluating more closely:

The Renewable Electricity Support Scheme (RESS) will provide financial support to renewable electricity projects in the Republic of Ireland. It is a pivotal component of the National Energy and Climate Plan and is essential for achieving Ireland's 70% renewable electricity target by 2030. RESS auctions will be held to offer 15-year fixed-price power off-take contracts. An increasing number of wind projects are also being built outside of RESS, using corporate PPA.

The project costs involved for each 800kW turbine are around €1.8m to €2m fully installed, though could be higher if a reasonably priced connection to the grid is not available. Grid connection can itself cost in excess of €1m. A high grid connection charge usually means that more turbines have to be installed to spread the cost. The cost of all the preparatory work can be high, for a single medium-scale turbine this could be in the region of €80k.

At any point in the process toward planning consent, extra expenditure may be required and if consent is not granted, all costs incurred will be lost. An alternative is to allow an external developer to take the risks in exchange for an annual land rental. Income from this varies depending on the particular deal, but is likely to be less than 5% of the revenue generated by the turbine.

Wind energy is currently one of the more accessible ways of generating renewable electricity for those with a suitable land holding. In Ireland, the average wind speeds are generally high compared to mainland Europe and in exposed locations, especially further north, wind speed can be significantly above 7m/s at turbine hub height, which is normally the minimum speed required for economic development.

Modern turbines are highly complex machines that use computer control systems to keep the rotor facing into the wind. The power available from the wind increases greatly as its speed does, and because wind speed increases with distance from the ground, a higher tower and larger diameter rotor will improve output. A medium-sized commercial scale turbine for a farm in Ireland may have a tower height of 50m and a rotor diameter of 48m, giving a tip height of 74m, and a rated power output of 800kW.

The wind industry is moving to larger turbines; for example, a turbine rated at 2.3MW could be on a tower of around 60m and have a rotor of 80m in diameter. One unit therefore produces almost as much as three smaller turbines. This may suit the landscape better. 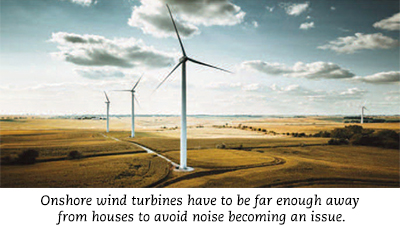 Onshore wind turbines are commonly installed on farmland or forestry areas because they have to be far enough away from houses to avoid noise becoming an issue. In an area with a good wind speed, a turbine can generate a sizeable income for the developer. 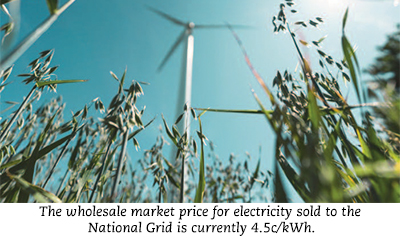 An 800kW turbine working at rated output would generate 7 million kWh per year if the wind blows continuously at the speed required to give the rated output.

Obviously, this will not always happen. The actual output would normally be in the order of 30% of the theoretical maximum. The wind allows the turbine to produce its rated output over 30% of the year, giving 2.1 million kWh for the 800kW machine per year.

Assuming the energy generated can be sold to the National Grid for a wholesale market price of around 4.5c/kWh, and for example purposes, if we assume the income from RESS (from the consumer via PSO levy) was about 3c/kWh, the total income will be around €157,500 per turbine per year. Greater savings will be possible where power is used onsite to offset imported energy. RESS auctions are subject to change and are designed to encourage renewable developments with community involvement.

Q. Can wind power ever be efficient if only 30% of the theoretical output is actually achieved?
A. Annual output is the important measure of a wind turbine. Like most harvesting machines they only operate when there is a crop to harvest.
Conventional power stations have a low capacity factor when the energy cost of extracting the fuel from the ground, converting it to electricity and removing the waste heat via cooling towers is considered.

Q. How will the National Grid cope if there is no wind across the country?
A. Currently, the system has to cope when a power station breaks down, so extra capacity already exists. If the proportion of wind energy production greatly increases, then more power storage systems will be needed.

Q. My local wind farm often has some turbines not working even when the wind is blowing hard – why is this?
A. Grid capacity is often limited so wind farms may install more turbines than the grid can cope with in times of strong wind, and only use all when the wind is relatively light.