The Production of Ice Cream


Since the turn of the century and the development of the ice cream cone, the worldwide growth in consumption has been phenomenal, with over 12 billion litres of ice cream consumed each year in the USA and China alone. The Teagasc Food Industry Development Department have more information.

For most people, the phrase ice cream  conjures up memories of warm summers, slurping melted cones, banana  splits,  hot fudge sundaes, or buying a 99 cone from the local shop. Ice cream is the ultimate old- fashioned treat. This dessert has a history that stretches across the globe, with different countries enjoying various versions  such  as kulfi in India, gelato in Italy, and mochi in  Japan. It seems every country has its own spin on the delicious frozen confection that we call ice cream. 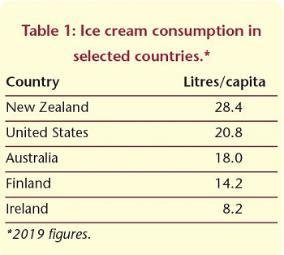 Since the turn of the century and the development of the ice cream cone, the worldwide growth in consumption has been phenomenal, with over 12 billion litres of ice cream consumed each year in the USA and China alone. The growth of low-fat, organic and dairy-free ice cream is changing the production landscape. Ice cream manufacturers are, in turn, seeking to maximise the nutritional benefits of the products they sell. Table 1 outlines the ice cream consumption in selected countries (litres/capita) in comparison to Ireland.

The production of ice cream involves mixing the ingredients together, followed by pasteurisation. It is then homogenised, a process that allows the distribution of fat  into as many separate small fat globules as possible. After homogenisation there is a cooling and ageing process. The mixture is left to age for 4-24 hours and during this time all the dry ingredients are hydrated and the fat is crystallised. The product is then frozen in a continuous freezer and air incorporation takes place. When the ice cream leaves the continuous freezer at -5˚C, approximately 50% of the water is frozen. The final process is hardening, which freezes out most of the water at -40˚C.

Ice cream is a complex product. Dairy ice cream contains milk fat, and other components, such as proteins and carbohydrates. Sweeteners, flavourings, emulsifiers and stabilisers are added during processing to enhance flavour, texture or appearance. Ice cream is over 50% water, from milk or other ingredients. Air is incorporated into the product, resulting in finely distributed air cells protected by a layer of fat globules.