Teagasc, in collaboration with Skogforsk, Sweden, were delighted to co-host a two-day workshop focused on ‘the propagation of Ash plant material tolerant to the dieback disease’ at the Ashtown Research Centre on 14th – 15th June, 2022. Dr Dheeraj Rathore provides some highlights from the event.

Dr Mateusz Liziniewicz, Skogforsk, Sweden, took the initiative to secure the funds from the Nordic Forest Research (SNS) networks to co-host the workshop with Teagasc in Ireland. Twenty eight participants representing academia, industry and government bodies such as Department of Agriculture, Food and the Marine (DAFM) attended the workshop. Delegates from six European countries presented their research on propagation techniques and breeding ash for dieback disease tolerance at the workshop. Mr John Spink, Head of Crops, Environment and Land Use Programme in Teagasc welcomed the delegates to Teagasc, and extended his support to the event. Each of the attendees introduced themselves and outlined their ongoing research projects on ash.

Dr Trevor Fenning from Forest Research, UK, gave the first oral presentation of the day on the “Stories from the tissue culture of Ash”. Dr Fenning highlighted the impact of ash dieback disease in UK, necessity of tissue culture techniques to develop true-to-type plant material and its role in breeding for disease tolerance. The aim of this work was to standardise tissue culture methods for propagating plant material from selected ash trees to produce rooted clonal plants to grow on in the nursery.

Grafting and budding of Ash

Mr Oliver Sheridan, Teagasc, gave a talk and practical demonstration on different types of grafting and budding techniques used for propagation of ash. Grafting is normally carried out during the dormant season (winter months), while budding is carried out during the summer months. Mr Sheridan outlined the importance of using good disease free rootstock and scion wood material for grafting. Preparation of the rootstock and scion prior to grafting was carried out. Three grafting techniques that can be used for ash; whip, whip and tongue, and a cleft graft were demonstrated using the prepared rootstocks and scion materials. Another form of grafting called budding was also explained followed by a practical demonstration. These methods of propagation are important for the clonal multiplication of selected ash genotypes for several downstream applications.

Visit to the Teagasc glasshouse facility, Marteloscope and Ash gene-bank in Oak Park

Delegates visited the glasshouse facility in the Teagasc, Ashtown Research Centre, where clones of selected ash genotypes are grown indoor for disease screening. Discussions on rooting softwood cuttings, compost medium and conditions to encourage rooting were discussed. In the afternoon at the Teagasc, Oak Park Research Centre, Carlow Dr Dheeraj Rathore, Teagasc, explained the work being done to propagate ash in order to conserve and breed for dieback disease tolerance in Ireland.

The delegates visited the indoor seed orchard of selected ash genotypes which are showing higher levels of tolerance to ash dieback disease and are producing seed for the first time. Delegates then visited the ash gene bank; a collection of tolerant ash genotypes from 16 different European countries including Ireland, planted with the aim to conserve this genetic material and to study their performance in field conditions. The discussions included selection of putatively tolerant genotypes to monitor for disease tolerance over next 3-5 years and include them in the breeding programme.

Ms Frances McHugh, Teagasc, took delegates to the Marteloscope; a specifically prepared plot, ranging from 0.4 – 1 hectare in size, within the forest in which tree measurements (DBH, height, etc.) and associated software are linked to provide a framework for in-forest training. Ms McHugh demonstrated the purpose of this resource in Ireland to forest owners / foresters / students and other interested groups as a training tool for selecting trees for thinning; from both an economic and ecological perspective.

An oral presentation by Dr Mateusz Liziniewicz, Skogforsk, Sweden, followed updating delegates about the improvement of forest reproductive material of ash; selection and testing resistance against the disease causing ash dieback. The research in Skogforsk include identifying healthy ash trees in Sweden, including these by grafting in the screening programme along with field trials in different locations. Dr Liziniewicz is also working on forward selection of ash genotypes by screening 2-3 years old seedlings for disease tolerance.

The day concluded with remarks from Prof Erik Kjaer, University of Copenhagen, Denmark. Prof Kjaer thanked all the presenters, demonstrators, moderators and the attendees for such a fruitful day. He added that the Ash research community is very small, and it is very important that we are open to collaborate, share both research and knowledge to enhance our work in the fight against ash dieback.

Research updates from Ash breeding programmes in other European Countries

“Breeding Fraxinus excelsior for reduced ash dieback in Denmark and deployment of the improved material” by Prof Erik Kjaer. Their Ash breeding programme for dieback disease tolerance is one of the most advanced in Europe, and perhaps around the world. They have two clonal seed orchards (CSO) and one seedling seed orchard (SSO) already established to produce tolerant ash seed material for commercial purposes. Prof Kjaer made key suggestions to the breeders working with a common aim of saving ash from dieback disease:

More information about the breeding programme at the University of Copenhagen can be found here.

Dr Pawel Przybylski, Forest Research Institute, Poland, presented their work on “Ash dieback research in Poland” where more than 85% mortality rate of ash trees has been recorded since the disease was first detected in the 1990’s. Dr Przybylski emphasised that bud burst/development is important for disease tolerance because early bud development leads to better growth of leaves and are damaged less by the fungal pathogen compared to genotypes with late bud development. This conclusion is based on the observations made during 2012 – 2016, which led to the association of phenological traits to phenotype from a multisite trial.

The morning session concluded with a presentation on “Accelerating natural selection for resistance to ash dieback” by Dr Elizabeth Orton, The John Innes Centre, UK. They have grafted clones of 120 accessions that were less susceptible to the dieback disease. The methods of propagation presented in Dr Orton’s talk included winter and summer cuttings using different peat/perlite mediums for rooting the cuttings, and air layering. Dr Orton mentioned about their DIVA (Diversity in Ash) collection; seeds taken from healthy ash trees which are now part of their screening and breeding programme and their elaborate scoring strategy with categories ranging from 1 to 10.

Visit to the Ash gene-bank and Phoenix Park in Dublin

Our second excursion was to the Phoenix Park; one of the largest enclosed public parks in any capital city in Europe. As part of this excursion, delegates visited another Teagasc ash gene-bank, established in 2021 with grafted clones, comprised of 165 genotypes to conserve this plant material and monitor their performance under field conditions. Delegates observed varying levels of tolerance, from no disease symptoms on some genotypes to very susceptible genotypes which almost died within first year of planting. This was followed by a walking tour of the Phoenix Park by Mr Cormac Downey, Office of Public Works, Ireland, who took our delegates through some of the interesting trails within the park, talking about some of the champion trees, our native tree species, wildlife, and history of the park, before finally arriving at the Phoenix Café for an outdoor lunch.

Discussions on other threats to Ash trees

The afternoon session focused on other threats to our ash trees, beginning with a presentation on “Pests and Pathogens of ash on the island of Ireland” by Ms Erika Soldi, Trinity College Dublin, Ireland. Ms Soldi took a two way approach: 1) horizon scan in the literature, and 2) visual observation of unhealthy trees to collect data and samples for molecular screening. From literature, Ms Soldi reported that there are around 7 fungal, 1 oomycetes, 2 bacterial and 6 insect species that are potential threats or opportunists to Fraxinus species. Following the visual identification and molecular screening, Ms Soldi found 4 pests; ash sawfly, leaf miner, mites, and beetles, and 7 other pathogens that cause cankers and rots on ash trees. Other major threats to ash highlighted by Ms Soldi include Emerald Ash borer, Verticillium dahlia (wilt causing ascomycetes), Phytoplasma fraxini (ash yellow disease causing bacteria), Ash rust and weevil agents. This presentation created awareness of other pests/pathogens that may become a major threat to ash due to increased globalisation and climate change.

The final presentation of the day was made by Dr Donnie Peterson, Swedish University of Agricultural Science, Sweden on “Emerald Ash Borer (EAB) in Europe”. Dr Peterson illustrated the devastation this pest has caused in North America leading to >$10 billion loss by killing over 100 million ash trees. According to the research, North American ash is very susceptible to this pest compared to Manchurian ash which shows resistance by deterring EAB females from laying eggs. Dr Peterson discussed a recent article on “Development of a Loop-Mediated Isothermal Amplification Assay as an Early-Warning Tool for Detecting Emerald Ash borer incursions”. Dr Peterson also showed some outputs on the impact of EAB on F. excelsior where:

He added that EAB has wide host range to include all ash spp., white fringe tree (Chionanthus virginicus), Olive (close relative of ash), and other Oleaceae spp., but not limited to these. Dr Peterson provided information on EAB parasitoids as top-down and bottom-up approaches for the suppression of EAB populations. These include Spathius polonicus, S. agrili, S. galinae and Tetrastichus planipennisi (larval parasitoids), Oobius agrili (egg parasitoids). Dr Peterson concluded his presentation with some positive potentials to breed for resistance to EAB by exploring areas of antibiosis (phenolic that reduce larval growth) and antixenosis (traits that influence behaviour of insects), and improving biocontrol agents.

Some ideas about the theme of the next workshop were proposed:

Teagasc is thankful to Nordic Forest Research (SNS) for funding, and Skogforsk for choosing and co-hosting this workshop with us in Ireland. We hope that attendees had a pleasant stay and fruitful time in Ireland. 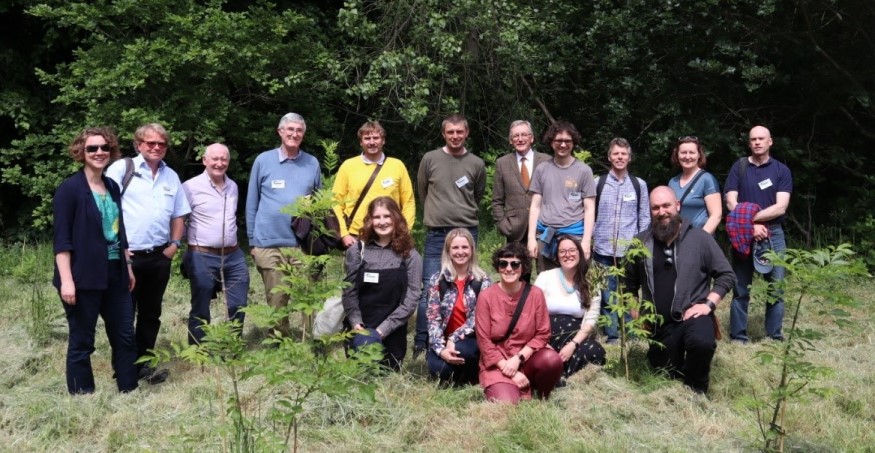 Group photo of attendees in the Ash gene-bank at Phoenix Park, Dublin