Guidelines for the management of productive Sitka spruce crops


Many crops of Sitka spruce planted in the 1990’s on out farms are now showing exceptional growth rates, which require earlier management than crops traditionally planted on more marginal ground. Dr Niall Farrelly, Teagasc Forestry Senior Researcher gives some guidance on the management of the crops.

Many crops of Sitka spruce planted in the 1990’s on out farms are now showing exceptional growth rates, which require earlier management than the crops traditionally planted on more marginal ground. In many cases these crops are suitable for first thinning at 15 years of age, due to the mix of good genetic stock resulting in rapid juvenile growth on favourable sites.

Many farmers who planted Sitka spruce crops since the 1990’s can expect shorter rotations with opportunities to achieve a log size of 0.7 to 0.8 m3 after 30 years. The key ingredients are good forest management and sensible thinning aimed at favouring straight trees that are defect free to grow into larger timber for commercial sawlog (prices range from €60-80 per m3).  Results of a Teagasc research thinning experiment in Frenchpark is now becoming available and has been used to assist in providing guidelines on how to thin and manage highly productive crops of Sitka spruce (yield class 30) with the aim of achieving commercial sawlog production. The research supported by the forestry advisory service aims to support best practice adoption in the management of farm forests. The first step in deciding whether to thin your forests is to familiarise yourself with the thinning operation, there is good advice available from Teagasc about first thinning here.

As a general rule Sitka spruce crops should be thinned on time where possible as it allows greater flexibility in management. While delaying thinning for 2 or 3 years can be considered for commercial reasons, it reduces the types of operations that can be carried out owing to the vulnerability of trees to windblow, especially on wetter soils. It may be necessary to consider the risk of windblow when considering thinning. Crops on wets soils, especially ion exposed soils should not be thinned. A nice tool which has been developed to assess the probability of windblow in your forest is available from COFORD. View it here.

Start planning for first thinning by assessing the readiness of your crop for thinning by measuring it and by consulting the Teagasc ready reckoner.

Thinning should ideally start when the average diameter at breast height (dbh) is 16 cm or greater, and the number of trees per hectare (ha) greater than 7 cm is at least 2000 per ha.

For many productive crops this will be at 15 growing seasons after planting. Thinning should be delayed by 3 years if the number of trees is lower than 2000 per hectare, until the average dbh increases to 18 cm.

The first thinning operation generally removes 1 line in every 7 planted lines (14.3% of the volume) which allows machinery access to the crop. The line removal reduces the number of stems by approximately 300 per hectare and provides for some pallet wood at first thinning but does little to improve the quality of the crop. Depending on site conditions and crop development the thinning prescription may warrant a light, medium or heavy thinning. Heavy thinning may be required to remove more volume, where the crop is overstocked, but it requires strict supervision and should not be practiced on exposed locations, wet soils or where stability is a concern. The industry standard is practice, a medium thinning which removes about one third of the volume in first thinning operations. A light thinning removes less volume and may be more suitable for crops where there are stability concerns. 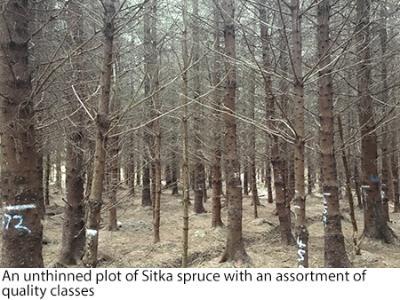 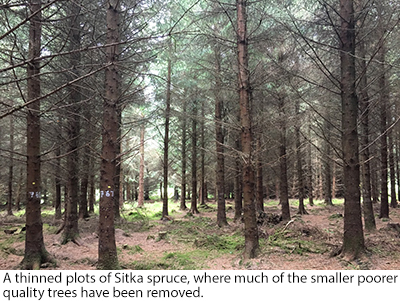 It is important that the thinning operation that takes place between the remaining six lines focuses on removing smaller trees. In addition poor quality trees which are forked, or only have the possibility of producing pulpwood assortments should be removed. Where heavier thinning is warranted, other trees competing with better quality trees may need to be removed to provide for increased growing space. A good thinning is one which increases the dbh of the remaining crop by at least 1 to 2 cm, otherwise the thinning will be considered neutral.

Volume removal in the Frenchpark experiment ranged from 50 to 73 m3/ha. While majority of the volume removed at first thinning is pulpwood (60 to 70%). Some palletwood is produced (20 to 30%) from heavier trees on the removed line, where better trees may produce one or two lengths of palletwood.  In terms of financial returns a light thinning may return €450/ha, a medium might be worth, €560/ha and a heavy thinning may be worth €610/ha, owing to a higher volume produced.

Subsequent thinnings and timing of clearfell

After a further 5 years the third thinning should be scheduled. The average dbh of the thinned crop should be in excess of 25cm.  By contrast the unthinned plots have an average dbh of just 21 cm. The aim of the third thinning is to reduce stocking by between 10 to 16% and create space for the trees to grow to commercial size. Following on from the first and second thinnings the light thinning should have approximately 1050 stems/ha; the medium thinning 825 stems/ha; and the heavy thinning about 694 stems/ha. It is not necessary to consider any further subsequent thinnings after third thinning as the average tree size is forecasted to reach 0.8 m3 at 30 years after which time final harvest can take place.

Increase in stem quality a key result of thinning

Thinning when carried out correctly allows the forest owner to divert valuable site resources to better quality trees, resulting in trees of higher value. Results from Frenchpark illustrate the benefit of thinning. Overall there is a significant an increase in the quality of with a greater percentage of straight logs in all the thinning treatments compared to the unthinned plots and as thinning intensity increases so those timber quality. For more heavily thinned plots, over 83% of the stems are capable of achieving at least a valuable 3 m straight log compared to 75% of the stems for the medium thinning and only 56% of stems for the unthinned plots. There is limited potential to influence the quality of trees in unthinned plots (Figure 1). 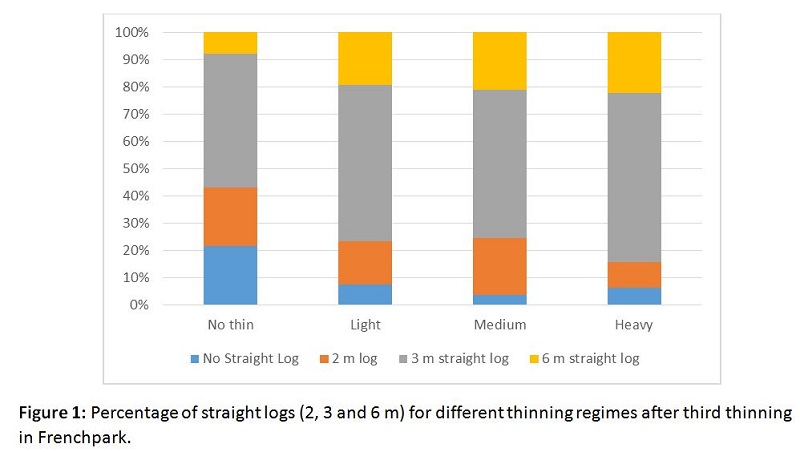 Overall thinning is a positive and necessary intervention in the forest and if carried out correctly should result in shorter rotations decreasing the time to harvest increased revenue returns for growers. The focus of thinning should be on the retention of trees with good quality traits and the removal of those with less value over the rotation. If one thinks of a forests in terms of products, the pulpwood is the first product to be taken out, then the palletwood is removed in the second and third thinning, leaving the sawlog for final harvest.