If you go down the woods today...…you shouldn’t see deer every time


The continuous deer population growth that has occurred in Ireland in the last 20 years has led to a situation where deer numbers may now be 200,000+ approximately. John Casey, Forestry Development Officer, Mallow takes a look at the impact of deer on forestry and at the SMARTDEER project and more

Deer find the Irish countryside a very favourable place to live and breed and with no natural predators, their populations continue to increase. Over the past 30 years or so, red deer have spread their range by some five or six times; the range of Sika has more than trebled, and fallow deer almost doubled (FORDEER project). There are limited reported sightings of Muntjac deer in the last few years as well.

The truth is that our understanding of deer population dynamics in terms of distribution and density, are very incomplete. What is clear is that in specific geographic areas, deer numbers are negatively impacting on –

While deer are an important part of the Irish countryside and its biodiversity, some of their activities result in in financial and environmental damage in forest and agriculture, as well as the potential road safety risks. The causes of deer population changes and increases include the expanding area of suitable woodland habitat, changes in agricultural practices, varied hunting pressure and sub-optimal population control.

Deer grazing impacts on Annex I habitats and Annex II species of conservation value, under the EU Habitats Directive, have can be very negative, especially were deer numbers exceed the carrying capacity of these habitats. The cascade effect of deer grazing on the biodiversity and tree species profile is of particular relevance both to commercial and environmentally- focused conifer & broadleaf crops. High deer population can enormously affect local flora, as illustrated by the image below of an unfenced and fenced woodland respectively. 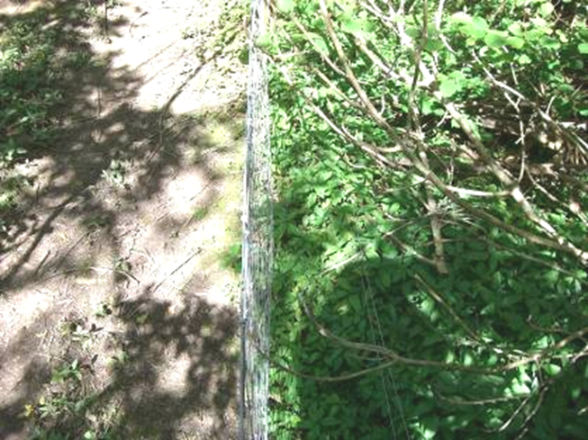 Selective browsing of deers’ favourite food plants can eliminate the natural regeneration of some species. Deers’ noted preference for most broadleaves and some conifer species such as Douglas fir, has led to foresters avoiding planting these tree species in vulnerable areas, reducing the overall forest composition. When large numbers of deer congregate on crops, considerable damage can occur through eating or trampling both of grass and cereals. It is worth noting that in DAFM’s National Forest Inventory 2017, biotic damage was recorded on 166,152 ha or 24.2% of the forest area.

Biotic damage = damage relating to or resulting from living organisms

Damage caused by animals (e.g. browsing by deer) was the most common biotic damage (37%), followed by harvesting operations (16%) and heather competition (15%). In terms of damage severity, 6,410ha or 3.3% of the areas with biotic damage present display critical levels of damage i.e. tree growth has been critically impacted and the damage agent is expected to kill trees in the future. Gill, et al. (2000 estimated that Sitka spruce (SS) commercial losses in Scotland in the range of 0.8- 8.4%, while the delayed Sitka spruce growth of one year due to browsing can result in a potential revenue loss of 3.4%. Closer to home, a 2009 Coillte report attributed 7- 22% commercial losses due to bark stripping in the Wicklow area.

While many went undocumented unless there was significant personal damage or injury, it is clear that a collision between a large deer and a vehicle could have serious consequences.

The potential biotic threat from deer-associated diseases is an issue that concerns all landowners, both forestry & agricultural, and contingency plans should be part of any deer management system. In Wicklow for example, part of the spread of Bovine Tuberculosis (TB) has been attributed to deer by some landowners. The incidence of TB in west Wicklow is higher the national average, and a Department of Agriculture pilot sampling of 103 deer carcasses in the Calary area of east Wicklow found that 16pc were infected with TB- often referred to as “spillover” hosts.

It is important to state that no definitive evidence has been found that links deer to the spread of (TB) in cattle.  The 2017 published results of a DAFM study of the prevalence of bovine viral diarrhoea virus (BVDV), bovine herpesvirus-1 (BoHV-1), suggest that the presence of these viruses in deer is not a significant risk to their control and eradication from the cattle population. Without further empirical data however, it is difficult draw final conclusions on the role of deer as a disease reservoir or spreader.

In specific areas, deer numbers need to be controlled. This control should be based on a well thought out management policy which should include:

Deer population management should be carried out by trained and qualified deer stalkers. Recognised training is provided by a number of organisations, under the Hunter Competence Assessment Programme (HCAP). Landowners should insist on licence and insurance details before consenting to individuals or groups shooting on their land. Both forestry and the overall farming sector need to develop a greater level of deer awareness, to improve deer impact monitoring techniques and reporting protocols as standard farming practice in acutely affected areas and to manage the deer population at a landscape level.

The UCD-led SMARTDEER project seeks to collate existing spatial data on deer across the country and to introduce two novel online tools able to collect new deer data in a nationally coordinated fashion. The intention is to develop models to describe current distribution and to predict their future shifts in dispersal and abundance. For those interested, further details can be found on the project website: https://sites.google.com/ucd.ie/smartdeer-ireland/home