Leaving a legacy - the many rewards of good forest management


Peter Reid is a forest owner near Clane, Co. Kildare, who has developed a beautiful oak forest for himself and future generations to enjoy. Liam Kelly, Teagasc Forestry Development Officer says there has been increased interest in the planting of more native species in recent years and explains why

Above: A view of the Oak forest

“A lot of hard but rewarding work has gone into the site to get it to where it is today,” says Peter. “I wanted to leave something enduring and of real worth to the next generation and beyond”.

In Ireland, there are almost 23,500 individual forest owners like Peter. The vast majority of those have planted over the last 25 years or so. At present, the private forest sector comprises over 268,000 hectares of grant-aided forest. Broadleaves account for 29% of the overall area (DAFM, 2021).

Landowners plant their land for a variety of reasons and objectives. These objectives may include timber production, water quality and biodiversity enhancement, carbon sequestration, improved work-life balance, efficient use of out-farms and other appropriate land use.

In recent years, there has been increased interest in the planting of more native species, high nature woodlands and adoption of ‘close to nature’ management.

In more commercial forestry, trees are initially planted at a high stocking e.g. 2,500 young trees per hectare in the case of conifers. However, with broadleaves species, the required stocking rate varies for different species ranging from 3,300-6,000 trees per hectare. The aim of initial high tree densities, especially in broadleaves, is to induce competition among trees to encourage straight growth, facilitate lighter branching, natural pruning and to allow a better choice of quality trees when thinning.

At maturity in commercial broadleaf forests, the objective is to have a final high quality crop of 150 to 200 trees per hectare depending on species with all the other trees having been removed in regular thinning interventions.

Thinning begins once the trees reach a height of 8-10m. Thinning is carried out regularly, every few years, once the canopy closes in again. Thinning allows more growing space for the better quality trees to develop. The result is a final harvest of large diameter sawlog material suitable for valuable high end uses.

The initial thinnings produce a wood supply of lower quality, but this can make terrific firewood or fuelwood while also facilitating good broadleaf management. Thinning represents a good investment in the final crop.

As an adviser, it is very heart-warming to come across a site that has been thinned appropriately and to see at first hand how the crop has responded so well to the thinning intervention.

In 1999, Peter and his late mother decided to plant some of their land. Peter said “We were farming approximately 40ha (100 ac) with mainly sheep and some tillage. Some of our ground had heavy soils, and we were disillusioned with the returns they were getting from farming. We wanted to try something different on a proportion of our land”. In March of 2000, they planted approximately half their farm by converting 19.2ha (48 ac) into forestry. They planted 15.2ha of Norway spruce, along with ash (1ha) and oak (3ha).

Peter has taken an active interest in his forest since it was established and benefitted from membership of the Kildare Forest Owner Group. He sees his forestry as being very much part of his whole farm. There is a planned pathway system through his forest, which facilitates recreational walking through the site. Family, friends and canine colleagues all regularly enjoy and appreciate this resource.

The Norway spruce has grown very well and is now due a first thinning. Peter and his colleagues have the plot well laid out with numerous inspection paths, which greatly facilitates access, monitoring and measuring of the crop. First thinning will be carried out as soon as the felling licence comes through.

The ash, which initially struggled to take off, has benefited from a recent fertiliser treatment. However, like most ash plantations, it is now showing signs of ash dieback disease, though its impact so far has not been as intense as I have seen on many other sites.

The oak plot, which consists of 3ha, is clearly Peter’s pride and joy - it is one of the finest broadleaf plots that I have ever come across. The oak was planted with a nurse species (European larch in every alternate line) at a stocking of 3,330 oak plus 1,250 larch per ha. Nurse trees are fast-growing trees which provide shelter to smaller trees and plants as they grow. The larch helped stimulate the growth of the oak in the initial years and reduced the cost of establishment compared with planting pure oak. However, care has to be taken that the nurse species does not smother the oak. 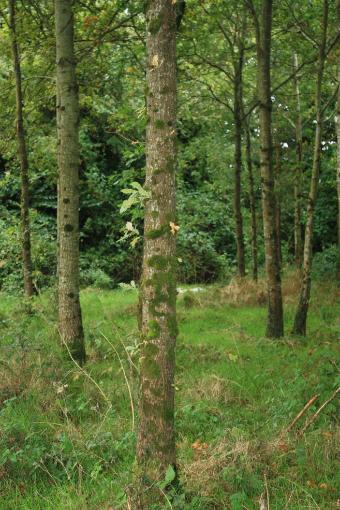 Photo: An example of an excellent oak tree

I visited this site for the first time in 2012. At that stage, the nurse species (European larch) was beginning to compete with the oak. However, when I visited the site earlier this summer, I could not believe how well the oak had performed. The straightness and vigour of many of the stems was a joy to behold.

The oak had really benefited from the two thinning interventions received in recent years. In late 2015, the all larch lines were removed by commercial machinery and sold for pulpwood. A second thinning was carried out by Peter and colleagues in 2017, when the oak stocking was reduced down to approximately 1,100 stems per ha. The top height of the oak is now approximately 12-14m. The inferior and competing oak trees were selected and removed in this thinning to provide more growing space for the better quality stems. Each of the remaining trees was also pruned up to at least one third of their height, which greatly adds to the beauty of the forest. 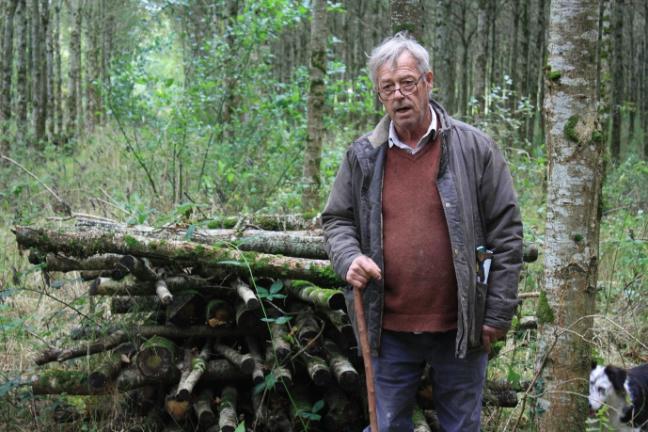 Above: Peter with a stack of timber currently drying in the forest

All the felled trees were cut into 2m lengths and stacked in the woodland. Keeping all of the logs up off the ground is important to facilitate drying. The logs are stacked in an open space within the woodland for 6-8 months before the complete stack is brought into the farmyard by tractor and buckrake.  The logs are then cut up by chainsaw, split and are allowed season for another few months in an open shed to facilitate further drying. The firewood is used to provide heating for both Peter’s and his brother’s house.

Peter is currently waiting for a licence to carry out a further thinning next year. The Norway spruce will be thinned by mechanical harvester. The oak will be thinned again and this will supplement the firewood supply for his own use while also benefitting the tree crop. Peter’s strong interest in his forest and its active management is clearly yielding rich dividends.