Rowan, Hazel, Holly and Hawthorn are native trees with rich ecological and cultural credentials which are adding a powerful ecological punch to the biodiversity of our new forests. Noel Kennedy, Teagasc Forestry Advisor, discusses the Native Woodland Scheme which recognises the value of these

Our native trees have been part of the Irish landscape for thousands of years. They benefit a huge range of wildlife—birds, insects, and small mammals—and are hosts to many mosses, lichens, and fungi.

The current Afforestation programme supports the planting of a wider range of trees in our forests with a particular emphasis on native trees to protect and enhance our native woodland resource and associated biodiversity. In 2021 over 40% of the trees planted in new forests were native species equating to over 2.5 million trees!

Rowan, Hazel, Holly and Hawthorn are well loved and recognised native trees but would be considered minor species in our planted forests. In recent years however the afforestation scheme has recognised the powerful ecological and environmental importance of these species as part of new forest planting.

The Native Woodland Scheme is the bespoke afforestation option to plant native trees. Using the native woodland scheme framework which identifies the main soil type, the associated woodland type and the relevant species mix, Sessile and Pedunculate Oak, Downy Birch and Alder are the most commonly planted native trees. However the framework also prescribes the planting of other native trees as individual/small groups including Rowan, Hazel, Holly and Hawthorn which are recognised as integral to natural woodland development across a range of site types.

In addition to the native woodland scheme, recent years have seen increased planting of Rowan, Hazel, Holly and Hawthorn as part of a minimum mandatory broadleaf requirement of 15% broadleaf trees for new diverse conifer forests. Planted along environmental setbacks at watercourses, roads and buildings the trees grow as a rich, biodiverse woodland edge which acts as a critical transition zone for plants and animals between setbacks and the forest habitat.

So let’s look at each of these native trees and what they offer in our new forests.

Rowan, Hazel, Holly and Hawthorn are considered to be smaller trees with typical heights ranging from 7-15 metres. All have adapted to grow on a wide range of site types including in the case of Rowan and Holly challenging upland soils. Not considered commercial forestry species what they lack in timber potential they more than compensate for by their huge ecological footprints. All species flower profusely providing a rich source of pollen for bees and later nutritious berries for birds and mammals in the autumn and winter. As they grow and especially within a native woodland setting their habitat potential for bird, mammals and insects grows and this in turn promotes the development of a rich and diverse ground flora.

Also known as the Mountain Ash (but not related to our Common Ash), Rowan adds colour to woodland throughout Ireland and across a range of soils. It is most commonly found on the hills where it will grow at a high altitude including on rocky ground. It has a rapid growth rate at first but slows down with age. Rowan does not grow to a very large size, rarely more than 15 metres when mature. The tallest recorded Rowan tree is 18 metres located in Glenstal Abbey, Co.Limerick.

The creamy flowers ripen into scarlet berries which colour early in the season and provide food for thrushes through the winter. A mistle thrush will defend a rowan tree as its territory, not for nesting, but through the winter as its feeding territory.

In the ancient Ogham alphabet Rowan is represented by the letter L (luis).

A native species with many uses and an ancient history, Hazel is most associated with limestone land such as the Burren and similar land with the potential for a rich ground flora of woodland flowers but will grow across a wide range of land types.

Planted in woodland edges in new forests or as part of a new native woodland, hazel will typically over time grow into a biodiverse shade tolerant understory layer, often with Holly, among taller trees including Oak.

Features of hazel that made it an important tree in ancient times were its strong flexible timber that was widely used for building shelter and the hazelnuts which were an important nutritious food source. The coppicing ability of hazel ensured that when a tree was cut to a stump it quickly re- grew.

Hazel is well known for its yellow ‘lambs tail’ catkins in spring, but the nuts grow from small bud-like structures with a tuft of red – the stigma of the female flowers.

In the ancient Ogham alphabet Hazel is represented by the letter C (coll). 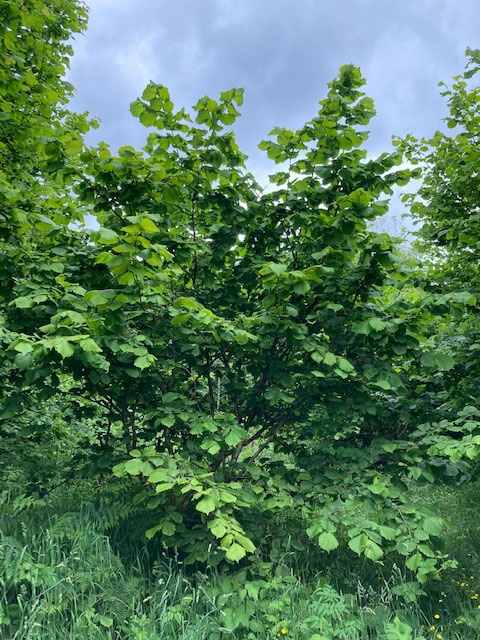 Holly grows almost everywhere apart from on very wet, poorly drained sites. It grows very well in temperate, oceanic climates and is thus perfectly suited for Ireland. It is very hardy, tolerates exposed sites and is well adapted to shade – it often grows as an understorey tree in woods. It prefers neutral to acid, peaty soils.

Holly is an evergreen trees. The leaves have a thick waxy surface, which helps it to resist water loss in winter when the tree cannot absorb any moisture from frozen soil but despite this the plant supports a lot of wildlife.

Typically, the leaves have sharp spines up to a height of a few metres. Above this, where they are not in danger of being browsed by animals, they have smooth edges.

Each holly is either a male tree or a female. To produce berries, the female flowers need pollen from a nearby male tree. Bees and other insects carry the pollen from one tree to another.

White flowers appear in May and June, which following successful pollination ripen into the iconic bright red berries in early winter. They provide good food for birds, which, in return, help to disperse the seeds.

As with Rowan and Hazel, Holly was revered and protected under the Brehon laws in ancient times and even today some people consider it unlucky to cut down a holly tree.

In the ancient Ogham alphabet Holly is represented by the letter T (tinne). 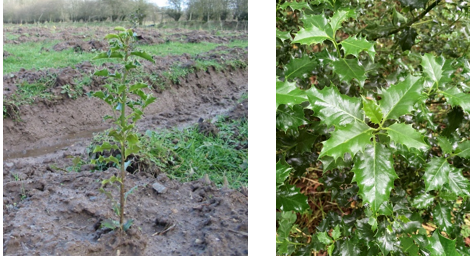 Also known as Whitethorn this is one of our most common native trees and well known to farmers as a traditional thorny hedgerow species. With over 200 plant-eating insects depending on hawthorn the ecological value of the tree is very high and makes it an ideal species to plant in our new forests.

Hawthorn is typically planted along forest edges in new diverse conifer forests or as individual/small groups in intimate mixture with Oak, Downy birch, Alder and other native trees in the Native Woodland Scheme.

With their berries one of the most favoured by birds, ss they are not cut back unlike farmland hedgerows, hawthorn growing in a forest setting can flower and fruit freely and provide maximum biodiversity enhancement along with the other native species.

Like the other native trees hawthorn has been associated through the ages with magic and enchantment including fairies and holy wells. Many of these beliefs persist to today among rural communities.

In the ancient Ogham alphabet Hawthorn is represented by the letter H (huath). 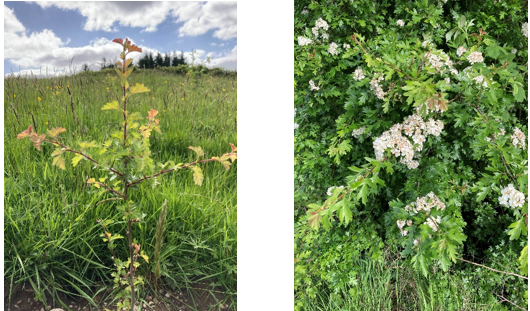 The planting of Rowan, Hazel, Holly and Hawthorn in our new forests is a clear acknowledgement of their important role in native woodland development and their ecological and biodiversity impacts in all our forests. Although smaller in number than other trees, their rich environmental pedigree will contribute handsomely to the long term health and vitality of Ireland’s forests.