The Kickham Project - bringing the community together


The Kickham Tree Project brings together local heritage with biodiversity and modern cutting-edge science, all in a rural Tipperary village. Michael Somers, Teagasc Forestry Development Officer tells us more about the Project. 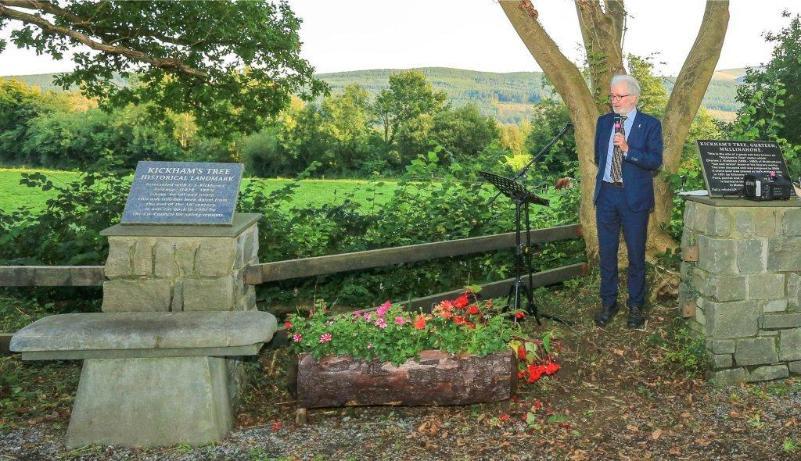 “The Kickham Tree Project” is a community-based initiative centred in the south Tipperary village of Mullinahone. The project itself is a partnership involving Teagasc, the Mullinahone community, Tipperary County Council and FBD Trust. It sets out to conserve a number of ash trees in the area, promote awareness of biodiversity and develop a legacy that was started over 200 years ago with trees planted by the Bryan family. As the trees grew they became part of local folklore through the writings of Charles Kickham one of Ireland’s leading literary figures of the 19th century. Kickham is fondly remembered for penning the ballad of Slievenamon (Tipperary’s county anthem). However, it was his 1873 novel Knocknagow that’s recognised as his most significant work. Many experts consider it as the definitive narrative of Irish peasantry before the Irish land wars of the 1880s.

Kickham and the Bryan Trees

In 1798 the Bryan family planted an array of broadleaf trees on their farm at Gurteen, Mullinahone. That year the ‘United Irishmen’ lead a rebellion against British rule in Ireland. The rebellion was ruthlessly quashed by Crown forces. This led to the Act of Union in 1801 which created a new country “The United Kingdom of Great Britain and Ireland”. Twenty-seven years later Charles Kickham was born in the center of Mullinahone.

The Kickham family were local business owners. Charles was home schooled and it was intended that he would pursue a career in medicine. However, the young Charles was influenced by his parents’ nationalistic political views. At that time there was a lot of opposition to the Act of Union in Ireland. Charles would become editor of The Nation newspaper. He would soon become a founding member of the Irish Republican Brotherhood. His membership of this oath-bound underground organisation resulted in him being sentenced to 14 years penal servitude. Most of Kickham’s prison time was spent in Pentonville Prison near London. In March 1869, he was released because of ill health.

At the time of his release, the Bryan trees were over 60 years old. The trees had evolved into a linear woodland intermixed with green pasture. On his return to Mullinahone, Charles Kickham would walk to these trees on the Mullinahone to Fethard road. He favoured one massive ash tree and would sit beneath the tree for hours writing. After his death in August 1882 that giant ash tree was christened ‘Kickham’s tree’ in his honor. The tree became a local attraction over the next century. Unfortunately, this giant ash tree was cut down in 1992 for safety reasons. A stump remained but this was fully removed in 2009.

During the 2019 Kickham festival a group of locals were looking at ways of protecting the trees in this area. The group wanted to preserve the legacies left by both the Bryan family and Charles Kickham. An idea was born to create a small project to showcase nature, biodiversity, trees and culture with the famous writer at its core.

The three steps of the Project

The project has three distinct phases:

Ash dieback is a serious fungal disease of ash trees. It was first noted in Ireland in 2012. The ash trees around Mullinahone and its surrounding areas have been badly affected by the disease. Many of the ash forests established since 2000 have been removed. However, it was noticed that the ash trees planted by the Bryan family all those years ago –appear healthy and disease free. These trees were planted with the original Kickham tree and probably share the same gene pool. So the project will continue to monitor their health status.

In order to develop the project further Dr Miguel Nemesio-Gorriz, at Teagasc Ashtown was contacted. Dr Nemesio-Gorriz has been to the fore in leading research into selecting and breeding ash trees for resistance to ash dieback disease. Shoots from the ash trees on site were collected last February. These shoots were grafted on to new root stocks. This gives rejuvenated versions of each tree so their individual lifespans will be extended. In addition, the health status of these trees will be easier to monitor in the coming years. Perhaps some of them will emerge as resistant, for it is unthinkable that ash trees would ever disappear from this inspired place. It is planned to plant these rejuvenated versions of the original trees on the site in 2023 to celebrate the 150th anniversary of the publication of Charles Kickham’s renowned novel Knocknagow.

The hedges surrounding the Kickham tree site had no longer fulfilled their basic function as a livestock barrier. It was decided to lay both hedges at the site to create a livestock barrier, promote a healthy hedge and encourage biodiversity. Hedge laying expert Eoin Donnelly finished this work in February 2020. A unique feature of hedges in this part of Ireland is that holly is a dominant species. Holly is a difficult species to lay successfully. Each stem was cut and laid against the fall of the land. They were interwoven in a linear fashion with locally sourced hazel rods. During Charles Kickham’s early life in Mullinahone, this type of hedge laying was used extensively in South Tipperary.

So far, the hedge has reacted well to the laying. Growth rates in 2020 have been excellent. The holly is doing very well; as are the other species, such as hazel and whitethorn. Other flowering and shrub species are also colonising the hedgerow including Guilder rose and Woodbine. The local Heritage Officer in Tipperary County Council, Roisin O’Grady, plans to use the site as an educational resource for Tidy Towns groups and schools in the county.

The final phase of the project will be carried out by renowned artist Pauline O’Connell. Pauline is a PhD Candidate at Universiteit van Amsterdam. Her previous work includes ‘Drawing the Water’ which was commissioned by Kerry County Council in 2015, ‘The Milk Well’ and ‘The Tea Well’, which was based in Co Leitrim in 2017. Pauline will establish an artistic installation to commemorate the site’s past and cherish its future. The artwork will look at the Bryan’s legacy, Kickham’s literary activities, and how farming and forestry have co-existed in South Tipperary for centuries. The artwork will be created from natural material and will embody the true spirit of the project. In addition, there will be a small area put aside for parking cars.

As part of National Heritage Week 2020 Minister of State for Heritage and Electoral Reform, Malcolm Noonan, TD, visited the Kickham tree site. Minister Noonan, spoke about his hopes for his new role. He said that “heritage can be passed from generation to generation but through the work of Teagasc can be improved on. Heritage week is about promoting awareness of our built, natural and cultural heritage and promoting common cultural heritage. This project ties those components together”. Teagasc Regional Manager for Tipperary Donal Mullane said: “We are delighted to have some input in this. Heritage is important, this project brings together local heritage with biodiversity and modern cutting-edge science. It can be used as a model for other communities to follow”.